GOP lawmakers want nothing to do with Giuliani and his conspiracy theories: report 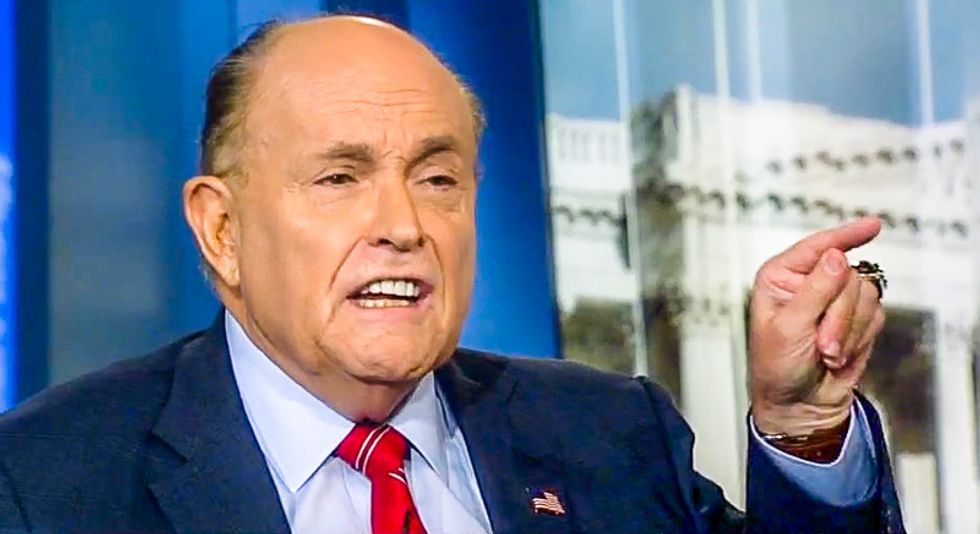 According to a report in the Daily Beast, GOP lawmakers are refusing to meet or communicate with former New York City Mayor Rudy Giuliani as the impeachment of Donald Trump heads to the Senate for a trial.

Although several House members -- Reps. Jim Jordan (R-OH) and Louie Gohmert (R-TX) have repeated Giuliani's debunked conspiracy theory that Ukraine hacked the 2016 election to help former Secretary of State Hillary Clinton, Republican senators are taking great pains to not be associated with him.

"In the weeks leading up to their impeachment trial, senators on Capitol Hill are actively avoiding meeting with President Donald Trump’s personal attorney Rudy Giuliani—partly because they fear he might try to pass off Russian conspiracy theories as fact, according to interviews with more than half a dozen Republican and Democratic lawmakers and aides," the report states. "Various lawmakers, as well as administration officials and national security brass, have privately expressed concerns about Giuliani's latest Ukraine jaunt, given that the Trump lawyer's efforts are what helped create this Ukraine scandal and get the president impeached in the first place."

Noting that both "Democrat and Republican senators have steered clear of the president’s personal attorney over concern that the information he is trying to disseminate originated from figures in Ukraine known for spinning the truth or spreading outright lies," the Beast reports that lawmakers' concerns go beyond just his conspiracy-mongering.

“Rudy Giuliani long ago lost any shred of credibility, especially after the dossier he assembled for the State Department stunningly mirrored Russian propaganda,” explained Sen. Bob Menendez (D-NJ). “Knowing that, anyone that attempts to defend President Trump’s behavior by citing Rudy’s information over our own intelligence agencies is simply irresponsible, uninformed or willing to be that useful idiot the Kremlin desires.”

Pointing out that Senate Majority Leader Mitch McConnell (R-KY) has also not spoken with Giuliani, who is serving as Trump's attorney, the report notes that lawmakers are wary of Giuliani's blundering about.

“'I wouldn’t trust Rudy to represent me in a parking dispute so I’d say avoid,' a senior GOP Senate aide said tersely when asked if it was a good idea for Republican senators to meet with Giuliani to get a Ukraine briefing," the report states. "Another top aide in a different Republican office said their senator had informed staff that they had 'no interest at all' in meeting with Giuliani on this, fearing it would amount to a 'waste of time,' if not something worse."

Still, another worried about Giuliani's sloppiness.

“'I do not want my name showing up in a [news] story about what Rudy and the president discuss,' said one senior White House official. 'I don’t want my text messages with [Giuliani] being all over cable news,' this official continued, referencing the incident when Trump’s personal lawyer went on Fox News and unveiled texts sent between him and Kurt Volker, the former U.S. special envoy to Ukraine," the Beast reports.