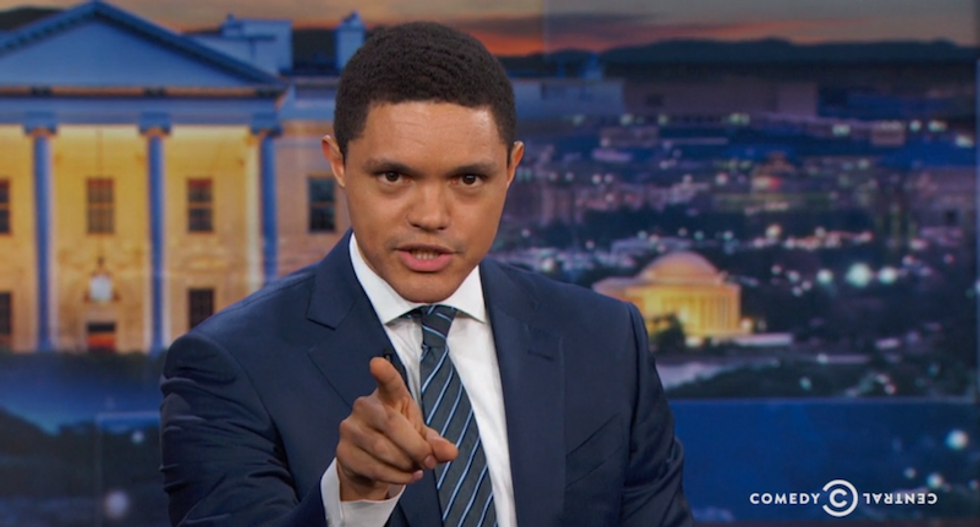 When Jon Stewart left the "Daily Show" on Comedy Central in 2015 comedian Trevor Noah took over and the reviews weren't great. At the start, even this writer wasn't impressed, despite a deep appreciation for Noah's stand-up. Ratings dropped and Larry Wilmore credited the host's transition with the reason his show was eventually canceled. After a few years, however, the Daily Show has finally begun to find it's way and the voice audiences wanted.

One of Noah's greatest challenges was fighting to prove that he could maintain the comedy standard viewers had come to expect under the former host. At the same time, Noah was competing with far more news comedy shows than Stewart did when he took over from Craig Kilborn in 1998. Former "Daily Show" legends like Stephen Colbert, John Oliver and Samantha Bee were going strong as were the regular network late-night shows.

Noah, has proven he has a strong stand-up game, but as Slate TV critic Willa Paskin explained in 2016, the network wasn't sure what he was especially good at. Trying to force Noah into the Stewart mold didn't work. Obviously, a decision was made to craft the show around Noah's style and humor and play off of his telegenic sparkle.

One of the best examples of Noah's success was the epic owning of conservative media personality Tomi Lahren, who Noah managed to takedown with the perfect mix of compliments and logic. Lahren was once a rising star in the conservative movement and scored a lucrative contract at Fox News. She hasn't exactly done well as political issues have grow more complex, requiring more information and understanding. Her commentary is so infrequent and filled with useless platitudes that that even progressive publications ignore mocking her. Her downfall can't be isolated to Noah's interview, but it certainly sparked the beginning of it.

In a March Washington Post interview, Noah credited his new-found "groove" to President Donald Trump, who is giving comedians much to work with.

“With Trump came a sharpened focus, because he very actively has gone after almost every issue, to the point where it’s almost like he’s the cliched villain,” he said. “I think he’s given us a target to aim at, which has been great for the show and for us as human beings. I read more. I engage more. I try and inform myself as much as possible, because when you’re living in a world where there is no reality, you have to try and create one for yourself.”

Another underrated contribution is an incredible digital game. The "Daily Show" is quick to drop videos, memes, jokes and more to contribute to the online conversation.

During the impeachment vote, the show compared it to the Vatican deciding a pope, with orange smoke billowing out from the U.S. Capitol and congratulated the president on finally winning the popular vote of something.

BREAKING: Orange smoke is billowing from the Capitol signaling a Trump impeachment https://t.co/BNV6rdtTry
— The Daily Show (@The Daily Show) 1576718217.0

It isn't isolated to Republican attacks either. During the PBS Democratic Debate, the "Daily Show" team was churning out hilarious quips.

Their trolling of Fox News has similarly contributed to scores of retweets and laughs along with them.

In one conversation, a Trump supporter admitted he doesn't need to read anything because, "I trust the word of our president, man."

With a collection of talented supporting comedians behind him striving to create new ways to make people laugh at the daily lunacy of the political system, the show is finally coming into its own.

Noah has managed to create a new kind of "Daily Show" that isn't a bastardized version of Stewart's hilariously bad impressions of Mitch McConnell and Lindsey Graham.

“I think that for sure Trump is to Trevor as Bush was to Jon Stewart,” said correspondent and comedian Roy Wood Jr. “The thing that’s dynamically different, I think for Trevor’s tenure versus Jon’s rise is just how deeper the playing field is in terms of competition. There are a lot of shows that are out there that are thankfully shining a light on a lot of the bulls--- that’s going on in the world. I know that Jon Stewart’s ‘Daily Show’ had whatever their sets of challenges were in the early aughts, but I just think what we’re facing now is something that’s definitely unique to the landscape as it is now.”

Do yourself a favor and watch a few new "Daily Show" episodes in 2020. After all, we need all the comedy we can get.