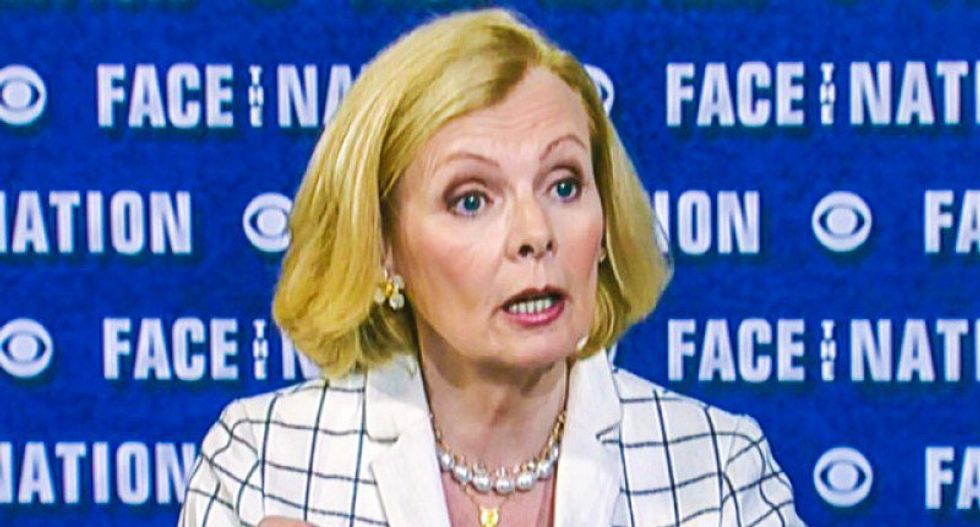 In a Thursday evening column, far-right commentator Peggy Noonan agreed that there should be witnesses called in the impeachment trial.

CNN capitol correspondent Manu Raju reported late in the evening that Sen. Lisa Murkowski (R-AK) was leaning against calling witnesses because it would be opposed by the White House and they will fight it at all costs.

"So, the Republican position is you can't investigate the president for obstruction because he's still obstructing," Toobin shouted.

Bernstein agreed, saying that it's clear Trump is trying to shakedown the Senate in exactly the same way that he did with Ukraine President Volodymyr Zelensky.

"I believe the president is guilty of shaking down the government of Ukraine for personal political gain, that he has rightly been embarrassed for this, and that the fit final punishment with an election coming was censure, not impeachment," wrote Noonan. "But we are where we are, and the proceedings can be enriched if both parties unclench and let this thing broaden out."

The tit-for-tat argument is that both sides should be entitled to whatever witnesses they want. For example, Democrats want to call John Bolton, who called the Ukraine scheme a "drug deal." It's that kind of first-hand account of the bribery between Trump and Ukraine that the House managers want to ask questions about.

Republicans, by contrast, want to bring in former Vice President Joe Biden, who was the enforcer of the U.S. policy to get rid of a corrupt actor in Ukraine that the global community agreed was making things worse in the country.

It isn't exactly a fair, tit-for-tat, as Biden is part of a conspiracy theory that Trump and his attorney Rudy Giuliani has drummed up. If Republicans want to call Biden, a true exchange would be that Trump would also testify.

"On this, the parties are at loggerheads, in stalemate," Noonan said. "Senate Democrats would like certain witnesses but not others. They think they’ve made their case—why open it to unexpected hazards? You never know what will be said in testimony. Republicans don’t want new witnesses. The House had plenty of them, questioned them, drew up the articles based on their testimony. The Senate is here to weigh them, not develop new evidence. Also there are aspects of executive privilege."

She also argued that Democrats and "History would want" to hear the testimony of Mick Mulvaney, who admitted on national television that Trump did bribe the Ukraine president, saying, "get over it."

"In return for Mr. Mulvaney, Republicans should want Rudy Giuliani," wrote Noonan. "Many of Mr. Trump’s supporters hope for a colorful, even intemperate defense of the president. Rudy’s their man. If Ukraine was a drug deal, it looks as if he ran the cartel. Get him in and under oath. First question: What were you doing?"

In the end, she conceded that there will never be 67 people willing to convict the president, even if they admit what he did was wrong. However, she said that History deserves to at least have a legitimate trial.

Biden has said he has no intention of testifying because he doesn't want to turn the trial into a "farce."

Read her full column at the Wall Street Journal.