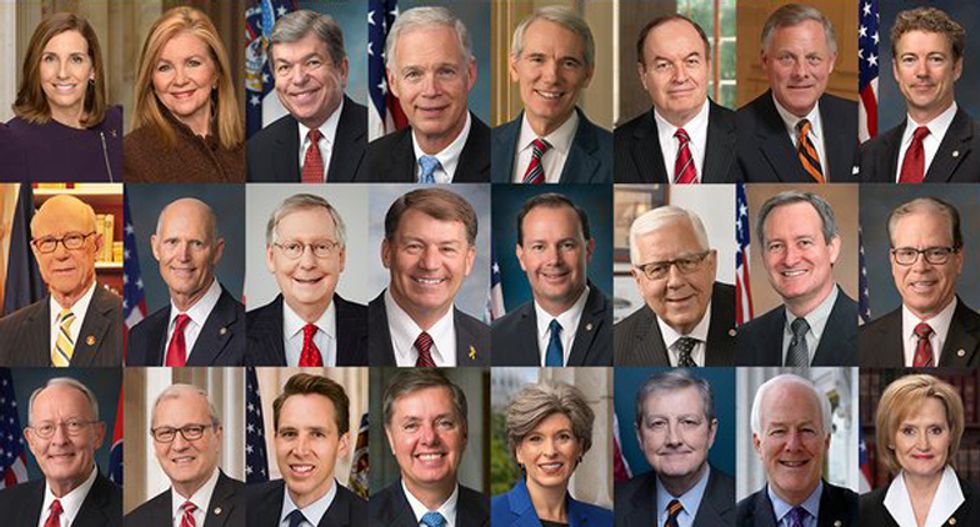 Using the hashtag #ImpeachmentTrialSham -- which was trending at #1 nationwide on Twitter -- Kimmel posted a composite image of the 51 GOP senators who voted against allowing witnesses.

Kimmel said, "This is what the wrong side of history looks like."

Republicans have been receiving harsh criticism for the vote.

This is what the wrong side of history looks like. #ImpeachmentTrialSham https://t.co/GAr9NFUeLD
— Jimmy Kimmel (@Jimmy Kimmel) 1580512340.0

Republican National Committee Chairwoman Ronna McDaniel won reelection on Friday despite the fact that her party has suffered three consecutive disappointing election cycles in which it lost the House of Representatives, lost the White House and the Senate, and then regained the House by an unexpectedly slim margin.

Given this record, McDaniel drew challenges to her leadership from attorney Harmeet Dhillon and MyPillow CEO Mike Lindell, neither of whom were able to round up enough votes to topple her in the final vote tally.

The Biden administration says 11 eleven countries in the Western Hemisphere have initially signed up into the Americas Partnership for Economic Prosperity, in what officials called a “historic” initiative to drive economic growth and cooperation in the region. “We view it as a historic new initiative to drive economic growth in the hemisphere, and tackle the core issues that will define the coming decades and galvanize greater economic cooperation in our hemisphere,” a senior administration official told reporters Thursday. The group of countries joining the partnership — Barbados, Canada, Chi...