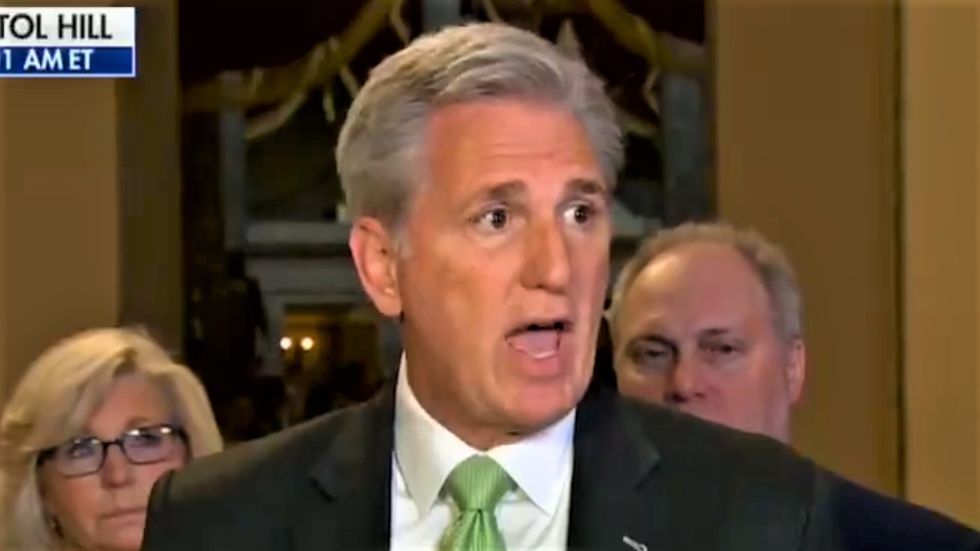 House Minority Leader Kevin McCarthy (R-CA) on Thursday tried to distance himself from Lev Parnas, but found himself getting busted by a reporter for misstating his relationship with the indicted Rudy Giuliani henchman.

After Adam Klasfeld of Courthouse News asked McCarthy to describe his interactions with Parnas, the top House Republican downplayed his meetings with Parnas as a chance encounter.

"I guess I met him one time, he came to an event, took a picture," McCarthy said. "I do events every single day, I do pictures with thousands of people all the time. And the money, when we found out he donated it to the campaign, we donated it to charity."

Klasfeld, however, has found at least two separate events where both McCarthy and Parnas were in attendance.

"In the pictures below [with Parnas], McCarthy was wearing a suit," Klasfeld wrote on Twitter. "In the story linked here, McCarthy is wearing a tuxedo at a gala where Parnas and Fruman were honored."

Parnas in 2018 donated $2,700 to McCarthy's reelection campaign during a time when prosecutors allege he was funneling foreign money into the United States to make illegal campaign contributions.

Watch the video of Klasfeld and McCarthy below.