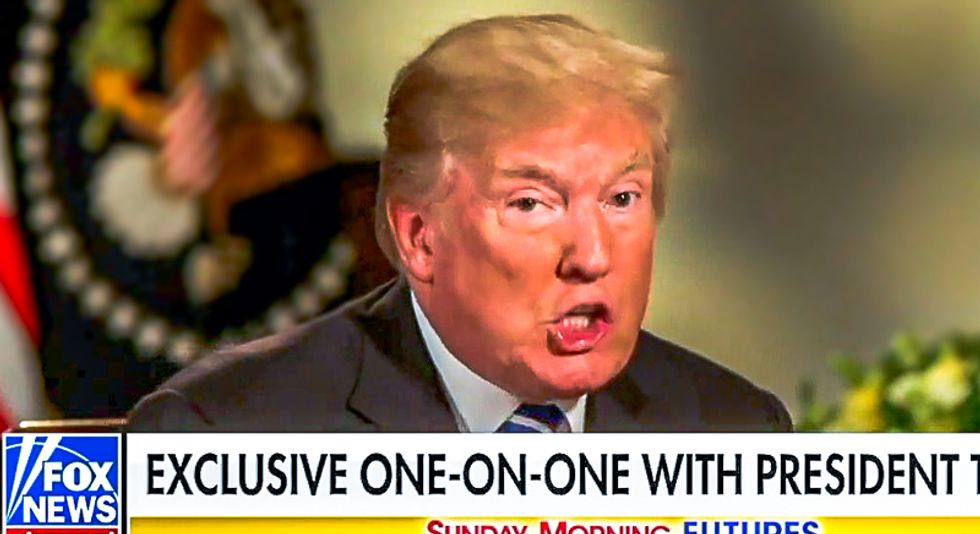 The cable network which recently paid for Rudy Giuliani to investigate conspiracy theories in Ukraine is again at the center of attention after a bombshell Wall Street Journal story published on Friday evening.

"Allies of President Trump are pursuing an effort to acquire right-leaning news channel One America News Network, according to people familiar with the matter, in a bid to shake up a conservative media market that has been dominated by Fox News," the newspaper reported.

"The investment firm Hicks Equity Partners is looking to acquire the channel and is pitching other wealthy GOP donors to arrange a bid of roughly $250 million for the channel’s parent company, the people said. The firm is owned by the family of Thomas Hicks Jr., co-chairman of the Republican National Committee and a close friend of Donald Trump Jr." The Journal added.

The network was blasted by MSNBC anchor Rachel Maddow for reportedly sharing staff with the Kremlin, but in December, Trump himself urged his supporters to sign-up to pay the network $4.99 per month to watch One America News on Facebook.

"The efforts come as Mr. Trump has repeatedly rebuked Fox News for being too critical—despite its opinion-show hosts’ general support of his administration—and has praised One America News Network. The channel’s opinion programming is known among its cable-news peers for its praise of Donald Trump and its advocacy for conservative causes," The Journal reported.

Fox News has been criticized for acting like state television during the Trump administration.

"One America News Network draws a fraction of the viewers of the cable news industry’s titans—including ratings leader Fox News, MSNBC and CNN—and isn’t widely distributed to American households," the newspaper noted. "The Hicks firm would bring in new management, upgrade production values and offer coverage that caters to viewers whose political outlook is in the center and right-of-center, segments it views as underserved, the people familiar with the matter said."

Doug Deason, a Dallas investor who has donated to the Trump campaign, said in an interview that he is planning to join the bid," The Journal reported. "The Hicks firm also plans to pitch Todd Ricketts, the RNC finance chairman, according to a person familiar with the matter."