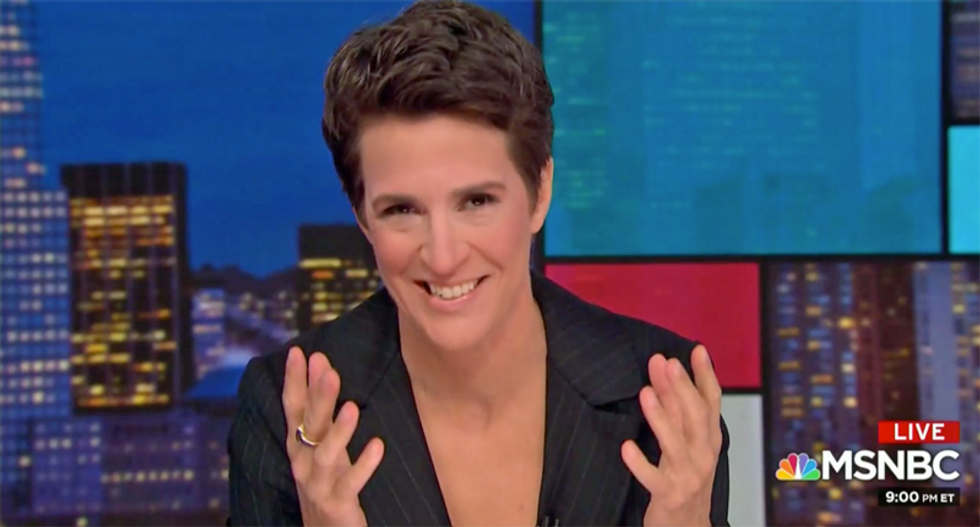 Republicans have far more power than they think, MSNBC host Rachel Maddow said after the impeachment vote on Wednesday.

She played the speech by Sen. Mitt Romney (R-UT), who cited his faith as the reason he must uphold his oath and vote to convict the president. Trump, his son, and his supporters have already lashed out like a 2-year-old throwing a tantrum on the floor of a toy store.

"The White House freakout over Sen. Romney's decision was reportedly in part because they had no idea he was going to do this," Maddow reported. "The freakout was swift and sort of telling. Boy howdy, do they yelp when anyone stands up to them on their own side. Republicans have no idea the power they have over this president if they only ever chose to use it. Any time a Republican stands up to him, he backs right down. And the white house trembles."

Yet, Maddow said she doesn't expect Republicans have learned anything at all from this process. "They're all so scared."

She went on to report that when Romney was giving his speech, Trump was about to welcome in the press for a photo-op with the Venezuelan man denied the presidency by Nicolás Maduro. It was swiftly canceled, knowing that it would be the first question for Trump, and it would end up a PR disaster.

"Within minutes the president's eldest son and namesake was calling for Mitt Romney to be expelled from the Republican Party," Maddow said. "And then later in the afternoon, the president started tweeting out an anti-Mitt Romney video that calls Romney a secret asset for the Democratic Party."

She recalled that Romney said in his speech that he would come under attack, but that his faith comes first and his oath was before God.

See her full commentary and wrap-up below: