'A weak man with delusions of competence': Trump buried for lying his way through the daily pandemic press conferences 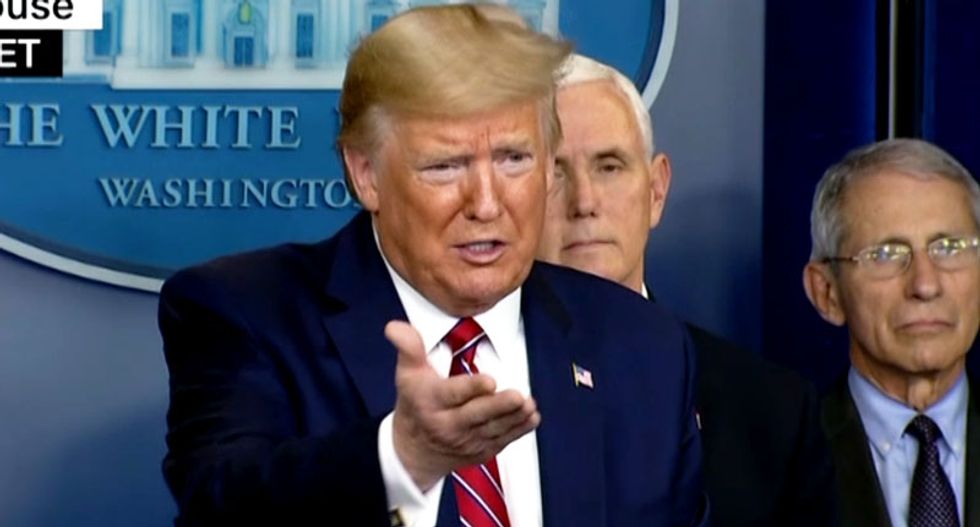 In a brutally blunt piece for the New York Times, columnist Jennifer Senior went scorched earth on Donald Trump for his lie-filled performances in the now daily press briefings on the coronavirus pandemic -- suggesting the media call them what they are: presidential "propaganda."

Following a day when the combative Trump attacked NBC reporter Peter Alexander for merely asking what he could say to the public that is living in fear of the pandemic, Senior said enough is enough.

"In a time of global emergency, we need calm, directness and, above all, hard facts. Only the opposite is on offer from the Trump White House. It is therefore time to call the president’s news conferences for what they are: propaganda," she wrote. "We may as well be watching newsreels approved by the Soviet Politburo. We’re witnessing the falsification of history in real time. When Donald Trump, under the guise of social distancing, told the White House press corps on Thursday that he ought to get rid of 75 to 80 percent of them — reserving the privilege only for those he liked — it may have been chilling, but it wasn’t surprising. He wants to thin out their ranks until there’s only Pravda in the room."

According to the columnist, Trump's press conferences are full of bluster and lies and stand in stark contrast with those being held by Gov. Andrew Cuomo (D-NY).

For many, Friday's contentious press conference should be the tipping point for most journalists.

"At his Thursday news conference, a discussion of chloroquine and other experimental therapies formed the core of his remarks, when those drugs and therapies are untested and unproven and, in some cases, won’t be ready for several months, as NBC’s Peter Alexander pointed out the following day," she recalled. "'What do you say to Americans who are scared?' Alexander pressed. 'I say that you’re a terrible reporter,' Trump answered. Only a liar — and a weak man with delusions of competence — would be so unnerved by the facts."

"Most dangerous of all is Trump’s insistence that things are fine, or will be shortly, that they’ll be stronger and better and greater than ever. We don’t have any evidence that this is true, and the president finds any suggestion to the contrary quite rude. When a journalist pointed out to him on Thursday that the economy had all but ground to halt, Trump cut him off," she explained. "Here’s the truth: Things might be hard — unfathomably hard — for months, perhaps even north of a year. Anyone who’s reading or listening to other sources of news besides the president knows that. It takes sensitivity and strength and intelligence to speak truthfully to the public about imminent hardship, the prospect of enduring pain."

Then came the Cuomo comparison.

"I listen to Cuomo, who says the same thing. His news conference on Friday was about the practical things, knowing the entire state — country, globe — had just taken a precipitous slide down Maslow’s hierarchy of needs, with food, shelter and safety now topmost on many people’s minds. No one can evict you for 90 days. We’re getting hospital beds. We’re recruiting doctors and nurses in training to fight this fight, and we’re coaxing medical professionals out of retirement," she wrote. "Then he spoke from the heart. One of his daughters was in quarantine. 'To tell you the truth, I had some of the best conversations with her that I’ve ever had,' Cuomo said. She was alone for two weeks. 'We talked about things in depth that we didn’t have time to talk about in the past,' he continued, 'or we didn’t have the courage or the strength to talk about in the past — feelings I had, about mistakes I had made along the way that I wanted to express my regret and talk through with her.'"

"He was expressing fallibility. Imagine that," she concluded.