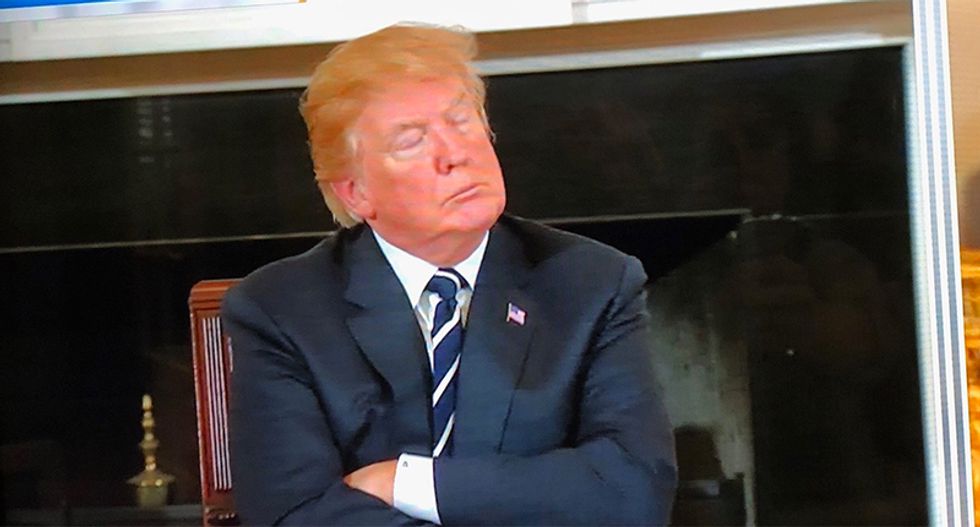 President Donald Trump demanding that Ukraine help him attack former Vice President Joe Biden was the source of his impeachment, and Wednesday's MSNBC panel anticipates the president is about to go after it again.

In wake of Biden's successes at the polls and his slight delegate lead, Associated Press reporter Jonathan Lemire explained that Ukraine is about to come back.

"Publicly the president is eager for this fight. He believes that Bernie Sanders, the one he's been publicly chanting for, he's a socialist, [Trump] thinks he's out of step with a lot of the country, and jin up among the lefts that was rigged against Bernie Sanders, in the hope that some of Bernie's hardcore supporters might stay home," said Lemire.

While he wishes for Sanders, however, Trump has always been preparing for Biden, as evidenced by his Ukraine scandal. Trump even tried to link Sen. Mitt Romney (R-UT) to the Ukraine conspiracy.

"They do believe, as a Trump operative told me in an overnight text I woke up to this morning, 'Get ready for the name Hunter Biden to be back in your lives again,'" he continued. "It led the president to be impeached. They're going to make the assertion the Biden family, their dealings were corrupt. There's no evidence of that. No one has been charged with wrongdoing. But they're still going to use that playbook. They're going to paint Biden himself as someone who's prone to a lot of gaffs and mixing up of names and so on."

During the 2016 election, Trump started conspiracy theories about Hillary Clinton and Russia, there were Trump supporters claiming Clinton was running a pedophile ring, Trump headlines were even saying that Clinton would be dead within the first six months of office. They'll likely recycle the same allegations, regardless of whether the nominee is Biden or Sanders.