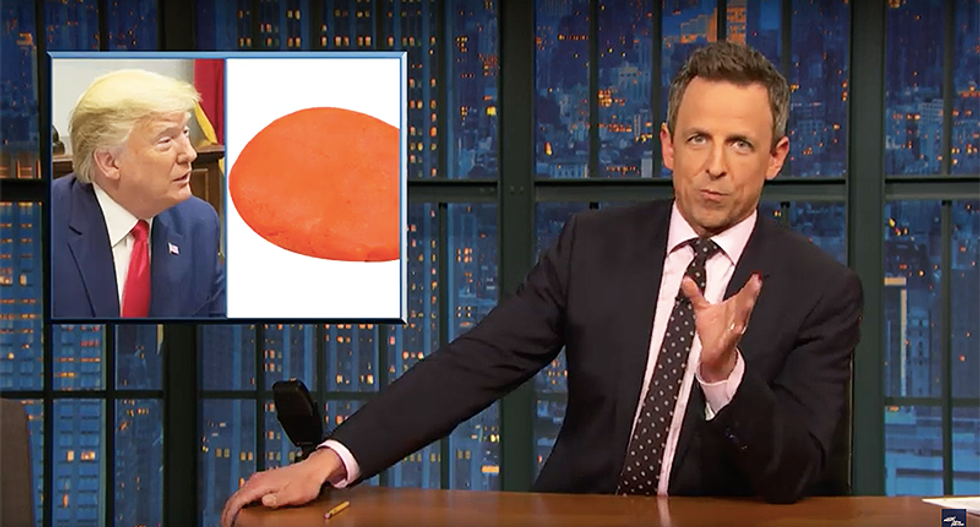 "Late Night" host Seth Meyers joined with many television personalities in echoing the sentiment not to touch your face when your hands are covered in possible coronavirus germs. But there's one face he really wants to touch: Donald Trump.

The president said Wednesday that he hasn't touched his face in weeks and that he misses it.

"OK, first of all, that can't be true, otherwise how did this happen?" Meyers said, showing a photo of Trump's glopped-on face bronzer. "If you didn't put all that bronzer on your face, how'd it get there? You look like you went to Sephora for a free make-up tutorial, and it just went horribly wrong."

That's when Meyers dropped the truth-bomb:

"You may not have touched your face, but I would love to touch your face," he confessed. "Just to see what the texture is like. Is it like a sponge or an old pancake? When you press on it, does it bounce back like a foam mattress, or did you get stuck in place like Silly Puddy?"

He ultimately wondered if he rolled Trump's face on a comic strip if it would show Calvin and Hobbs imprinted on his cheek.

Meyers went on to mock Trump for trying to blame former President Barack Obama for the coronavirus problems he's had. There was no coronavirus when Obama was president, not that facts are given priority by the president.

"Seriously, who's Trump going to blame next? Hillary Clinton?" Meyers asked before slipping into his Trump impression. "I heard a rumor that one of Hillary's missing emails had the subject line 'SECRET PLAN TO SPREAD CORONAVIRUS!'"