Trump's new chief of staff mocked by GOP insiders for history of causing as many problems as he solves: report 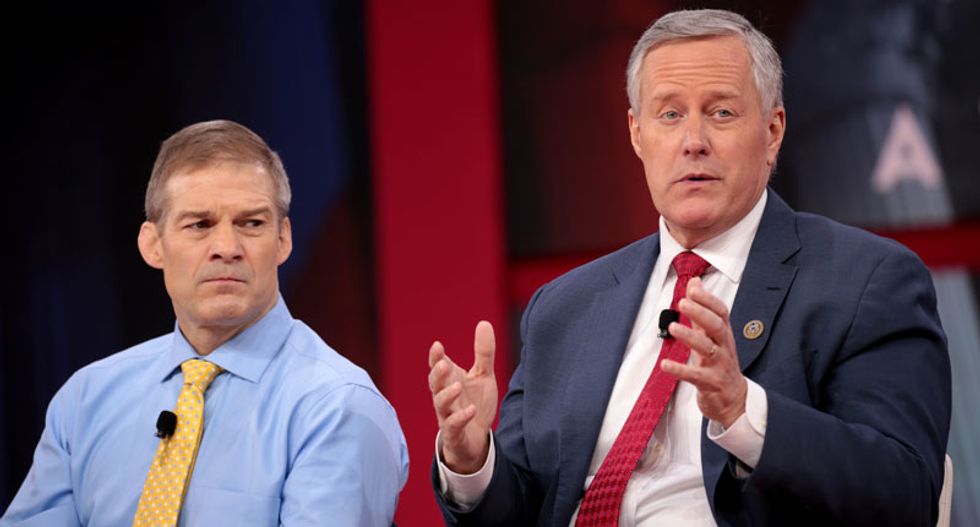 According to a report from Politico, GOP insiders are already sniping at Rep. Mark Meadows (R-NC) who has been tapped to be Donald Trump's latest White House chief of staff, with some noting that he causes as many problems as he solves.

With former White House Chief of Staff Mick Mulvaney being sent off by the president on Friday, Meadows, one of the most prominent members of the conservative Freedom Caucus, is being brought in to help the president as he tries to win re-election in November -- and the Republican has more than a few detractors in his own party.

Politico's insider "Playbook" reports, "Mark Randall Meadows, the new White House chief of staff, has a knack for hatching plans to solve problems. The catch is, his time in Congress has seen problems at least partially of his own making: government shutdowns he egged on, health care bills he scuttled and leadership brawls that he, at least tacitly, encouraged. You might say that he has sometimes played both the arsonist and the fire brigade."

The report notes that Meadows has a history of behind-the-scenes maneuvering that might serve the president well -- but there is a hitch with the report describing the North Carolina lawmaker as a "top-notch fraud."

"Meadows' detractors -- and, yes, there are some, mostly in the GOP -- see this job as the ultimate moment that will finally reveal the North Carolina Republican as a top-notch fraud who couldn’t find his way out of a wet paper bag. And, to be fair, he has never managed a crisis like this, so he’s starting with quite the challenge staring him down," the report continues before adding that, "There are big questions that need to be answered before understanding whether this is the right fit for Meadows. Trump viewed Meadows as the keeper of his creed on Capitol Hill -- a man who controlled two dozen votes in the GOP majority, and thereby had veto power over almost anything Trump didn’t like. Will Trump view him as an aide in the White House who is there to serve him, or as a quasi-principal who still has independent power of his own?"