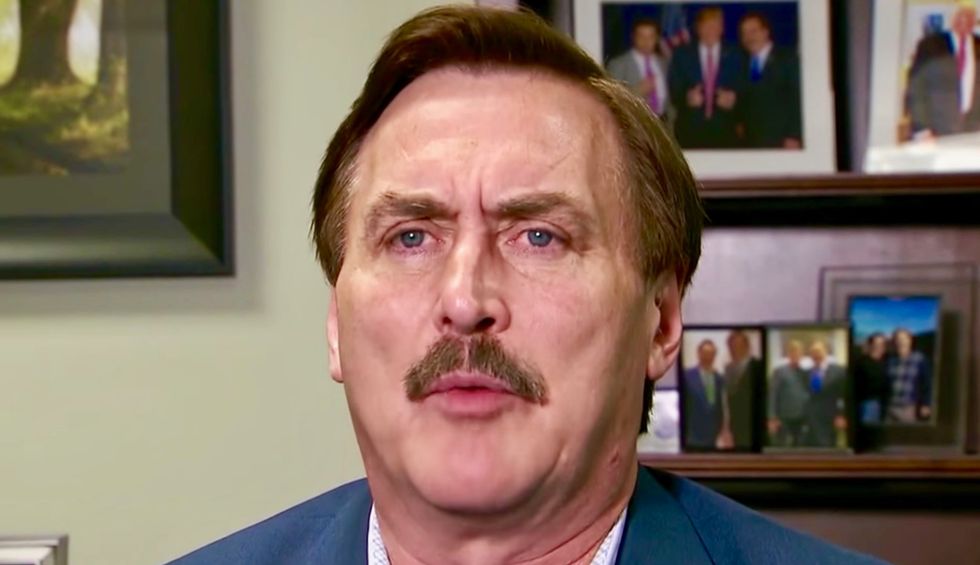 Mike Lindell of My Pillow/Screenshot

MyPillow CEO Mike Lindell, a longtime supporter of President Donald Trump and one of the few businessmen still willing to advertise his company on Fox News, made a surprise appearance at Trump's coronavirus press briefing on Monday to announce his factory would be manufacturing masks — which will reportedly be cotton face masks rather than medical-grade N95 masks. During that press conference, he invoked God to praise Trump and urged people to turn to the Bible.

But it is unclear how much faith can be put in this effort. According to Right Wing Watch, Lindell — whose company has faced lawsuits for deceptive marketing and unsupported medical claims — has recently linked himself to the QAnon conspiracy theory.

A number of believers in QAnon — which posits that Trump is on the brink of declaring martial law and arresting Democratic leaders for their purported role in a demonic, world-spanning child sex trafficking ring — noticed that the website for MyPillow was accepting "Q" as a promo code and viewed it as a sign.

It is almost certainly a coincidence — other letters including "K" and "W" were also accepted as promo codes — but Lindell proceeded to retweet the conspiracy theories on his own Twitter account.

Lindell has also gone on record saying he believes the devil is trying to bring down his website.

On a radio show Tuesday hosted by evangelical hate group leader Tony Perkins, he said that "My website, we've never had this happen. It keeps breaking, things keep happening, and it's just — I just think it's the devil. I mean, it's evil attacking MyPillow because it knows we're winning ... We're winning. We're bringing God back to the country."