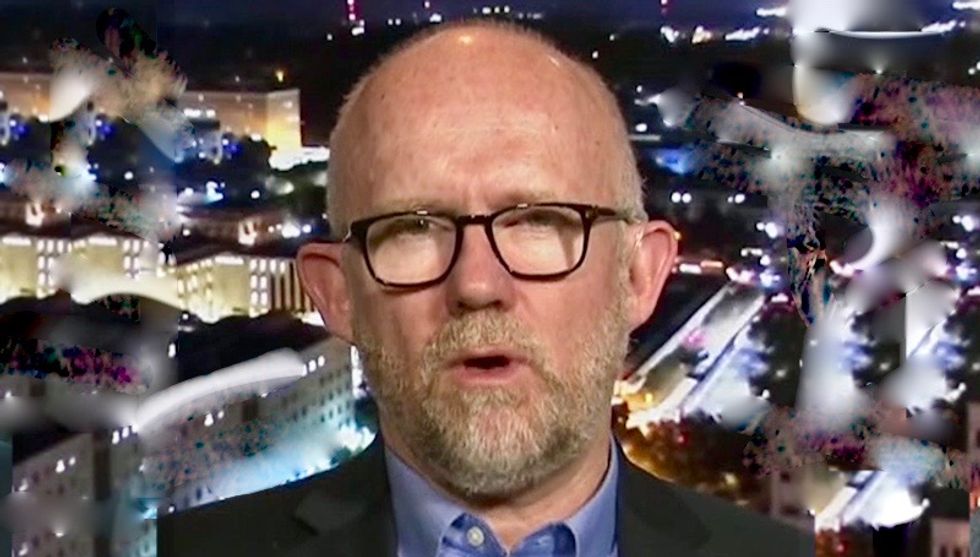 Hours after Donald Trump stunned medical professionals -- as well as television viewers -- by suggesting that coronavirus patients could somehow be treated with household disinfectants, conservative campaign consultant Rick Wilson raked the president over the coals for the suggestion that he succinctly called "insane."

In a column for the Daily Beast, Wilson called out the craziness of the president's off-the-cuff suggestion and noted that somehow, someway, the president's biggest fans will attempt to defend his dangerous proposal.

Using Trump's own words (“So supposing we hit the body with a tremendous — whether it’s ultraviolet or just a very powerful light. And then I said supposing you brought the light inside the body, which you can do either through the skin or some other way and I think you said you’re going to test that too,” and "I see the disinfectant that knocks it out in a minute, one minute. And is there a way we can do something like that by injection inside or almost a cleaning? As you see it gets in the lungs, it does a tremendous number on the lungs, so it would be interesting to check that,”) as a jumping-off point, Wilson dryly suggested, "Interesting. Injecting disinfectant. What could possibly go wrong?"

"Just as Trump’s huckster sales job of hydroxychloroquine led to his fans drinking a similarly labeled fish-tank cleaner with fatal results, somewhere in Trump’s America tonight, someone is thinking about an off-label use of a household disinfectant because they believe Donald Trismegistus is smarter than those heretic scientists. To them, Trump has given over the secrets of the philosophic mercury in the form of bleach or Lysol," he wrote. "His tireless, shameless defenders will race to their Twitter feeds and the pages of the Trump-suck blogs like The Federalist to tirelessly, shamelessly defend him, and cite unseen the some emerging study Trump pointed to insist that sunlight and cleaning products will degrade this invisible enemy."

Wilson suggested Trump is scrambling to propose a new "miracle" cure now that his hopes for hydroxychloroquine has fallen apart.

"When he started praising hydroxychloroquine, of course his media lackeys defended it, praising Dr. T’s Miracle Elixir as a nearly magical remedy for the virus. Now that it’s been demonstrated in multiple studies to pose meaningful dangers to those who take it in combination with azithromycin, and to have little effect on the symptoms and no power to cure this new virus, you’ll note that the loud screeching on Fox and the Trump media has become a swift and deafening silence. I for one am super-excited to read A Defense of Trumpian Alchemy on the pages of The Claremont Review," Wilson explained. "Thursday was, even by Trump’s ridiculous standards, a rant for the ages. His now-tiresome pattern of saying and doing absurd things during these daily campaign events dressed up as briefings and making absurd promises he never intends to keep is one of the most corrosive elements of his handling of the coronavirus crisis. His lies and bad counsel have cost many thousands of lives and will cost thousands more before this is over."

"Trump is a masterful con man, he's always trying to squeeze a little more juice out of his marks. When promises that the coronavirus will soon disappear failed, he switched to promising miracles from hydroxychloroquine. When his claptrap cures don’t emerge, then blame is always an option," he added before pointing out the president has now created the risk that, when a real vaccine is created, his biggest supporters won't believe it.

"Because conspiracy theories have now met, mated, and had a baby, the merger of Trump cultist nationalist populism and anti-vax batshittery means that even if we develop a vaccine to prevent the further spread of this disease, a meaningful fraction of Americans will refuse to accept it, and won’t get their kids vaccinated," he lamented.

"Never forget that the man spouting a stream of absurd bullshit like a medieval alchemist with mercury poisoning is the President of the United F*cking States," he wrote before warning, "The man who stood there today ranting about disinfectants and ultraviolet light cures also has control of America’s entire nuclear arsenal. Sleep tight!"