Trump's COVID-19 'bleach gambit' may have been the moment his supporters realized he's dumber than they thought: columnist 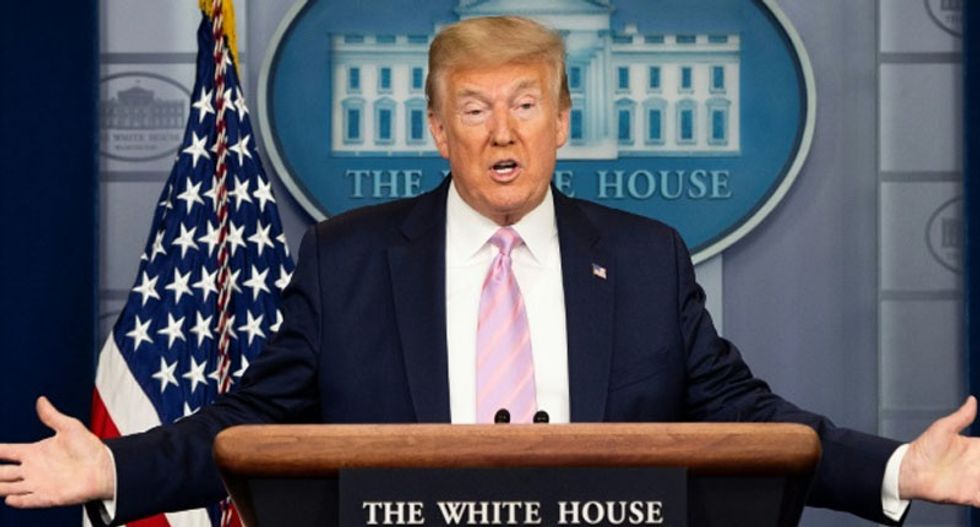 In a column for the Daily Beast, longtime political observer Margaret Carlson speculated that Donald Trump's comments about using bleach and disinfectants internally to cure coronavirus victims may have been the tipping point that makes some of his followers abandon him.

On Thursday, the president suggested that toxic disinfectants thatcan be used to disinfect surfaces might have some application to curing those afflicted by the COVID-19 virus. Those comments set off a firestorm among health officials and led to warnings from manufacturers to not listen to the president. Even after the president defended his comments, saying he was being "sarcastic" in a response to a reporter's question -- which CNN's Anderson Cooper called a blatant lie -- Carlson stated the damage may already be done to the president's re-election hopes.

"This week the president went from peddling deadly hydroxychloroquine as a game changer to promoting the idea of bleach taken internally as a cure. It will also kill you, but more quickly," Carlson wrote. " The next day, Trump tells us he was being sarcastic, as his worst remarks, like roughing up protesters, loving Wikileaks, wanting to stay in office for 10 years, all are when challenged. For those who don’t process irony, Lysol issued an immediate warning not to ingest its product—in case the skull and crossbones on the container isn’t enough."

Noting, "In rushing to end restrictions, Trump’s repeating the mistakes he made during the lost weeks of winter when, stuck in a protective crouch, he cost the country lives," the columnist pointed out that the president's main concern is not the health of Americans -- but is part of a race

"... to open businesses, essential and not, by May 1, in hopes of resurrecting the Dow (buy on the dip!), lowering unemployment, raising his poll numbers, and throwing open the doors to his shuttered hotel down Pennsylvania Avenue—the one his sons are hoping the federal government will give a break."

That, she said, may blow up in his face.

"Expertise is worthless, especially if it clashes with revenge in this White House, as we learned this week from reporting that revealed Trump’s first director of the pandemic task force had no relevant experience whatsoever. He was a breeder of Labradoodles," she wrote. "The bleach gambit may be the moment when the president’s followers finally realize they’re smarter and mentally healthier than he is. The country has devolved into two camps. On one side are stir crazy people with chapped hands and a few extra pounds; they’re drinking at all hours, and they’re fuzzy on what time it is."

"Still by more than 80 percent, they agree with experts that the better path is to stay home for now. They’re deeply worried about the economy but also believe that to bring back 26 million lost jobs, the virus must first be contained," she added before warning, "The other group is taking its cues from the president, who feels it’s high time to get our beautiful economy, the likes of which no one has ever seen before, back on track."