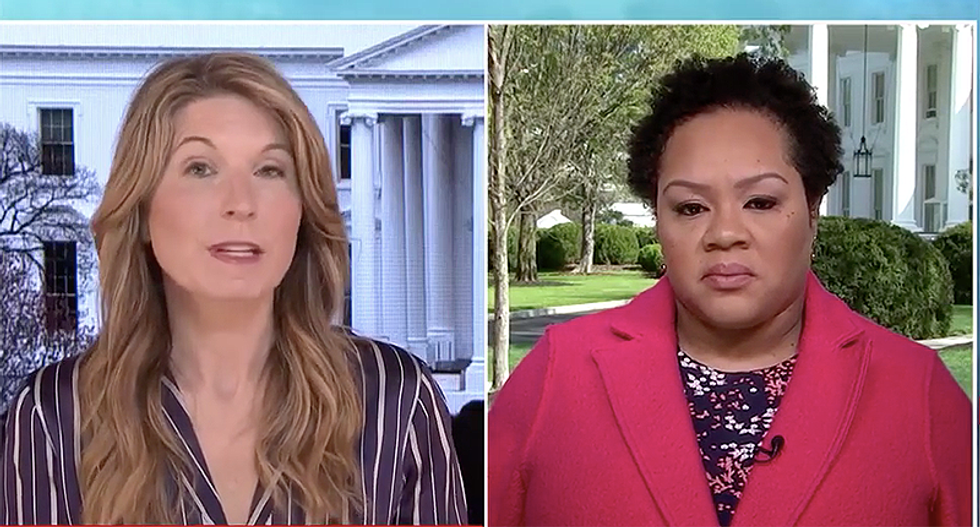 During an MSNBC panel discussion, President Donald Trump's latest reporter-foe, Yamiche Alcindor of PBS, explained that it's clear he's backtracking after he downplayed the coronavirus crisis.

The president's greatest foe in the press room was once CNN's Jim Acosta, but as the PBS reporter quotes Trump's own words back to him, he's twice singled her out, calling her question "nasty" and referring to her and a fellow African American reporter "you people."

MSNBC host Nicolle Wallace said that referring back to Trump's words downplaying the crisis have become his latest emotional triggers.

"I think the president in some ways is having to backtrack on some of the misleading information that was put out there," Alcindor said.

Trump has lately decided to blame healthcare workers for the coronavirus crisis, alleging that they are somehow selling masks and ventilators "out the back door." Or questioning their need for protective equipment.

"Dr. Wen made a great point, which is that we can't build new doctors and nurses and health care professionals," continued Alcindor. "But what the president was doing was openly questioning whether or not what they said they needed they actually needed. That goes for a tweet today where you point out, Nicolle, that he's talking about insatiable appetites and some are complainers when the people we're hearing from are emergency room doctors, nurses."

Trump is likely getting this information from son-in-law Jared Kushner, who said in one meeting that he knows better about what hospitals need than the doctors on the ground do because he's doing the math from his White House office, Vanity Fair reported.

“I have all this data about ICU capacity. I’m doing my own projections, and I’ve gotten a lot smarter about this. New York doesn’t need all the ventilators," Kushner said, according to a person present at the meeting.

"The president has to deal with the fact that very early on he was saying this was like the flu and then yesterday and a few days ago decided to say, 'it's worse than the flu, it's vicious,'" Alcindor recalled. "I think what the president is really dealing with is the fact that he was trying to downplay this virus and hope for the best and he said he was trying to be positive in his description. But at the end of the day he downplayed the worst health care and economic crisis Americans have faced and he has to deal with that every day as he tries to now get people to really believe that he's telling them the truth this time around."