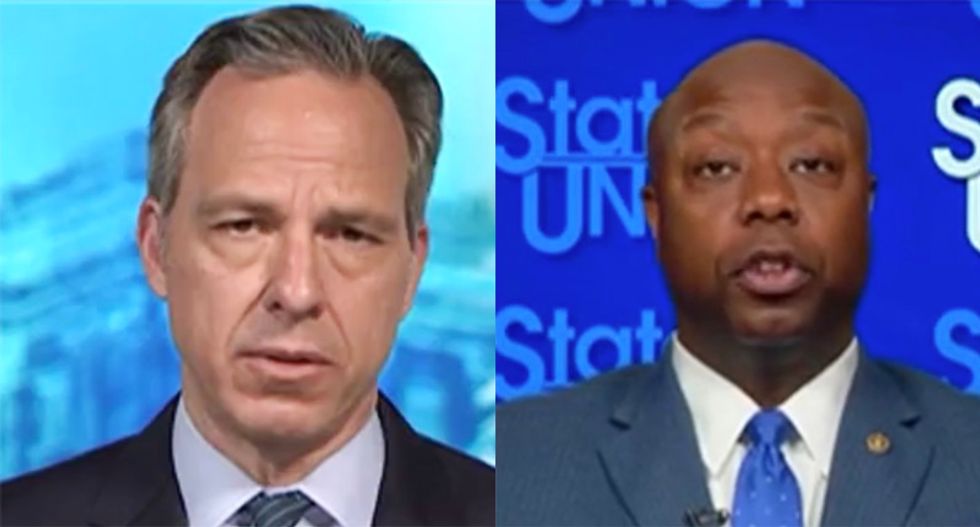 Sen. Tim Scott (R-SC) wanted nothing to do with addressing a video promoted by Donald Trump showing a fan shouting "white power" when he sat down with CNN's Jake Tapper on Sunday morning.

As he had done earlier with HHS Secretary Alex Azar, the "State of the Union" host started his interview asking about the president's tweet -- putting the Republican lawmaker --who is also the GOP's only Black senator -- on the spot.

"President Trump just retweeted a video this morning featuring one of his apparent supporters shouting white power, take a listen," Tapper began before playing a portion of the viral video. "What is your reaction to the president retweeting that?"

"Well, there is no question he should not have retweeted it and just take it down," the GOP lawmaker tersely replied.

"Does it offend you, though? It offends me and I'm white, " Tapper pressed.

"Well, listen, if you watch the entire video, and you can't play it because it was profanity laced, the entire thing was offensive, there is no question. We can play politics with it or we can't, I'm not going to," Scott shot back before adding, "It is indefensible we should take it down, that's what I think."

He then grew silent leading to an awkward pause between himself and the host.