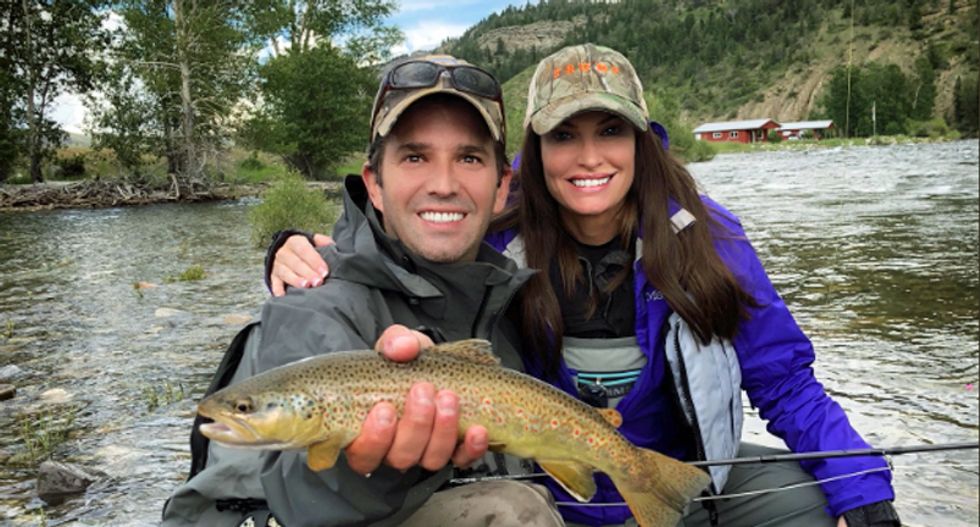 According to the Washington Post, the report that top Donald Trump 2020 campaign official, and girlfriend to Don Trump Jr., Kimberly Guilfoyle has tested positive for COVID-19 is not only a setback for the president's troubled campaign but also a stark reminder that the coronavirus is still spreading rapidly despite the president's denials.

Just prior to the presidential rally at the foot of Mt. Rushmore, it was reported that Guilfoyle, the top fundraising official in the Trump campaign, tested positive for COVID-19 which caused her to miss the president's speech before a packed crowd where few wore masks for self-protection.

As the Post notes, the news of her infection cast a pall over the president's speech and reminded the public that the coronavirus pandemic is still raging even through the president refused to mention it during his speech.

According to the report, "Trump’s efforts to rejuvenate his struggling reelection campaign with events in front of large crowds outside Washington was set back for a second time after Kimberly Guilfoyle, a Trump campaign fundraiser who is dating his son Donald Trump Jr., tested positive for covid-19, the disease caused by the coronavirus, ahead of the president’s arrival in South Dakota."

Noting that Guilfoyle was absent this weekend, the report continued by noting Trump's last rally in Tulsa was also marred by reports of infections.

With the president banking on an improving economy to salvage his re-election, as of late he has been dismissive of the fact that the pandemic is roaring back in some states and avoiding discussing it unless pressed -- only to state that he thinks it will soon disappear, with the Post reporting, "Trump has sought to minimize the threat from the pandemic as he pushes for much of the nation to reopen businesses, touting this week a better-than-expected jobs report from mid-June."