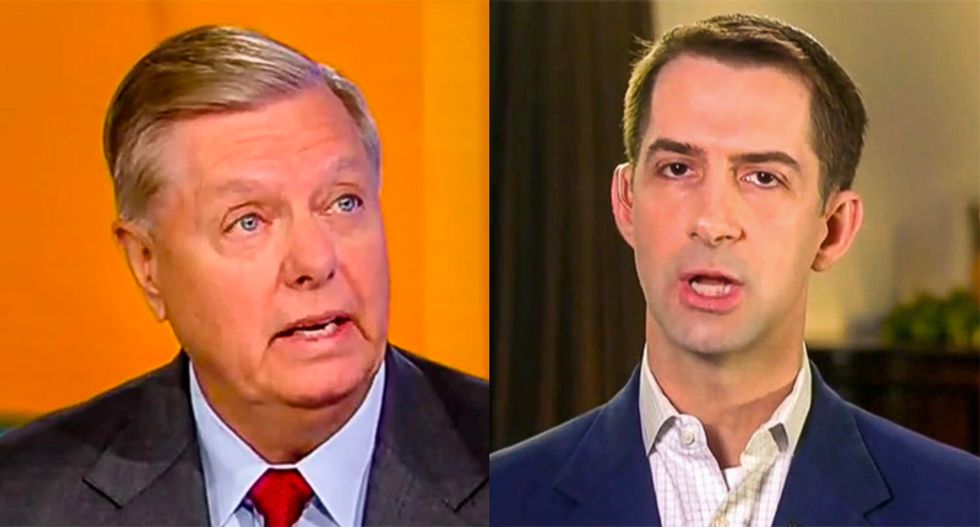 In an interview with the Washington Post's Greg Sargent, one of the founders of the Never-Trumper Lincoln Project said he is personally seeking "atonement" for some of the Republicans he once helped into office, and that the group is making plans to eliminate all traces of Trumpism once the president is gone.

Lumped in with those "traces" are the GOP lawmakers who have enabled the president.

According to John Weaver -- who admitted that he helped get former GOP Senator Jeff sessions elected -- the group has no plans to disband should Trump go down to defeat in November.

With Sargent writing, "The Lincoln Project’s declared mission is 'defeating Trump and Trumpism at the ballot box.' That includes a pledge to elect Democrats over Republicans who, like Trump, do not 'support the Constitution,' he went on to point out that the group has been notable for the inclusion of Kellyanne Conway's husband George, and longtime GOP strategist Rick Wilson known for his hard-hitting attacks on Democrats.

Asked whether "the Lincoln Project is breaking permanently with the GOP embrace of voter suppression, gerrymandering and other anti-democratic tactics," Weaver said absolutely, adding they are commited to ensuring the “drive-by Jim Crowism in many parts of the country is put to an end.”

Asked about his work for Sessions, Weaver replied, "I have my own atonement to do every day about that. Did I contribute to putting a brick in the road to where we are today? Yeah, I did.”

The political strategist pointed out that the group plans to release get-out-the-vote ads to go with the blunt-talking ads they have already aimed at Trump and GOP senators like Lindsey Graham (SC) and Susan Collins of Maine.

Which brought up what the group plans to do after the election.

Pressed whether the Lincoln Project will run “ads attacking President Biden for raising taxes on oil companies in early 2021," Weaver said 'no.'

“We’re not gonna do that,” he explained. "“He [Biden] will have a mandate to clean up the mess that Trump has created with the help of his enablers. That shouldn’t be held up. We intend to do all we can to make sure that doesn’t happen.”

"Indeed, in Weaver’s telling, binding the 'wounds' of Trump, as the group’s mission puts it, includes working against Republicans who try to prevent Biden from addressing our deep crises, particularly among Trumpist Republicans such as Sen. Tom Cotton (R-Ark.) who use this to position themselves for 2024," Sargent wrote, adding that Weaver told him, "

“We will not stand on the sidelines if an attempt to bind the wounds is held up. We plan on participating in that debate.”