State Department claimed it was ‘necessary to national security’ for Pompeo’s wife to go on a junket: report 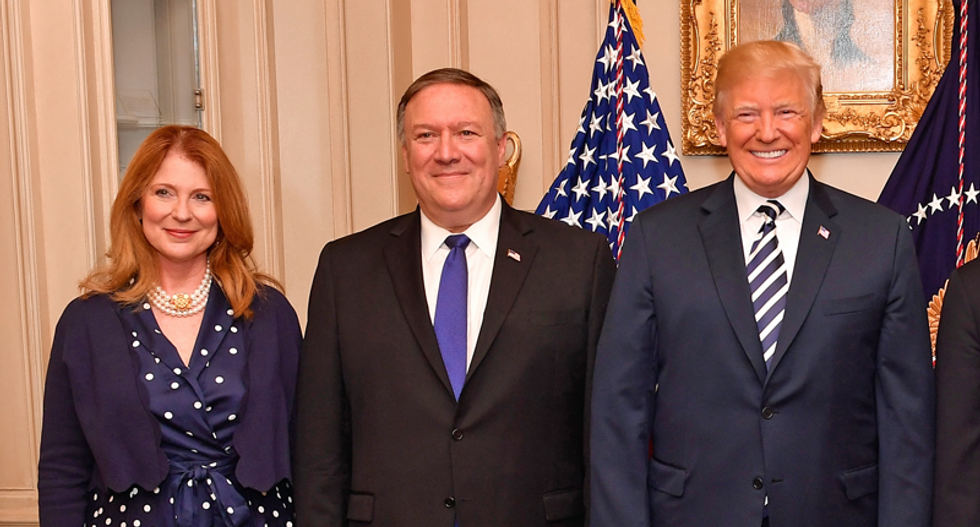 The wife of the Secretary of State is once again embroiled in an ethics scandal.

"As Secretary of State Mike Pompeo prepared to tour the Middle East last year, senior State Department officials debated whether they could legally justify his wife Susan’s desire to travel with him," Politico reported Thursday. "Susan Pompeo had been invited to events in two capitals, Cairo and Abu Dhabi, by foreign officials. But circumstances had grown complicated: a U.S. government shutdown meant the State Department had to be exceptionally careful with spending, and her presence would incur some costs to taxpayers."

"The discussions resulted in a memo, obtained this week by POLITICO, in which some senior State Department officials argued Susan Pompeo’s travel was in the 'foreign policy interests of the United States' and 'necessary to national security,' while diplomats who deal with Middle East policy disagreed," Politico explained.

The memo was labeled as “sensitive but unclassified."

"The memo sheds new light on the unusual, and controversial, role Susan Pompeo has played at the State Department since her husband took over as America’s chief diplomat in April 2018," Politico noted. "Some former top department officials who reviewed the memo at POLITICO’s request were most struck by the carefully calibrated sentences from the Middle East bureau. They said it indicated clear divisions about whether Susan Pompeo should go on the trip but a hesitation to turn the issue into an all-out internal battle."

In 2019, the Pompeos were caught in a scandal over reportedly using Secret Service agents as "UberEats with guns" for running errands for the couple. That resulted in an investigation by the State Department Inspector General, who Trump then fired.