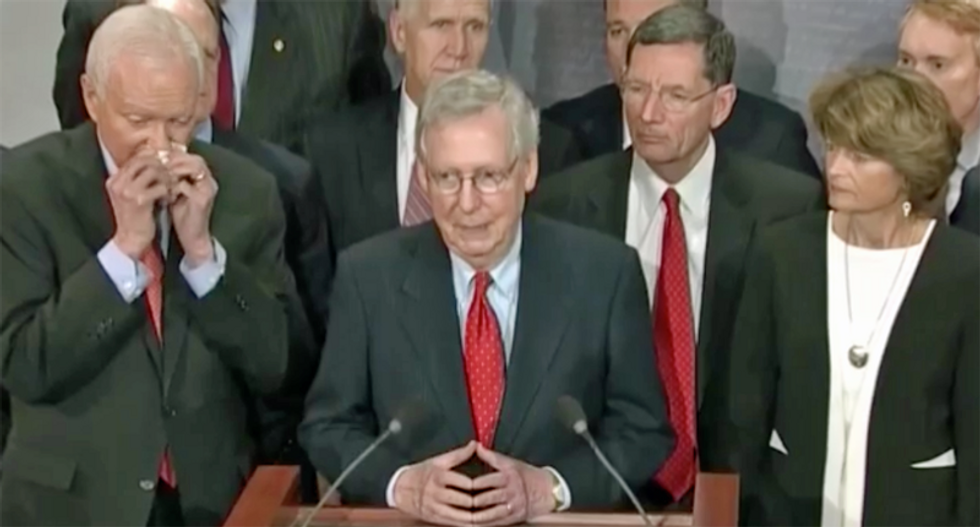 Conservative Washington Post columnist Jennifer Rubin attacked the Republican Party for being the party that welcomes "bigots and wackos" in her Thursday column.

This month, the GOP has earned two new candidates among their ranks that are avid supporters in the "satanic cannibalism" conspiracy theorists group QAnon.

"It is a favorite game in politics to take the most extreme member of the other party and then paint the entire party as extreme," wrote Rubin. "However, when many candidates and officials plus the head of the party evidence nuttiness, it is fair to label the party as such."

While the left has self-described Democratic Socialists among the ranks, none of them have claimed that 9/11 never happened or that the Sandy Hook shooting was fake and "performed" by child "crisis actors." That's what Laura Loomer (R-FL) and Marjorie Taylor Greene (R-GA) have claimed.

When reporters asked President Donald Trump about it on Wednesday, he disagreed that the group was a "bad thing" because not only do they like him, but the conspiracy theorists "love their country."

Even Trump's biggest fans were appalled by Trump's embrace of the group.

Even former GOP presidential candidate and Florida Gov. Jeb Bush said, "nut jobs, racists [and] haters have no place in either Party."

"Perhaps he confused the GOP with a mainstream party," remarked Rubin.

She also brought up leaders like appointed Sen. Kelly Loeffler (R-GA), who "praised a racism-spewing, far-right figure and a far-right media outlet that peddles conspiracy theories."

It may seem shocking to see such candidates infiltrate the GOP, but then again, there are those with similar beliefs serving in the House Intelligence and Judiciary Committees that have echoed conspiracies about Russia. Rep. Devin Nunes (R-CA) even helped spread a conspiracy about Ukraine being the one behind the DNC hack but was also somehow trying to get Hillary Clinton elected. The attempt to validate the theory resulted in Trump being one of very few presidents impeached by Congress.

It's not rational behavior, much less the opinions of a mainstream party. Rubin explained that the GOP has turned to take cues from "a deeply disturbed and easily bamboozled president who will adapt any theory or embrace any person who likes him." He particularly embraces leaders like Vladimir Putin or Kim Jong Un for acting as if they like him.

"Republicans often turn a blind eye toward Trump's racist and misogynistic outbursts," Rubin closed, recalling all the Republicans who like to claim they never saw the tweet reporters ask them about. "Those who do know better go along with the craziness hoping to be rewarded in the post-Trump GOP. In the meantime, the party has devolved into a cesspool of bigotry and mind-numbing conspiracies, with a large dollop of science denial. When a party wants to honor at its convention the couple who waved weapons at peaceful Black Lives Matter protesters, you have to conclude that it's not only lost touch with Americans but also with decency and reality."