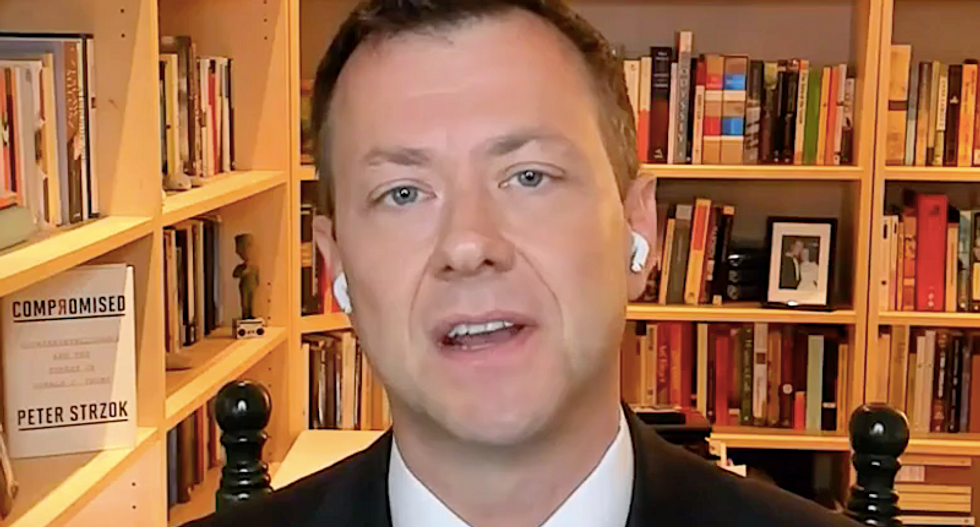 Former FBI agent Peter Strzok sounded the alarm about the recent revelations in the New York Times exposé on President Donald Trump's taxes. According to him, there should be a counterintelligence investigation into Trump's finances and how they coincide with foreign policies that make no sense for the United States.

Speaking with former FBI deputy Frank Figliuzzi and MSNBC host Nicolle Wallace, Strzok called the Times report a "roadmap" for the ways in which Trump could be compromised by hostile powers. It could also explain Trump's issues he has with the intelligence community, who would know about any deals he may have made.

"Part of the concern of any counterintelligence professional is looking for these hidden financial entanglements," the Trump foe explained. "And watching and having done that over six different administrations, every foreign country is trying to use money to get leverage and influence on any given presidency. What the information in The New York Times reports out of those tax records, the breadth and volume of that monetary back and forth is stunning. It's simply unprecedented [of] in any president in modern history. So, if you look at the ways that can be used to, as leverage over Trump, you have to think of this first and foremost as a national security issue. yes, this is a financial issue, but first and foremost, the ways that it can be used to impact the national security of the United States, by the way, can be used against Trump is unprecedented and is deeply concerning."

When it comes to links between Trump and Russia and the investigation that Strzok worked on, this seems different than the financial concerns of the Trump Organization.

"What we're seeing, what I understand that the New York Times saw were overt records," explained Strzok. These are things used in accounting and in filings with the IRS. What this isn't is anything that's hidden or, you know, intended to remain off the books. And, of course, that's the environment where most foreign intelligence services, certainly sophisticated ones, are going to try to operate. So, I wouldn't expect to see necessarily, without getting into any sort of classified detail or investigative detail, I think it is reasonable to assume that many countries are well capable of placing money into Trump or his interests around him in a way that doesn't show up on the books, that isn't going to show up on filing with the IRS. So, the absence of that information doesn't surprise me, but that is very much something I would expect to see had that counterintelligence investigation taken place."

Wallace mentioned a few bizarre international things that simply don't make sense. For example, she cited Trump's response to the slaughter and dismemberment of Washington Post reporter Jamal Khashoggi. Trump toed the line coming from the Saudi Crown Prince. In John Bolton's book, he alleges that Trump was so concerned about Turkey that he called Attorney General Bill Barr and the same has happened with China. Wallace wondered if Trump has some kind of "side hustle" going on.

"I do," Strzok said flatly. "I think largely, many of these decisions are driven by personal business interests. And the most important thing is, they're being driven in a way that's hidden. And because they're hidden from the American people, that is precisely what gives these foreign nations leverage over them. So, again, that New York Times data, it talks not just about Russia, it talks about Turkey, about the Philippines it talks about Azerbaijan and Dubai. And the concerning thing is until yesterday, none of those transactions were known. So, each and every one of those hidden transactions, those hidden payments provide a leverage point for the foreign nations to use over the president and really go a long way to explaining, as you said, some of these just absolutely nonsensical decisions that don't have any benefit to U.S. national security."