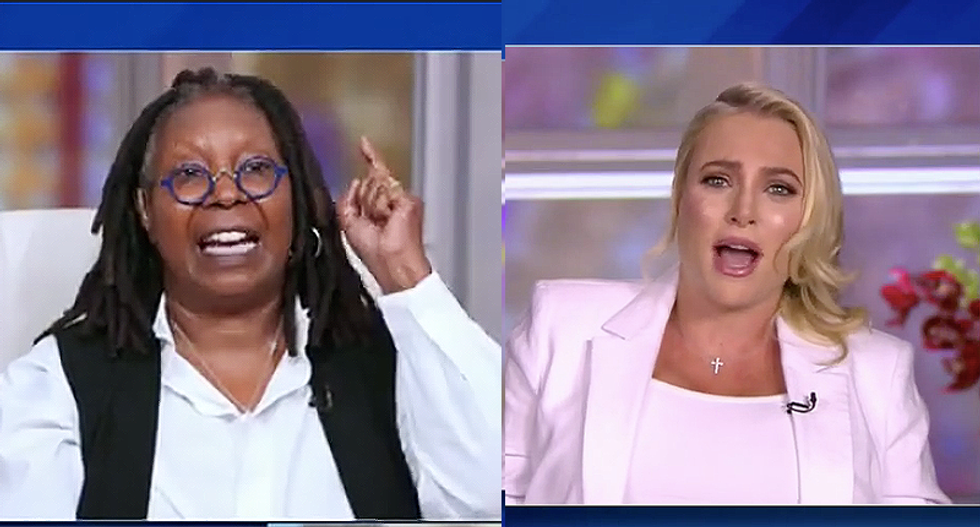 Meghan McCain used Fox News talking points during Thursday's episode of "The View," to claim that Democrats and the media were just as much to blame as President Donald Trump for lying to Americans about COVID-19.

The show's first topic was about the recent tapes released by veteran reporter Bob Woodward for his upcoming book Rage, in which Trump says he intentionally downplayed the danger of the coronavirus to reduce panic.

Trump was the only leader to receive Homeland Security briefings and extensive updates from the CDC and COVID Task Force about the virus. But McCain attacked House Speaker Nancy Pelosi for encouraging people to go to Chinatown. Pelosi's comments came after Trump was blaming the Chinese for the virus and Asian Americans started being the target of violence and attacks.

"But going to the initial point of this Bob Woodward interview, I cannot tell you the levels of insanity and stupidity you have to be in politics to give 18 hours to any journalist on the record, period," McCain also said. "If Bob Woodward said, what did you have for breakfast? I would say, off the record, Bob, no comment. I would say, what does he want, and what kind of angle does he have? This is almost famous all the time. They are the enemy and they are here to make you look bad, and the idea they are --"

"They're not the enemy," said Joy Behar.

"What do you think is going to happen?" McCain responded. "For a Republican the media is!"

It was reminiscent of a phrase Stephen Colbert often used when playing a fake conservative on Comedy Central. "Reality has a well-known liberal bias."

McCain went on to say that Dr. Anthony Fauci didn't say anything that was "distorting" the facts of the coronavirus. The concern was downplaying the severity and misleading Americans that it was "just the flu." Trump also knew that the virus was hurting younger people more than originally thought. At the same time, Trump was outright lying to Americans that masks wouldn't matter and young people couldn't get the virus.

Behar said that the only thing people have to do is listen to the tapes and think about it.

Whoopi Goldberg fact-checked McCain, saying that it was clear people could have been saved if Trump had been honest about this information.

"I just wanted to say, one of the initial things you understand immediately is when you hear him say, 'Yeah, it's this, and it's that,' you think, but if you knew that, there would have been no confusion as to whether we should be wearing masks," said Goldberg. "There would be no confusion about what we should be doing because when someone says, 'Hey, there's something and it's worse than the flu and we need to get on top of it because we want to get it right.' We want to take care of it. That's what you do when you are a leader. What we've gone through these last several months of hell is because the person at the top didn't say, 'I got this. Here's the direction we need to go in.' That's what we have been lacking, and that's why we're in the situation we're in now. I just keep waiting for Godzilla to come out of the East River."

The debate continued after the break when Sara Haines tried to blame Bob Woodward for not telling Americans about what Trump was saying privately. Sunny Hostin was shocked, that people are more upset with Woodward than the president for being a maniac.