White House knew Giuliani source was Kremlin agent -- but that might have made him more attractive: 'That's how toxic things are' 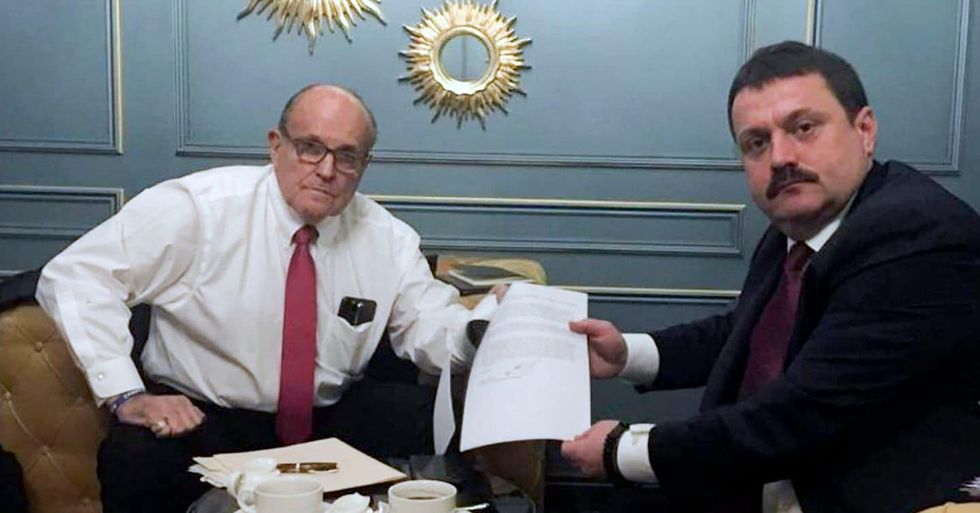 Rudy Giuliani's source in an attempt to smear Joe Biden has been flagged for more than a year by U.S. intelligence as a conduit for Russian efforts to interfere with the 2020 election.

Ukrainian parliamentarian Andriy Derkach was sanctioned last week by the Treasury Department for attempting to meddle in the U.S. election on behalf of the Kremlin, and that has caused problems for Giuliani and Sen. Ron Johnson (R-WI), who is leading a probe of Biden's activity in Ukraine, reported The Daily Beast.

“Johnson is just a contrarian in nature," said one Republican close to the administration. "If you come to him and say that the Ukraine stuff seems fishy, he will very likely just tell you it’s his investigation and to get lost."

It's not clear whether Johnson received any intelligence briefings or other warnings specifically about Derkach, but a source familiar with the GOP probe told The Daily Beast that Democrats didn't hear about concerns over the Ukrainian politician until late 2019.

“We did not accept any information from Mr. Derkach whatsoever,” Johnson said Wednesday during a contentious Senate debate. “I don’t know who Derkach is … Yet Democrats persist in pushing this false allegation. As a matter of fact, I’m not sure our committee has alleged anything yet.”

Senate Minority Leader Chuck Schumer (D-NY) introduced a resolution “calling for an end to the use of congressional resources to launder Russian disinformation through Congress,” saying Johnson's allegations against Biden suspiciously resemble claims promoted by Derkach, who is believed to have links to Russian intelligence.

“Members of the Senate have been presented with specific warnings about these Kremlin-backed conspiracies and lies, again and again, including in classified settings," said Sen. Ron Wyden (D-OR), who serves with Johnson on the Senate Intelligence Committee.

Senior levels of the Trump administration heard concerns about Derkach by early spring 2019, when pro-Russia Ukrainians linked to Giuliani worked to drive then-U.S. ambassador Marie Yovanovitch from Kyiv, and those efforts were traced back to Derkach.

“I was aware by the end of that conversation that he was more than a Ukrainian parliamentarian,” a senior administration official told The Daily Beast.

A U.S. intelligence official made clear that Derkach was a Russian intelligence asset, although another official says it was "somewhat unclear" what his exact relationship was to the Kremlin.

At least two intelligence reports circulated within the administration in April 2019 about suspected foreign election interference, and Derkach was one of five individuals named in those warnings.

The president got himself impeached later that year after asking his Ukrainian counterpart to announce an investigation of Biden apparently based on Derkach's claims, but Johnson and Giuliani continued looking into those allegations.

Giuliani and Derkach appeared together on the pro-Trump One America News Network late last year to push their debunked corruption allegations against Biden, and the president's attorney used portions of that segment on his podcast in March.

Then-Senate Intelligence Committee chairman Richard Burr (R-NC) warned Johnson about Derkach in December 2019, and even if Giuliani had been told about his ties to the Kremlin -- that might have only made the president's attorney more eager to work with him.

“The nature of the Trump inner circle — whether that’s the president himself, people in or out of the administration, on Capitol Hill, or Rudy Giuliani — is that because of their views towards the intelligence community, if you come to them and say this guy might be an asset of so and so, it just makes it more likely that they double down on the relationship," said the Republican close to the administration. "That’s how toxic things are now."