'Perfect metaphor for his presidency': Trump shamed for leaving elderly MAGA fans to freeze in Omaha 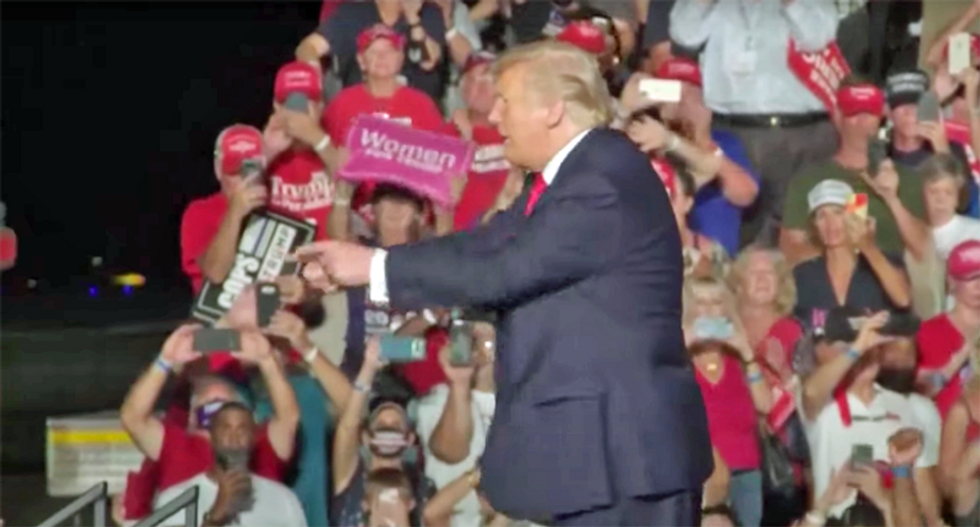 Thousands of President Donald Trump's supporters were stranded after his Omaha rally, where temperatures dropped to near freezing.

The president rallied Tuesday night in hopes of grabbing an extra vote in the Electoral College, thanks to Nebraska's split allocation, but many supporters waited outside in the cold for buses that were blocked from an access road by outgoing traffic.

At least seven supporters were hospitalized and 30 were treated at the event for exposure to cold, seizures and other ailments.

Social media users were struck by the metaphor of Trump leaving his supporters to possibly suffer hypothermia for a chance to hear him complain amidst a surging coronavirus pandemic.

“In theory, I didn’t really have to be here,” Trump told the crowd, “but it’s nice to be with friends.”

Trump bussed them in, left them there as he left. Full blown medical emergency response. Its below freezing out t… https://t.co/VVbt0PoFwZ
— Stefanie Manack (@Stefanie Manack)1603863087.0

On Omaha, I've been literally to thousands of events over 5 Presidential campaigns and no competent or compassionat… https://t.co/nZmFH48wwJ
— Joe Lockhart (@Joe Lockhart)1603884940.0

Trump leaving supporters out in the cold is the perfect metaphor for his presidency https://t.co/vCmwW1Ts77
— Ron Fournier (@Ron Fournier)1603880902.0

When someone finally makes a film about the fiasco that was Trump’s presidency, the final shot should just be a gro… https://t.co/JAEaZZdlZz
— Scott Charles (@Scott Charles)1603882208.0

Trump fans should take heed after being abandoned in the cold after the Omaha rally It’ll be the same if they vote… https://t.co/kWVYDhHfDa
— Stu Cameron (@Stu Cameron)1603871958.0

@kayleighmcenany @realDonaldTrump Covid wave. How fun!! Not as much fun as getting abandoned and stuck for hours i… https://t.co/pB3Hsw3ebS
— Kimball Mullins (@Kimball Mullins)1603868825.0

Trump is in his hotel in Las Vegas, coked-out of his mind at 5:30am in the morning the day after ‘Fyre Festival: Om… https://t.co/QZBJPDVFWn
— NoelCaslerComedy (@NoelCaslerComedy)1603888437.0