'Today feels like the election’s over': Republicans giving up hope as Trump's illness derails campaign 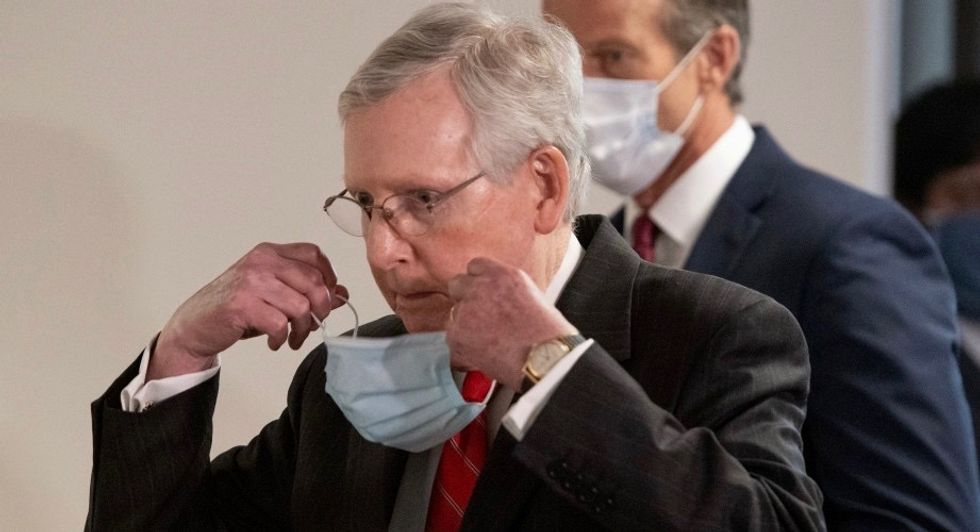 According to a report from Politico, Republicans are looking at the events of the past week and see little hope that Donald Trump's campaign can get back on track with the president in the hospital suffering from COVID-19 and that his illness is also imperiling the confirmation of Supreme Court nominee Amy Coney Barrett.

As Politico's Ryan Lizzo and Daniel Lippman wrote, Republicans had long feared Trump would hurt the party and now those fears are being realized with an election less than 30 days away and control of the Senate on the line.

According to the report, "That an actual virus has now infected Trump, his wife, his campaign manager, the head of the RNC, several advisers, and three senators — many of them at a celebration of Barrett’s nomination — thus throwing all three of the GOP’s 2020 goals into chaos, is a plot twist that would be rejected by any writer as just a little too on the nose," with the report saying some conservatives believing the president might find a way to turn his bout with COVID-19 into a plus and generate some some sympathy.

“This is a chance for him, quite frankly, to talk about the human side of this: ‘This is tough, this is hard, we’re gonna get through it,’” explained Sen. Lindsey Graham (R-SC) who has his own re-election problems. “If he comes out of this thing a little bit humbled and focused on speeding up vaccines and trying to safely reopen the country, then I think he’ll probably be okay.”

Not all Republicans are sure about that, with one former senior White House official saying that Trump's travails may doom the nomination of Barrett to the Supreme Court.

“Trump has done more to derail the Barrett nomination than any Democrat. They are screwing themselves, that’s for sure,” they explained.

According to one GOP strategist, Republicans are under extreme duress with the election quickly arriving and their hold on the government slipping due to the coronavirus pandemic that was mishandled by the Trump administration.

Today feels like the election’s over,” the strategist, who requested anonymity, lamented. "The polls have dropped all last week everywhere, it just feels like the end is near. And I don’t know what they can do to rehabilitate it until he gets better. There’s too many seniors who think he’s been irresponsible and this all started when he politicized the coronavirus. It started back in April and May, but it’s really peaking now.”

One Republican official suggested another shoe could drop that would seal the fate of the party.

“If the White House lied about the timeline and he went to events and was around people knowing he was covid-positive,” he told Politico. “I think that is the single biggest thing that would resonate with regular people in terms of how irresponsible he was — if he put other people in danger.”