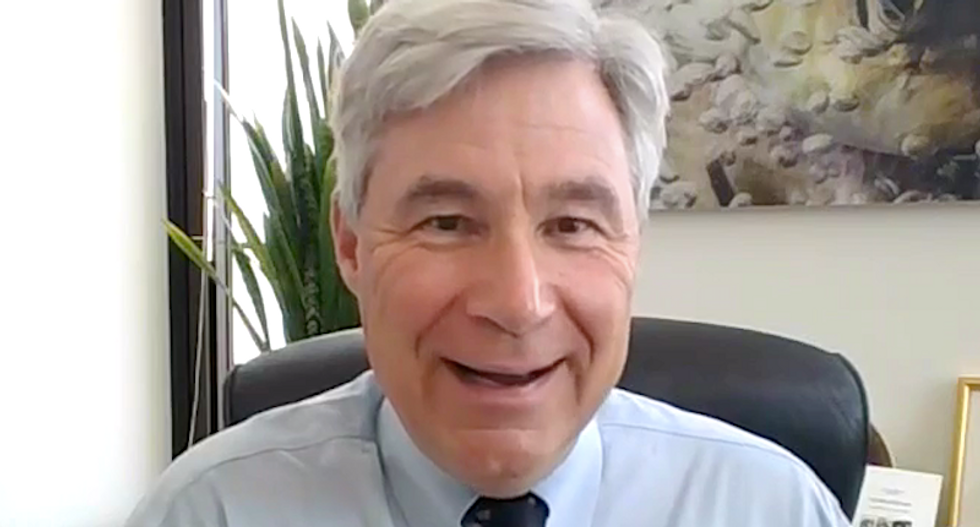 The Rhode Island Democrat has spent his time during the hearings exposing the shadowy right-wing network that's identifying, selecting and promoting judicial nominees, and Whitehouse went on MSNBC during the break to respond to Cruz's claims.

"Do you want this dark money nonsense or do you not?" Whitehouse said. "Republicans want it, we do not, but since the Republican majority on the Supreme Court created unlimited money in politics and allowed dark money to infiltrate that, we have to fight back, and we have no choice but to do that. I think we're doing the right thing to do that, but it's the height of hypocrisy to blame us for participating in a game that they have protected."

Whitehouse laughed as he called Cruz a hypocrite, and he brushed off host Chuck Todd's question about who was winning the messaging war.

"I don't know that it's a messaging war," Whitehouse said. "I think it's a war for integrity in government and a war for transparency and a war to get grubby special interest fingers out of places they don't belong. I think it's important that we win that war, and let me be clear about the Federalist Society, if I may. I have no objection to the Federalist Society on law school campuses. I have no objection to them running a think tank. What I object to is being anonymous donors, $250 million by the Washington Post's estimate, to take over and control who gets nominated to the United States Supreme Court. That is wrong. The Federalist Society should not be in that business, no private entity should be in that business and none of them should accept dark, anonymous money."

"Both the Republican Party and the Federalist Society are being used by these very big, very wealthy interests and industries to try and control the judiciary," he added, "and I think it's happening to a certain extent in plain view."

Whitehouse then suggested Barrett was being used as a pawn for these right-wing interests, just as Justice Brett Kavanaugh became after some unknown party spent $17 million to get him onto the court.

"I have concerns with her ideologically primarily," Whitehouse said, "and with the fact that so many Republicans who are involved in her appointment have been signaling what it is that she's going to do, and this rush to Nov. 10 obviously signals that's their idea of a torpedo at the Affordable Care Act, even if she doesn't think so."