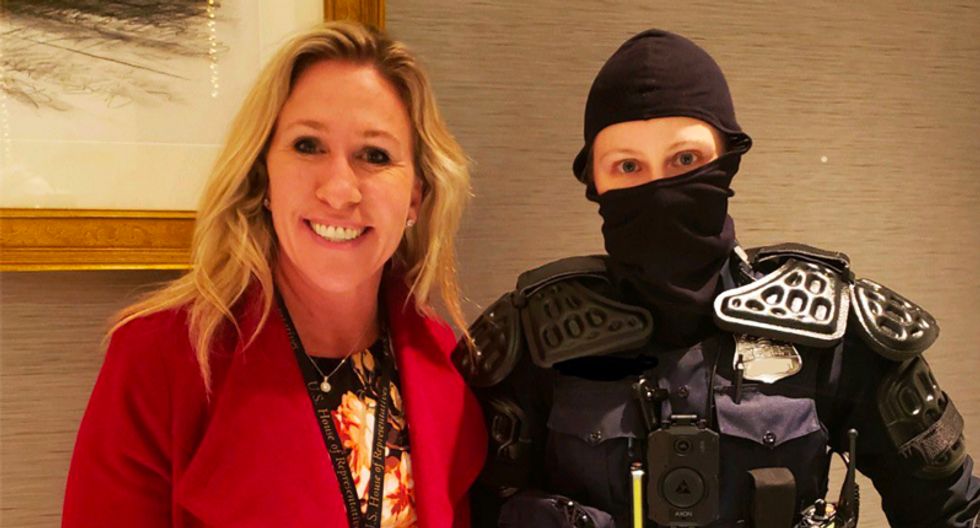 In a column for the Daily Beast, conservative Matt Lewis lamented the ascension of Representative-elect Marjorie Taylor Greene (R-GA) to Congress, saying Republicans will rue the day she steps onto the floor of the House.

According to Lewis, who left the Republican Party over Donald Trump, Greene is yet another in a long line of attention-hogging lawmakers -- similar to Trump, Sarah Palin or Michele Bachmann -- who capitalize on a "dumbed-down" Republican voters' desire for style over substance.

And that, he warns, will hurt the GOP much as Trump has done by putting her colleagues in the position of having to defend her attention-seeking shenanigans.

Writing the "rowdy rabble rouser focuses on fan service over persuasion, and promises to wreak havoc for fellow party members who are struggling to win competitive elections," Lewis added, "Politicians like Greene and the emergence of these disturbing trends are the inevitable result of a decadent political culture that is both dumbed down and performative. If you doubt this is (in part) performance art, consider the way Greene chose to make her point: she enlisted the mask controversy as an excuse to post a video of herself doing burpees, squats, and push-ups. Ever notice how it’s always people who are proud of their bodies who post these workout videos to Twitter? It’s like the guy in the stands at a major league baseball game who takes off his shirt. Sure, it might actually be hot outside, but that guy’s main goal is to flaunt his six-pack."

Noting that the newly elected congresswoman has kept up a steady stream of "look at me" tweets, Lewis suggested that the Georgia lawmaker is engaging in a culture war conservatives already lost and will be a distraction to the party that has just lost the White House to the Democrats.

Writing, "It’s important to note that Greene is a real-life QAnon supporter—not just a poser. This isn’t someone who used a hashtag she didn’t realize was connected to the kooky conspiracy theory," Lewis added she brings all the unwanted baggage that led to Donald Trump's demise and then warned, "Greene’s win highlights how the election results were a mixed bag for Democrats and also foreshadows how Trumpism won’t be leaving American politics (much less the Republican Party) with Trump come January. Buckle up. The fun has only just begun."