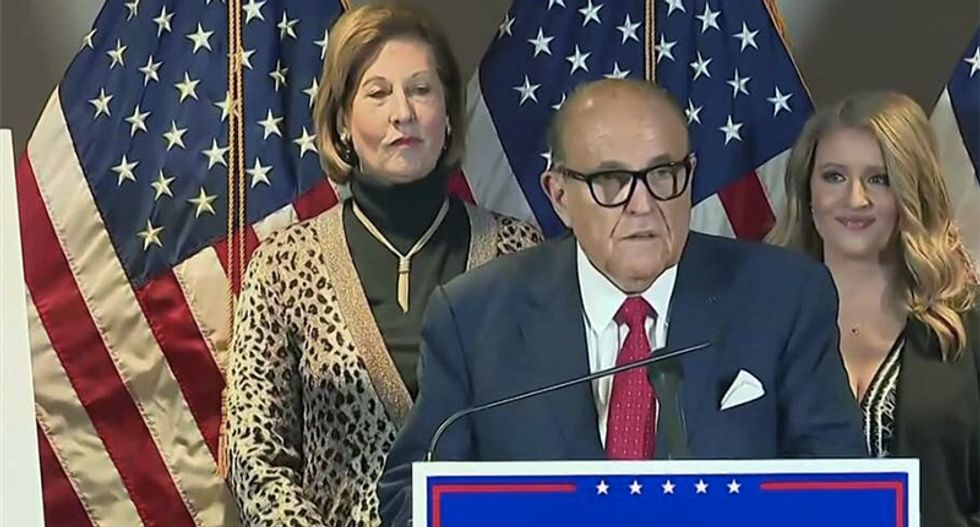 Lawfare editor Quinta Jurecic wrote a harsh editorial for The Atlantic Monday arguing that the efforts to harm American democracy deserve far greater punishments than the political ramifications they're dealing with currently.

Former federal prosecutor Glenn Kirschner agreed, noting that "if accountability does not come, then we are slouching toward the end of our republic."

If accountability does not come, then we are slouching toward the end of our republic. #TrumpCrimesCommission Becau… https://t.co/8Yy9yedsHG
— Glenn Kirschner (@Glenn Kirschner) 1606765858.0

Jurecic recalled in September when Trump was asked whether he would commit to a peaceful transfer of power, he replied, "We’re going to have to see what happens."

"If the vote had been closer, Trump’s efforts might have been enough to throw its results into doubt—a function, in part, of the rickety Electoral College system, which gives outsize importance to a handful of small-margin states," Jurecic explained. "The country is exceedingly lucky that Biden won so definitively."

That was part of the campaign effort from Democrats. Last Summer, former Secretary Hillary Clinton said that Democrats must win by such a large margin that Republicans can't steal it. Now it's Republicans claiming that the election was somehow "stolen" from them. The efforts, Jurecic explained, "are an affront to democracy," but no consequences will come from it.

Other than judges humiliating Trump's team in court, Bar Associations won't act to sanction the lawyers. Courts won't hold them in contempt. Even Republicans who have spent decades barking at "frivolous lawsuits," aren't standing up to declare the election decided.

"The question is whether, having demanded more and received a pittance, laws and institutions will respond," wrote Jurecic. "When Trump first launched his postelection blitz, it seemed possible that some of the state officials tangled up in the president’s flailing might face criminal liability. The Washington Post reported that following Trump’s call to a Michigan state official tasked with counting votes, and an invitation to the White House for two Michigan Republican legislators, the state’s attorney general is examining whether these officials might have broken the law—though the legislators later released a statement announcing their intent to 'follow the law and follow the normal process regarding Michigan’s electors.'"

"Given the sheer absurdity of this effort, lawyers and commentators have raised the question of whether the legal teams seeking to upend the election result might face professional consequences," wrote Jurecic. "Lawyers have a duty not to lie to the court. They also have a duty to avoid making arguments without legal or evidentiary support. These restrictions may be responsible for the decision by the Trump campaign and some pro-Trump lawyers to drop some lawsuits shortly after filing them: When push came to shove, perhaps substantiating some of the wilder claims proved impossible. The fear of repercussions may also be behind prominent law firms’ choice to abruptly abandon this litigation."

She also noted that rules governing lawyers' professional conduct have already revealed the fraud of behind the suits.

“This is not a fraud case,” Giuliani confessed to Judge Matthew Brann during the Pennsylvania hearing. It came just two days before Giuliani was ranting in a press conference. Powell then took to television to spin a conspiracy theory about the CIA and former Venezuelan President Hugo Chávez, who has been dead for seven years.

She cited Illinois law professor Jeffrey Parness, who said that judges could still take action against Trump's legal team if they wanted.

The problem is that most judges don't want to be seen “as someone who’s not concerned” by lawyers filing frivolous suits, Parness said. He cited Rule 11 in the Federal Rules of Civil Procedure, which allows judges to sanction attorneys who make false claims in court or refer their name to their state bar associations for further discipline. The likelihood, however, is slim. Even if they did hand down sanctions it would be "too little, too late," said Jurecic, as Trump has already achieved his goal of creating an alternative reality where he won the 2020 election.

"There is value to preserving the courtroom as a space where lies deflate," she continued, citing Dahlia Lithwick in a Slate piece saying, the “dull workaday evaluation of the difference between facts and falsehoods is still usually the best cure for the madness of this current moment.”

"Yet despite how swiftly Trump’s legal effort has collapsed under judicial scrutiny, Giuliani and Powell are onto something. You don’t actually need to win in court if your main goal is to sow doubt and make headlines," explained Jurecic.

She compared it to Trump's election commission chief Kris Kobach, who spearheaded an effort to find the 3 million illegal ballots cast by immigrants in California, that Trump claimed happened without evidence. Not only were they never found, they never existed. Kobach disappeared and the "commission" fell apart. In a 2018 case, a judge struck down a Kansas law Kobach championed demanding voters show proof of citizenship. He was also sanctioned by the judge for "poor behavior at trial." Kobach was ordered to take additional hours of continuing legal education to help refresh his memory about what he can do in court. He also was fined for misleading the court. Now he's helping Michigan officials trying to spread lies about the state's election.

The imagined "fraud," even if it is false, will likely become part of an effort by Republicans to pass even more restrictive voting laws to prevent Americans from access to the polls.

"Even criminal sanctions are not enough to protect against the gravitational pull of disinformation," said Jurecic. "If prosecutions arise out of Trump’s postelection scramble, the unlucky defendants would likely become right-wing stars, feted on Fox News for their persecution by the 'deep state.'”

Biden has chosen the route to project calm and reassure Americans that everything is fine, "chaos be damned," Jurecic said.

"This strategy has real merits as a means of denying disinformation the attention it needs to grow," she closed. "But, as president, Biden will have to grapple with a Republican Party that has created a world for itself in which the Democratic Party and its voters, particularly Black voters, are not legitimate participants in democracy. The ultimate problem, as it has been for the past four years, is a political problem posed by the Republican Party’s racism and authoritarianism. And the political problem, unlike Trump’s lawsuits, is not going away."

Read the full piece at The Atlantic.

Former President Donald Trump faces two political challenges outside his control that are unlike anything he's faced since he first announced his candidacy for president, according to Politico co-founder John F. Harris.

The U.S. Supreme Court that he largely struck down abortion rights last week, and the Jan. 6 Committee continues to reveal shocking details about his involvement in the insurrection, and the twice-impeached former president seems to understand those two stories are linked in a profound way, Harris argued in his latest piece.