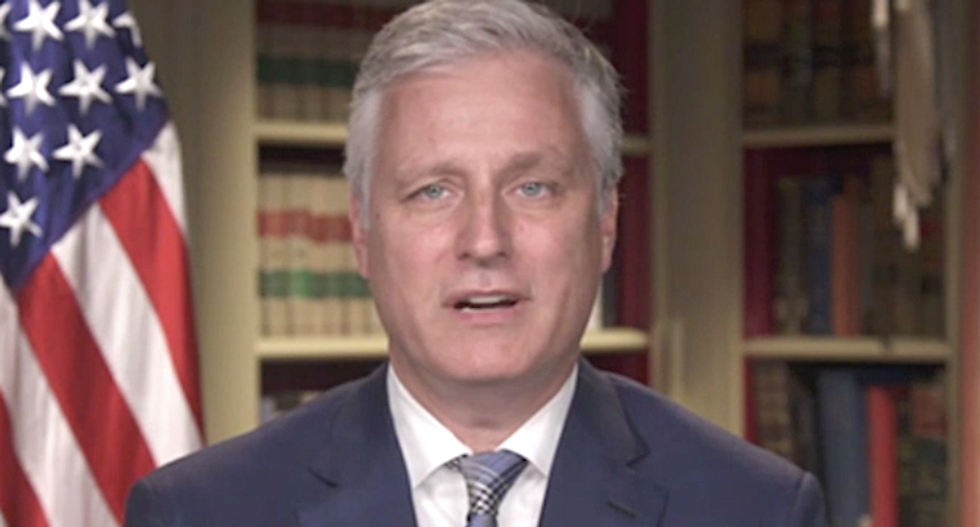 One of President Donald J. Trump's top advisers has undermined Republican attacks on the incoming Biden administration with talk of a "bipartisan consensus" concerning China, the Washington Examiner reported.

White House national security adviser Robert O’Brien was traveling this week in the Philippines when he said, “We’ve got such a series of unfair and difficult conduct on behalf of the Chinese that there’s a bipartisan consensus in America that we have to stand up to China."

O'Brien said that Biden would enjoy a “professional” transfer of power “if the courts don’t rule in President Trump’s favor.” Adding, “President Trump has not exhausted his legal remedies."

O'Brien referenced China’s claim to sovereignty over most of the South China Sea, a major waterway for international shipping. Chinese officials have reinforced that claim by building artificial islands that house military outposts in defiance of the sovereignty claims and economic rights of the Philippines and other neighboring countries, according to the Washington Examiner.

He told local media, “We are well beyond the days of imperialism where a country, because it is big or mighty, can simply take the patrimony of a smaller country because it has the might to do so."

O’Brien said Monday, “We also hope to expand our cooperation on a whole range of security challenges — from disaster relief to maritime security. Know that the United States stands shoulder-to-shoulder with the Philippines.”

“We firmly oppose these remarks which are full of Cold War mentality and wantonly incite confrontation,” the Chinese embassy in Manila said Tuesday in response. “It shows that his visit to this region is not to promote regional peace and stability, but to create chaos in the region in order to seek selfish interests of the U.S.”

The embassy statement accused O’Brien of trying “to sow discord between China and the Philippines,” while implicitly suggesting to Manila that alignment with the United States could breed tension with a powerful, permanent neighbor.

“China respects and appreciates the Philippines' independent foreign policy,” the statement read. “The Philippines' future will not float in anywhere, but will be deeply rooted in its own national development, in a stable and amicable neighborhood, and in a peaceful and prosperous Asian region.”

O’Brien’s claim that the Biden team will stand up to China stand in stark contrast to recent comments from GOP senators.

"I support American greatness," Rubio said. "And I have no interest in returning to the 'normal' that left us dependent on China."

Sen. Tom Cotton (R-AK) expressed concern that Biden's cabinet picks could “roll back all of the progress made against Beijing over the past four years.”

“As [former Defense Secretary] Bob Gates said, Joe Biden has ‘been wrong on nearly every major foreign policy and national security issue over the past four decades,’” Cotton said. Cotton is a leading critic of the Chinese Communist Party (CCP) in Congress. “Now he’s surrounding himself with panda huggers who will only reinforce his instincts to go soft on China.”

Cotton continued, “John Kerry will jet off to Beijing in pursuit of a climate accord with the world’s biggest polluter, the Chinese Communist Party. If Xi Jinping plays along, he’ll demand concessions. And we know what that means: more shuttered factories in the U.S., more hot air from Beijing.”

His attack on Beijing continued, “What else will Biden, Kerry and Blinken give away to ‘smooth relations’ with Beijing? Will they stop efforts to arrest Chinese spies on our campuses? Rescue China’s electronic surveillance company, Huawei? Weaken export controls? Delay arms sales to Taiwan? Reduce U.S. naval operations in the South China Sea? Prohibit our military commanders from speaking frankly about the [People’s Liberation Army]? Halt the development of U.S. intermediate-range missiles for deployment to the Pacific? It’s all on the table.”