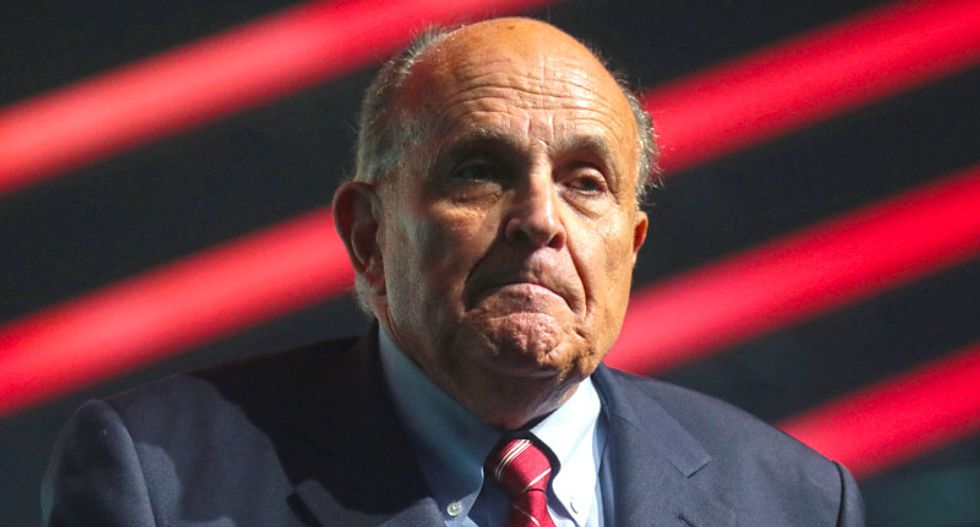 You just cannot make this stuff up.

Donald Trump’s crack legal team Thursday filed a lawsuit alleging Michigan fraud that cited a list of seemingly irregular township voting percentages. Unfortunately, the data in a supporting affidavit might have been more persuasive had it not come from two states away in Minnesota.

Yes, it appears “MI” for Michigan is easily confused by “MN” for Minnesota if the lawyers on your “elite strike force” legal team aren’t actually all that elite. In this case, the grievous error was flagged by none other than Powerline.com, a blog authored by some extremely conservative attorneys.

Attorney John Hinderaker--president of a conservative think tank and Powerline blogger-- cited two lists of townships voting percentages purporting to “show significant anomalies and red flags that we have observed…there is a significant probability that election results have been manipulated within the Dominion/Premier system in Michigan.”

‘‘Here’s the problem: the townships and precincts listed in paragraphs 11 and 17 of the affidavits are not in Michigan. They are in Minnesota. Monticello, Albertville, Lake Lillian, Houston, Brownsville, Runeberg, Wolf Lake, Height of Land, Detroit Lakes, Frazee, Kandiyohi–these are all towns in Minnesota. I haven’t checked them all, but I checked a lot of them, and all locations listed in paragraphs 11 and 17 that I looked up are in Minnesota, with no corresponding township in Michigan. This would have been obvious to someone from this state, but Mr. (Russell) Ramsland (the cyber-security expert who provided the affidavit) is a Texan and the lawyers are probably not natives of either Minnesota or Michigan.

“Evidently a researcher, either Mr. Ramsland or someone working for him, was working with a database and confused “MI” for Minnesota with “MI” for Michigan. (The postal code for Minnesota is MN, while Michigan is MI, so one can see how this might happen.) So the affidavit, which addresses “anomalies and red flags” in Michigan, is based largely, and mistakenly, on data from Minnesota.

“This is a catastrophic error, the kind of thing that causes a legal position to crash and burn. Trump’s lawyers are fighting an uphill battle, to put it mildly, and confusing Michigan with Minnesota will at best make the hill steeper. Credibility once lost is hard to regain. Possibly Trump’s lawyers have already discovered this appalling error and have undertaken to correct it. But the Ramsland Affidavit was filed in Georgia just yesterday.

‘A postscript: has Mr. Ramsland inadvertently stumbled across evidence of voter fraud in Minnesota? I seriously doubt it. The venues in question are all in red Greater Minnesota, not in the blue urban areas where voter fraud is common.

‘Trump’s lawyers have not yet had their day in court, but they will have to do a great deal better than this if they hope to succeed.”

So let’s this straight, from a conservative attorney with decades of experience: Not only did Rudy Giuliani’s clowns uncover evidence of apparent voting fraud from the wrong state, if they uncovered any irregularities at all, they only could have proven “anomalies and red flags” on the part of Republicans in Minnesota.

There are some fun facts here. For one thing, you’re probably not aware that Trump carried Detroit Lakes township (at least Becker County, which it anchors)-- by 30 percentage points over Joe Biden. But as suggested earlier, “Trump wins by landslide in Detroit Lakes” in western Minnesota might not have quite been the electoral equivalent of “Biden wins by landslide in Detroit” (the city in Michigan).

On the other hand, if one is going to mis-locate a township called Detroit Lakes, what better place to transfer it than a lawsuit over Michigan? Sounds close.

As if all that wasn’t good enough, the attorney filing the case is Lin Wood, who among his claims to infamy has been to represent one of the nation’s most noted Q-Anon conspiracy theorists, Congresswoman-Elect Marjorie Taylor Greene. That wasn’t lost on the website Law & Crime, which also enjoyed the irony of the false filing having been listed as "Exhibit Q” by Wood and his team.

“That the affidavit is marked “Exhibit Q” has a special poetic justice considering that Wood represents the Republican Party’s Congresswoman-elect Marjorie Taylor Greene, an adherent of the QAnon conspiracy theory that holds her soon-to-be colleagues across the aisle are members of a sinister cabal of child-raping Satanists,” reports Law & Order.

“A 9/11 truther and anti-masker, Georgia’s Greene is big on 2020 election revisionism, too, parroting baseless theories about Dominion Voting Systems to explain why voters in the Peach State and across the county rejected the incumbent in favor of President-elect Joe Biden.

Law & Order also reported that things haven’t turned out so well in the case for Wood. Here’s how it laid that all out:

“ In one of the unkindest cuts for the lame-duck president on Thursday, Trump-appointed U.S. District Judge Steven Grimberg scathingly dismissed attorney Lin Wood’s attempt to block certification of Georgia’s vote in a lawsuit the state said aimed to roll back the clock to the Jim Crow era.

“To halt the certification at literally the 11th hour would breed confusion and disenfranchisement that I find have no basis in fact and law,” Judge Grimberg declared from the bench at the end of a roughly two-and-a-half hour hearing.

“The judge appears not to have been persuaded by such evidence as the affidavit labeled on the docket as “Exhibit Q,” which argues that the Georgia vote is untrustworthy because more people voted in Michigan than live in Minnesota.

Yes, really. Now, on to another state, Trump crime-fighters. How about throwing out some Trump votes in Minnesota?

Opinion SmartNews
Please contact support@rawstory.com for customer support or to update your subscription. Report typos and corrections to: corrections@rawstory.com.