WATCH: Maddow offers fascinating theory as to why Trump may pardon Michael Flynn 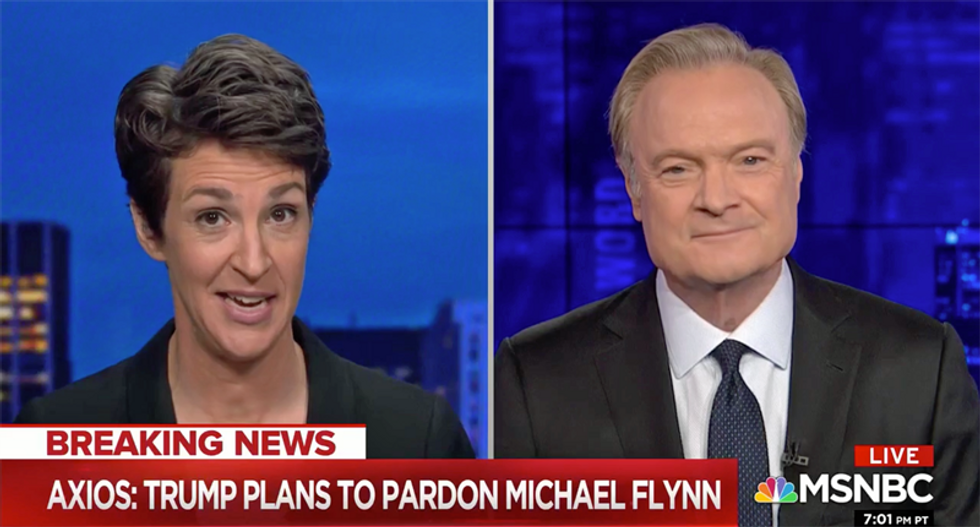 On Tuesday night, Axios reported that Donald Trump had informed confidants he will pardon former National Security Advisor Michael Flynn for lying to the FBI about his Russian contacts.

During the handoff between their MSNBC shows, Rachel Maddow discussed the reporting with Lawrence O'Donnell -- and offered an intriguing explanation that it may be linked to the Trump campaign's legal woes.

"Good evening, Rachel," O'Donnell said. "And on the day that the president pardoned the turkey, as is traditional, the talk of pardons has started tonight. There's a new report out tonight saying Trump confidants say he plans to pardon Michael Flynn."

"Michael Flynn's lawyer, you'll remember, is the crazy Qanon lady who did the Grecian Formula-failure press conference with Rudy Giuliani and then said, you know, the Georgia Republican governor was in cahoots with Hugo Chavez -- who's dead -- in order to rig the election," Maddow noted, referring to Sidney Powell.

"I mean, that's Mike Flynn's lawyer," she continued. "So when the Trump folks put out the statement throwing her under the bus this weekend, maybe that was the agreement to soften the blow. "Don't worry, we'll pardon your felon National Security Adviser client for lying about his contacts with the Russian government, don't worry, we'll pardon him too so you'll get something out of the deal.'"

"It's just a really nice group of folks. We'll be sorry to see them go," Maddow added.