'What is voter intent?' Fox News tries to shift narrative 'from counting votes to what is a vote?' 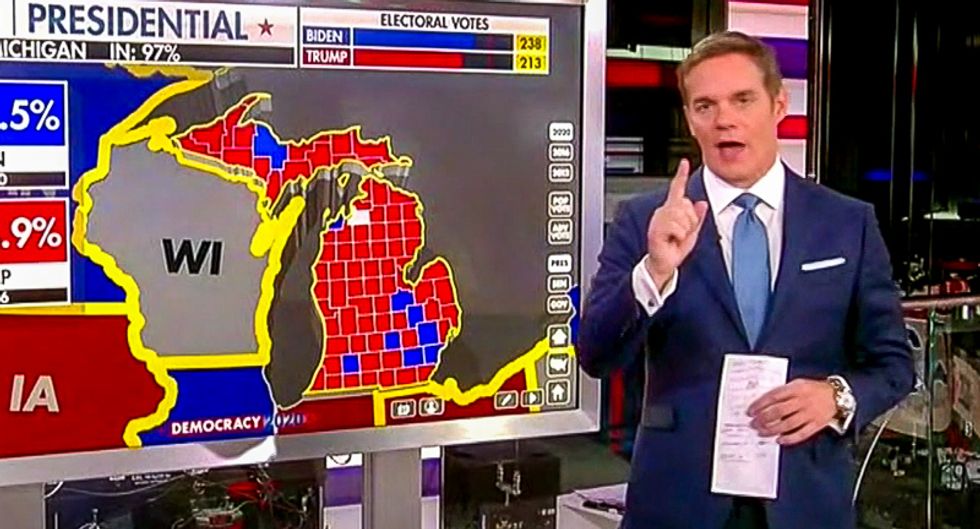 A Wednesday discussion on Fox News tried to shift the narrative from "counting votes" to what network contributors called "voter intent."

As Democratic nominee Joe Biden narrowly pulled ahead in Wisconsin and Michigan, Fox News host Bill Hemmer suggested that counting votes was less important than the "intent" of the voter.

Hemmer compared the 2020 election to the 2000 presidential race in Florida, which was challenged in the courts.

"We were talking about last night about count every vote," Hemmer said. "You know, that theme from Democrats and Al Gore. Makes a lot of sense. But what [law professor] Jonathan Turley said about 20 minutes ago makes a lot of sense too. Because we've moved from counting votes to try and figure out what is a vote?"

"The situation in Florida led all the courts and ultimately to the U.S. Supreme Court to try and figure out what is voter intent?" he continued. "You're going to hear a lot about that phrase. What is the intent of a voter?"

Hemmer added: "This whole question of voter intent, just to prepare our viewers, if we go to the courts now, that's going to be the movement and really where the intensity for the story goes. And it's going to be less about the numbers on this map throughout the country and more about a couple thousand votes here, a couple hundred votes over here."

"It seems like the voter intent question this time around will be focused on those mail-in ballots, Bill. And whether or not -- if someone didn't sign it and they sent it in -- is that voter intent? Things along those lines," MacCallum said. "If they sent it in and it doesn't have a postmark, does that make it clear that they obviously wanted to vote? That's going to be our version of the hanging chad."

"You're right, Martha," Hemmer replied. "We're just starting to get into those definitions."