'What the hell?' The View struggles to process Rudy Giuliani's 'tragic and pathetic' behavior 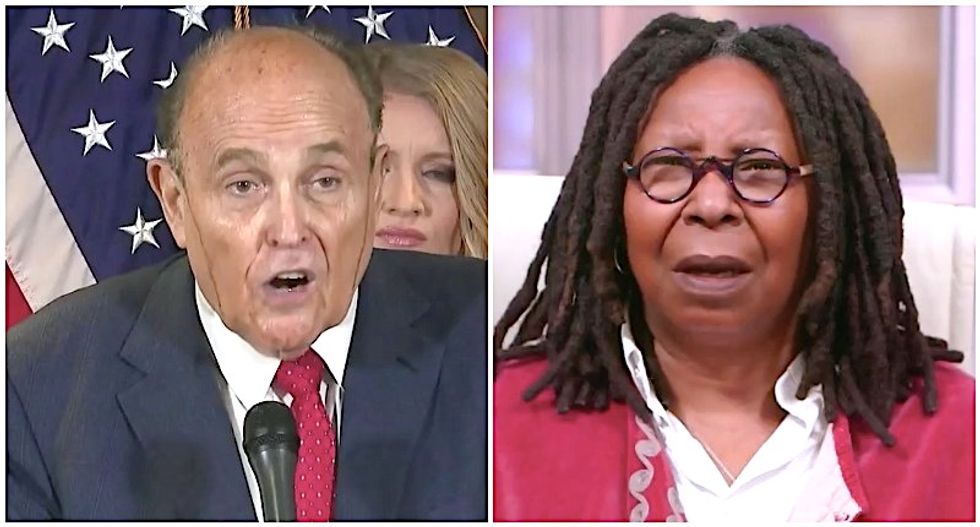 "The View" panelists struggled to make sense of Rudy Giuliani's strange news conference to fling out claims of election fraud.

President Donald Trump's attorney made outlandish allegations about foreign interference from long-dead leaders and made unsubstantiated claims that aren't even mentioned in their lawsuits, all while sweating profusely and dripping black liquid from his scalp.

"What the hell?" said host Whoopi Goldberg, reacting to video of Giuliani. "Okay, there is a lot to process here."

"I saw a guy that looked like the witch melting in the 'Wizard of Oz,'" Navarro said. "I saw a guy, I literally, you know, when the hair dye started streaking down his face, it was, like, I thought maybe it was the B.S. that was spewing out of his mouth coming out of his ears. It was such a tragic, pathetic, funny, ridiculous image, and I think it embodies so much of the insanity of what's going on right now."

"I feel embarrassed for the country that people are witnessing this," she added. "I feel embarrassed for Rudy Giuliani. 'America's mayor' has somehow come down to this as he tries to make crazy excuses and justifications for Donald Trump. It is pathetic and desperate attempts at overturning an election result, the will of almost 80 million voters now, and it's not going to work, but it's, you know, what a sad, sad ending and tragic ending. Honestly, it's unbelievable."