'Acting-AG Rudy Giuliani?': Americans speculate if Bill Barr will be fired after declaring no 2020 election fraud 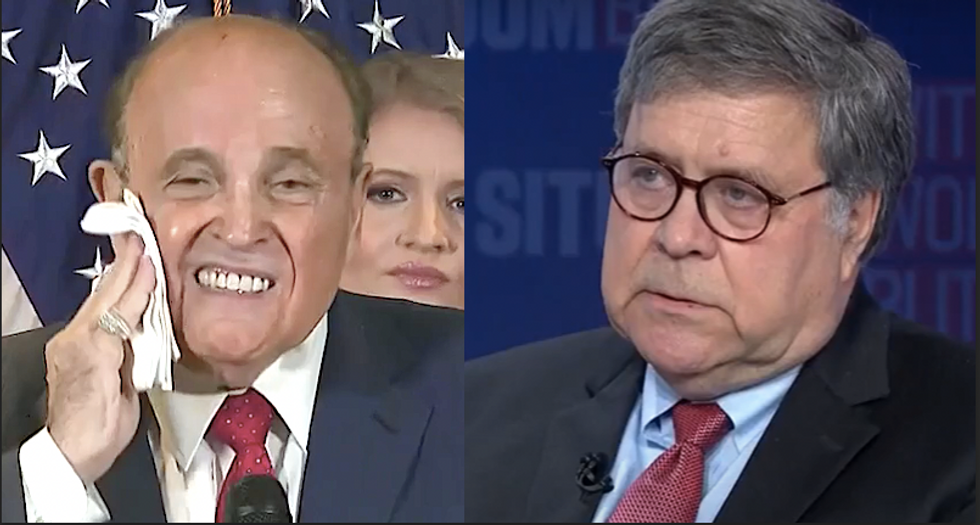 Attorney General Bill Barr arrived at the White House a little before 3 p.m. EST. Moments before he arrived, the Associated Press released an interview in which Barr said that there was no massive voter fraud in the 2020 election. It flies in the face of Trump's accusations that there was an outbreak of voter fraud in all of the states in won by President-elect Joe Biden.

It prompted speculation on whether Barr would be fired by Trump, who the new acting attorney general would be and when to expect the president lashing out about Barr on Twitter. Even Sen. Chuck Schumer (D-NY) made the joke, according to CNN's Manu Raju.

“I guess he’s the next one to be fired,” Schumer says of Barr after the AG said no evidence of fraud that would overturn the elections
— Manu Raju (@Manu Raju) 1606853212.0

Lawyer Rudy Giuliani also took a swipe at Barr from the Trump campaign.

The last staffer Trump fired for denying mass voter fraud was his director of the Cybersecurity and Infrastructure Security Agency, who appeared on "60 Minutes" Sunday to denounce the president's conspiracy theories.

See the responses to Barr below:

Having fought Barr as impeachment co-counsel and since, this is remarkable. Barr was willing to embrace and promot… https://t.co/Fn2QOgxPAt
— Norm Eisen (@Norm Eisen) 1606852637.0

The fact that Barr has now admitted reality should not excuse anything else he's done. He gave federal prosecutors… https://t.co/ME3pozlto8
— digby (@digby) 1606852271.0

If Trump fires Barr for failing to stoke baseless conspiracy theories, it will be perhaps the defining proof that e… https://t.co/x1nXc91VCr
— Heath Mayo (@Heath Mayo) 1606852591.0

Barr being at the White House is interesting giving the timing, and because there was no previously disclosed Trump… https://t.co/8chO5kjNAe
— Angry Staffer (@Angry Staffer) 1606852608.0

Warning, before you read the following, please remember that Barr nonetheless is a man who systematically has tried… https://t.co/Im822EwsYl
— David Rothkopf (@David Rothkopf) 1606851917.0

Bill Barr is trying to get fired. He thinks that will look better in the history books. It won’t.
— Mark Schweitzer (@Mark Schweitzer) 1606851966.0