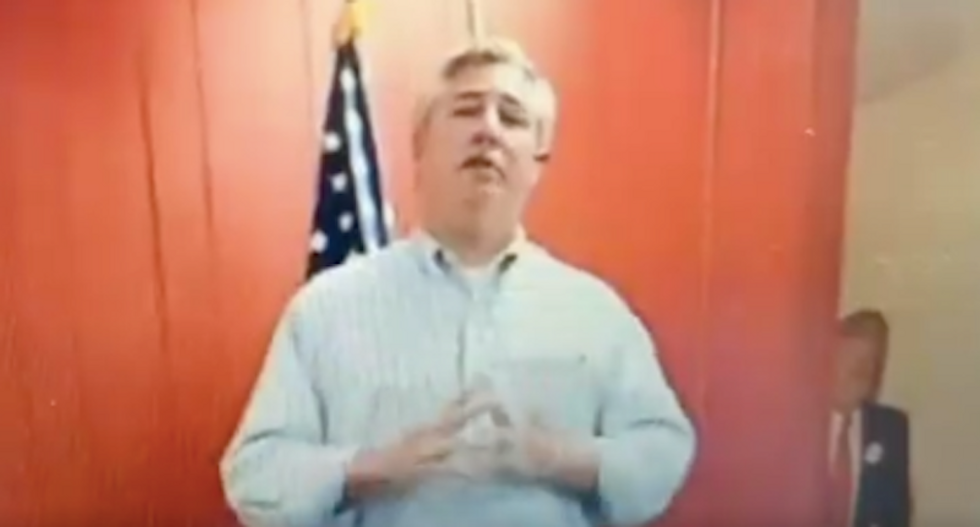 A Florida attorney was caught on tape outlining his plan to vote illegally in Georgia's runoff elections and encouraging fellow Republicans to do the same.

Attorney Bill Price was recorded on a since-deleted Facebook Live video describing his plan to commit voter fraud to the Bay County Republican Party members on Nov. 7, about a half hour after the presidential election was called for Joe Biden, reported WSB-TV.

“I’d love to tell you that there are legal avenues for success in the courts, but as a realist and as a lawyer myself, I know that that’s just not going to happen,” Price told the GOP gathering.

Price told the crowd that he was moving to his brother's address in Hiram, Georgia, to register to vote in the Jan. 5, and he spells out his brother's name and address as other Republicans take notes, and some can be heard murmuring the information as they write.

“We can truly register at that address?” asks one woman.

“Sure,” Price says, but suggests having mail sent there to show a move to the state.

“And can it be anywhere in the state of Georgia you can register?” another woman asks. “So if you’ve got cousins, dogs, cats that live somewhere else, it doesn’t need to be one particular county?”

“Yep,” Price says. “This is going to be a statewide election on Jan. 5. I’m going to be voting for Kelly Loeffler and David Perdue.”

One woman asks about the registration deadline, which is Monday, and Price says he's not sure but advises her how to check online.

“It can be done online or you can request your ballot at your new address in Georgia by mail,” Price says. "You just go to the secretary of state’s website for the state of Georgia and register to vote there.”

Price tells the Republican gathering that he's planning to get a Georgia driver's license and have mail sent to his brother's house to vote in the runoff, and warns the crowd that the stakes are high.

“We have to win that election in Georgia, and so I’m moving to my brother’s house in Hiram, Georgia, and I’m registering to vote,” Price says, “and we are going to win that election in January. That’s what needs to be done. If you don’t want to do it, fine. Might as well move to Venezuela now. Get used to that lifestyle, because that’s what’s coming.”

“This isn’t California,” Fuchs said. “We actually investigate and seek to prosecute individuals who try vote here illegally. Our system is built to prevent this behavior— we will seek to prosecute to the fullest extent of the law.”

Georgia officials have been warning for weeks that registering to vote in the state with no intention of staying there can be punishable with felony charge that can carry up to a 10-year prison term and $100,000 fine.

Price told WSB that his comments at the meeting were intended as a joke, and he insisted that he hadn't actually gone through with the actions that he had described last month.

"I did not change my voter registration and I don’t have 2 million roommates,” Price said. "But if my humorous comments bring attention to the massive and widespread voter fraud in Georgia, I would submit to you that it’s a good thing.”

However, WSB confirmed that Price had, in fact, registered to vote Nov. 8 using his brother's address and swearing to an affidavit that he was a Georgia resident and eligible to vote.

"We clearly know that he is not,” said Deidre Holden, Paulding County’s election supervisor.

Holden said her office was going to write Price and ask him to bring in his driver's license to "cure" and complete his registration, and her office had been contacted by state elections investigators who flagged his registration address and shared the Facebook Live video with her.

“What kind of message is this sending out to our children and our grandchildren and our neighbors that if you don’t win an election, that you can just go out and steal one?” said Holden, who is also a Republican. “That’s absolutely unacceptable here in the State of Georgia.”