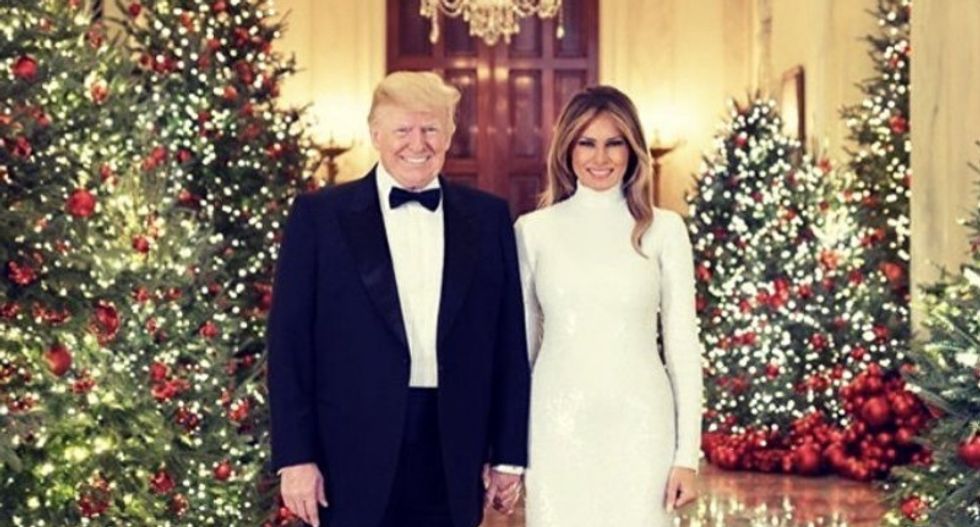 Donald and Melania Trump in front of the White House's Christmas trees. Image via White House.

On Monday, Politico reported that Republican lawmakers are spending lavishly on Christmas parties in Washington, D.C., as the COVID-19 pandemic ravages the nation.

"Some corners of the GOP, including members of Congress, are refusing to let the coronavirus intrude on their holiday gatherings and in-person fundraisers," report Sarah Ferris, Melanie Zanona, and Daniel Lippman. "The event planning comes as the nation is battered by another brutal surge in coronavirus cases, prompting a fresh round of warnings from public health experts to hunker down and avoid group settings, particularly indoors. And it underscores the resistance by many in the GOP, led by President Donald Trump, to adjust to the new normal of the pandemic."

According to the report, "Groups of dozens or more people have flocked to congressional hangouts such as the nearby Capitol Hill Club, where a group of Texas Republicans organized a meet-and-greet to honor their seven incoming freshmen members the week before Thanksgiving ... GOP members have also gathered at swanky downtown restaurants. That includes a holiday party Monday night hosted by Rep. Billy Long (Mo.) in a backroom at Joe’s Seafood, an upscale surf ‘n turf restaurant near the White House, according to a person familiar with the plans. The same evening, Rep. Kevin Brady hosted a 'small' dinner at the same restaurant for all the outgoing Texas Republicans, his office confirmed."

This comes as Trump himself is planning to host a number of in-person Christmas parties, and Secretary of State Mike Pompeo has planned a 900-person gathering even while telling federal employees to put off "non mission-critical events."

“I think it’s absolutely insanity and I think it’s dangerous, it’s irresponsible, it’s insane," said Washington veteran journalist Sally Quinn. "And I think just by example, they’re going to cause more people to die because people will look at that and say, ‘Oh, it must be okay.’”