'Spare me the hypocrisy’: The View co-hosts unleash on the latest Republican ‘pearl-clutching’ 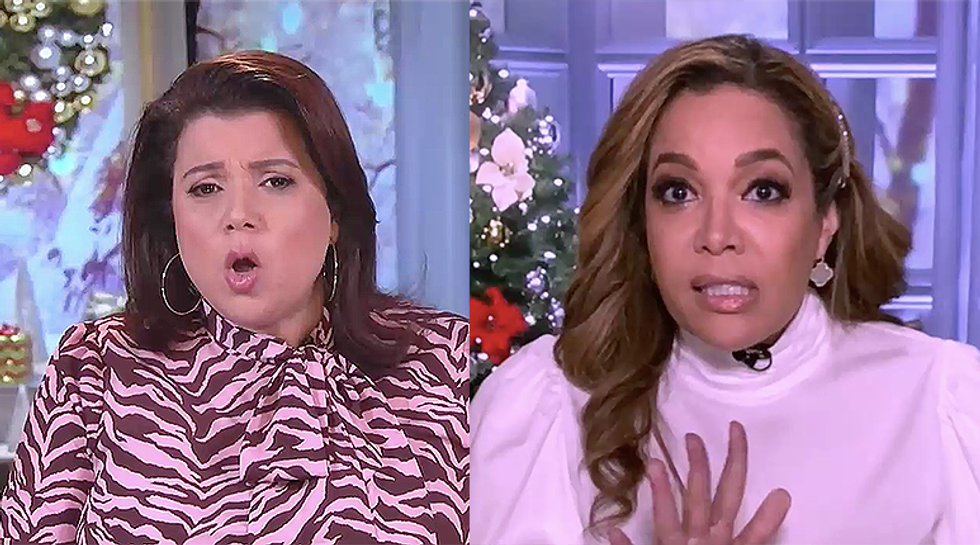 The women of "The View" unleashed on Republicans for losing their minds over a top aide to President-elect Joe Biden referring to some members of the U.S. Senate as "f*ckers."

"President-elect Joe Biden's incoming deputy chief of staff Jen O'Malley Dillon has some up in arms, though I don't get why because in the interview where she talks about how Biden was initially mocked for saying he can work with the GOP, but she also called Republicans a bunch of -- words that I would love to say on TV but I can't and singled out Mitch McConnell, who should have been singled out, okay," said Whoopi Goldberg. "What did you think of her comments, Ana? I thought they were not -- over the last four years everything we've heard, I didn't think her comments were bad at all."

"I have an issue with Marco Rubio and other Republicans -- I guess he's been a little busy tweeting Bible verses and might have missed when the president they've been genuflecting to the last four years boasted about grabbing a woman by a word I can't say on TV or said that people that came from Africa and Latin America came from countries that I can't say on TV or called Black athletes who took a knee 'sons of bitchs' and when Ted Yoho calls Alexandria Ocasio-Cortez a 'bitch' at the capitol?" Navarro began.

She went on to say that anyone who's been fine with the last four years has no place to speak.

"If you were okay with the likes of Steven Bannon as chief of staff and okay with the likes of Stephen Miller, if you've been okay with a president who paid hush money to a stripper and who has given us a slew of bad words we can't say on TV then I think you really should save your outrage, your faux outrage for an Emmy or Oscar-nominated speech at some point but just spare us this level of hypocrisy for the love of God. Spare me the hypocrisy at this point so close to Christmas."

Sunny Hostin explained that O'Malley Dillon wasn't entirely "off message" saying that there are a number of Republicans eager to get the government back and working for Americans, but that people like McConnell are gumming up the works.

"I think they are parsing what she said because she used an expletive," said Hostin. "If you look at everything she said the president-elect was able to connect with people over the sense of unity and then she says 'I'm not saying they are not a bunch of [expletive] -- Mitch McConnell is terrible -- but she says 'you couldn't wish for this bipartisan ideal. He rejected that.' And, so, she's just -- I don't detect any lies there. She said they've been difficult to work with. This is the president that they're genuflecting to but Joe Biden is different. He wants to work across the aisle. So, I'm not sure where this faux outrage is coming from."

Joy Behar said that this is just another example of Republican men going after women they set different standards for.

Goldberg cut back in to say that for the past four years she's heard Democrats called some really horrific things.

"I don't recall going back and forth before, the really nasty thing for me is that they sit there and they pretend like they're so hurt by this, they clutch the pearls," she said. "Well, here comes everybody's hand. We're snatching your hand down and saying, 'Listen, now is not the time to clutch. You should have clutched four years ago but you didn't so we get it.'"

She recalled McConnell telling the world that he would make former President Barack Obama a "one-term president" and that "this man has been an [expletive] for 12 years now."

"So, I think she's been very nice bit but let's not forget what the Republicans allowed to have happen here," said Goldberg. "And thank God they started to wake up and see that it doesn't work for the country."