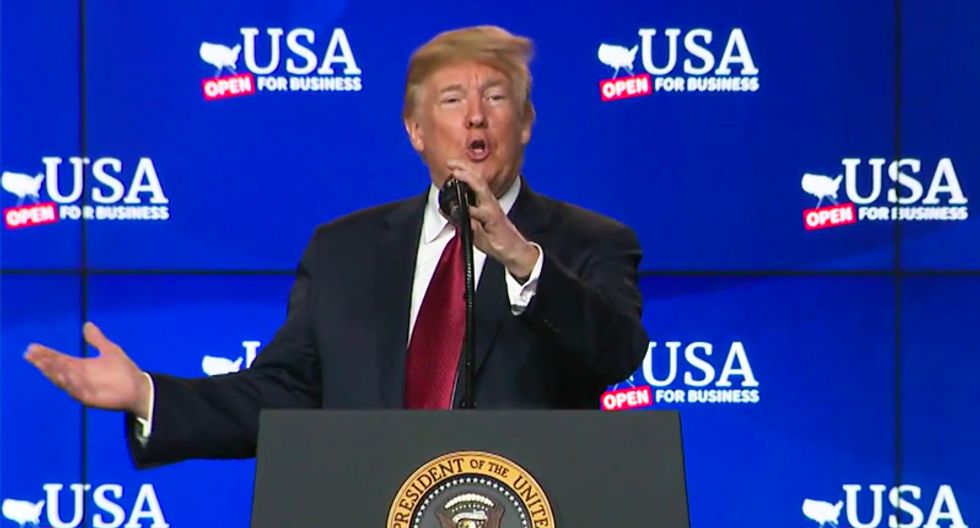 According to a report from the Guardian, residents in Mount Pleasant, Wisconsin are furious that they were forced from their homes to make way for a planned Foxconn factory that was touted by Donald Trump and former GOP Gov. Scott Walker -- but never materialized.

In 2017, the then-Republican governor and the president announced with great fanfare that Foxconn would be building a $10 billion factory in the town -- with the help of over $4.5 billion in state government incentives spearheaded by Walker -- that would one day employ over 13,000 workers making LCD displays.

However those plans "imploded" reports the Guardian resulting in a facility 20 times smaller that is essentially a warehouse.

In November, Ars Technica reported, "... the state informed Foxconn that the company wouldn't get the first installment of the $3 billion because Foxconn wasn't holding up its end of the deal. Under Foxconn's 2017 agreement with the state, Foxconn would be eligible for the first round of subsidies if it hired at least 520 full-time employees to work on the LCD panel factory by the end of 2019. Foxconn claimed that it had cleared this bar by hiring 550 employees in the state. But Wisconsin found that Foxconn had only 281 employees who counted toward the requirement."

As the Guardian reports, residents of Mt. Pleasant are still reeling at losing their homes and promises unfulfilled.

While the president promised the plant would be the "eighth wonder of the world," the report points out that the majority of site of the proposed plant is instead a barren stretch of land where houses used to exist.

According to local Sean McFarlane, he lost his home to the planners and now wonders how it all could have fallen apart.

"Three years later, the factory for which the family went through hell hasn’t been built. Sitting in his wheelchair on an empty sidewalk in November, McFarlane sighed in disbelief as he scanned the vast patchwork of mud, open fields, ponds and a few underutilized buildings comprising the 3,000-acre Foxconn site," the report states with McFarlane lamenting, “They demolished my house for this? A bunch of geese that sit on a hill?”. It’s upsetting. That’s where my old house was, and now it’s just nothing. You know? Nothing.”

According to the report, many residents are pointing the finger at local politicians who were eager to do what it took to get the plant, with the Guardian's Tom Perkins writing, "Village leaders upended lives in the name of acquiring property for the company, residents say. Some continue to fight for their land while others took inadequate relocation packages and left. A few saw their homes seized by the village."

In an interview, Kelly Gallaher, a vocal critic of the project claimed, "There was a bit of evilness to all of this. The kind of things they pulled really did traumatize a lot of people.”

In the case of the wheelchair-bound McFarlane, his relocation was nothing less than a disaster.

"Mount Pleasant offered a relocation payment of $22,000 to McFarlane, who was a renter, and over $500,000 to his mother, Sherri Shaver, who was a homeowner. It also housed McFarlane temporarily in a village-owned home, and the family was shocked to discover as they moved in that it had sat vacant for several years. Aside from no heat or working toilets, it had been vandalized, had three feet of water in the basement, was mold infested, had doorways that were too small for McFarlane’s wheelchair, and its sinks spit out tainted water that left rashes on his kids’ skin," the report states before adding, "Then the situation took another ugly turn: Mount Pleasant’s leadership withdrew its offer for McFarlane’s payment, he said, and threatened to sue Shaver over an unrelated matter if he fought them. Despite tearfully pleading for the money before the Mount Pleasant board of trustees, the relocation payment never arrived. McFarlane said he was told by village officials that the payment to his mother was enough for the entire family."

“There’s no explanation for why they did it, except that they could, and I felt like a stupid dummy for trusting them,” McFarlane, who has since moved, told Perkins. “I don’t know why I did. I feel like I let my family down. I’m just glad we’re not in Mount Pleasant anymore. Thank God."

You can watch video of Trump's promotion of the