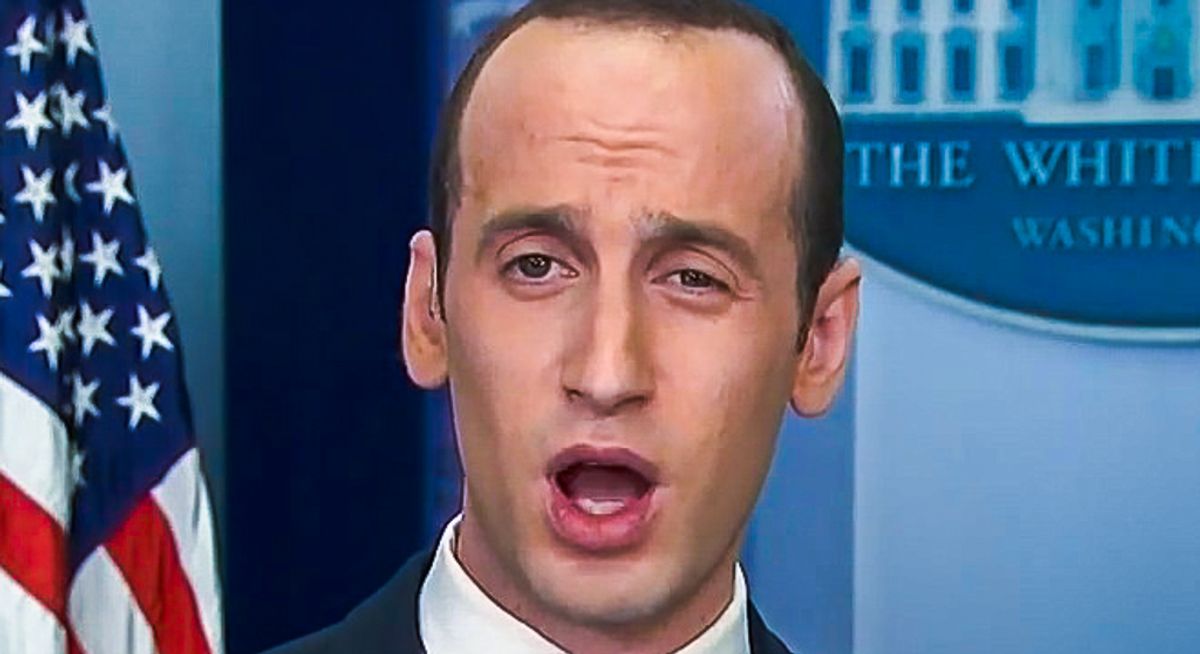 During an interview by Fox host Maria Bartiromo, Miller's advised listeners "to go to aflegal.org to find out more, that's aflegal.org and you learn all about it" with regard to his America First Legal Foundation (AFL).

I can't say for sure that I really "learned all about it." No doubt, the basic mission's clear enough:

"Fight Back Against Lawless Executive Actions and the Radical Left."

It continues: "All citizens deserve a government that puts their needs and their country first. This is the system of law established by our Founding Fathers. America First principles are now under attack like never before. Our security, our sovereignty, and our liberty are being systematically dismantled. There is only way to stop the constant onslaught from the radical liberals in Washington: take them to court. And that is what we are here to do."

Understood. But once you click on "Join the Fight," things get a bit murkier. For example, right above the opportunity to donate is a disclosure that this group -- formed to take on radical liberals by suing them-- has an application pending with the IRS to become designated a 501 (c) (3) tax-exempt organization.

I'm no accountant, but I'm pretty certain that this is the status given to apolitical, educational or charitable groups. This is the IRS' take on that subject.

But I suppose in the worst case, my quarterly donation of 5 cents would not be tax deductible.

There is a news section, linking five stories in the past month. The first was about the founding of AFL, which identified Miller as the group's president. There's a press release attacking President Joe Biden over gun policy and three righteous legal activities right out of the blocks: 1) joining Texas's lawsuit against the Biden Administration border policies as outside counsel; 2) suing Biden on behalf of white farmers and ranchers; and 3) a brief in Texas Supreme Court "to remedy San Antonio's cancelling of Chick-Fil-A."

That's something, but it still didn't tell me "all about" AFL. The "About" page didn't help. It just offers more words about "the radical left's anti-jobs, anti-freedom, anti-faith, anti-borders, anti-police, and anti-American crusade."

The contact page didn't help either. It's just an email form to send into the stratosphere. There's no street address, nor a telephone number, nor an actual person to contact.

So I clicked on "Team." If there's a staff, it's anonymous. All that's listed are thumbnail photos and bios of Miller and six other members of a Board of Directors. They include Trump Administration veterans Mark Meadows, Matthew Whitaker, Russ Vought and Gene Hamilton, plus Ed Corrigan and Wesley Denton, identified as CEO and COO of something called the Conservative Partnership Institute (CPI).

All seven are white men, which is not altogether surprising. Not mentioned is that Meadows, Trump's erstwhile chief of staff, had joined CPI as its Senior Partner in January.

So, let me get this straight. My quarterly donation of 5 cents is going to a group with no apparent address, phone number or staff, presumably to cover some unspecified legal expenses. And it might not even be tax deductible. That's all I could find by taking Miller's advice to go to his new website to "learn all about" AFL.

Who knows? Maybe it will end up being a more substantial entity like CPI. Now, to be honest, I hadn't heard about CPI before now, but it turns out to be something. The organization was formed in 2017 by former Senator Jim DeMint, R-South Carolina.

CPI states this on its "About" page: "Washington is an easy place to become overwhelmed. We're supporting, training and educating conservatives to advance their principles in the nation's capital (sic)."

CPI is a little more specific than AFL on its "Support" page. For memberships ranging from $25 to $10,000, "your support for CPI will help our team of Capitol Hill veterans train, equip and unite conservatives in Washington."

Somehow, that's tax deductible, according to the CPI website. CPI lists 14 staffers. All of them, of course, are white people-- including DeMint, Meadows, Corrigan and Denton.

The most recent tax form easily accessed online for CPI was from 2018: Form 990 (Return of Organization Exempt from Income Tax). In the filing, CPI reported revenues for $4.3 million in revenue and $4.2 million in expenses. The spending includes no dollars for advertising, which might explain why CPI isn't a household name.

The only 2021 public-record information regarding CPI's activities comes by way of ProPublica, in its cataloging of "privately funded travel by members of the House of Representatives.

Among those members of the House whose February travel to Miami was sponsored by CPI were Reps. Marjorie Taylor Greene, Lauren Boebert, Mo Brooks, Paul Gosar, Louie Gohmert, Jim Jordan, Andy Biggs and Randy Weber, according to ProPublica.

It is unclear whether Miller intends for AFL to become CPI when it grows up.

Although Donald Trump went down in history as a one-term president when he was voted out of office in 2020, he accomplished something that the United States' last two one-term presidents—Democrat Jimmy Carter and Republican George H.W. Bush — didn't: Trump appointed three justices to the U.S. Supreme Court. Justice Neil Gorsuch in 2017, Justice Brett Kavanaugh in 2018 and Justice Amy Coney Barrett in 2020 were all Trump nominees. In an article published by CNN's website on May 5, legal analyst Joan Biskupic lays out some reasons why Barrett has been more of a game-changer on the High Court than Kavanaugh.

Kavanaugh was a game-changer in that he replaced a libertarian: former Justice Anthony Kennedy, who retired in 2018. Appointed by President Ronald Reagan in 1987, Kennedy was a right-wing libertarian who was fiscally conservative but socially liberal and often sided with the late Justice Ruth Bader Ginsburg over far-right social conservatives such as Justice Clarence Thomas and the late Justice Antonin Scalia when it came to abortion or gay rights. And Trump replaced a libertarian with a social conservative.

A predicted baby boom failed to materialize in the United States in 2020, with births down four percent compared to the year before despite Covid-19 lockdowns, an official report said Wednesday.

Some 3.6 million babies were born in 2020, according to the National Center for Health Statistics (NCHS). It was the sixth consecutive year that births have declined after an increase in 2014, and the lowest number of births since 1979.

House Minority Leader Kevin McCarthy has asked Rep. Liz Cheney of Wyoming to tone down her criticisms of former President Donald Trump; instead, the arch-conservative GOP congresswoman and daughter of former Vice President Dick Cheney is sticking to her guns, continuing to blame Trump for the January 6 insurrection, and maintains that she views President Joe Biden as the loyal opposition — not her enemy. Rep. Cheney, like Sen. Mitt Romney, has become a pariah in much of the Trumpified GOP. But the Wall Street Journal's conservative editorial board, in a biting editorial published on May 4, slams House Republicans who want to remove her from a position of leadership for being anti-Trump.

"Ms. Cheney easily survived an earlier effort to dump her, 145-61, after she was one of ten House Republicans to vote to impeach Donald Trump after the events of January 6," the WSJ editorial board explains. "But she continues to rankle some in the GOP House conference by refusing to go along with Mr. Trump's demand that Republicans agree that the 2020 election was stolen."

Guy Fawkes impersonator busted for Capitol riot: ‘They didn’t try to stop us like they should have’

Vice chair of US gov’t. religious freedom group boasts ‘Warriors for Christ’ were created to ‘take over the world'

QAnon cultist businessman goes on Newsmax to say ‘Trump is president’ and JFK Jr. is his Veep