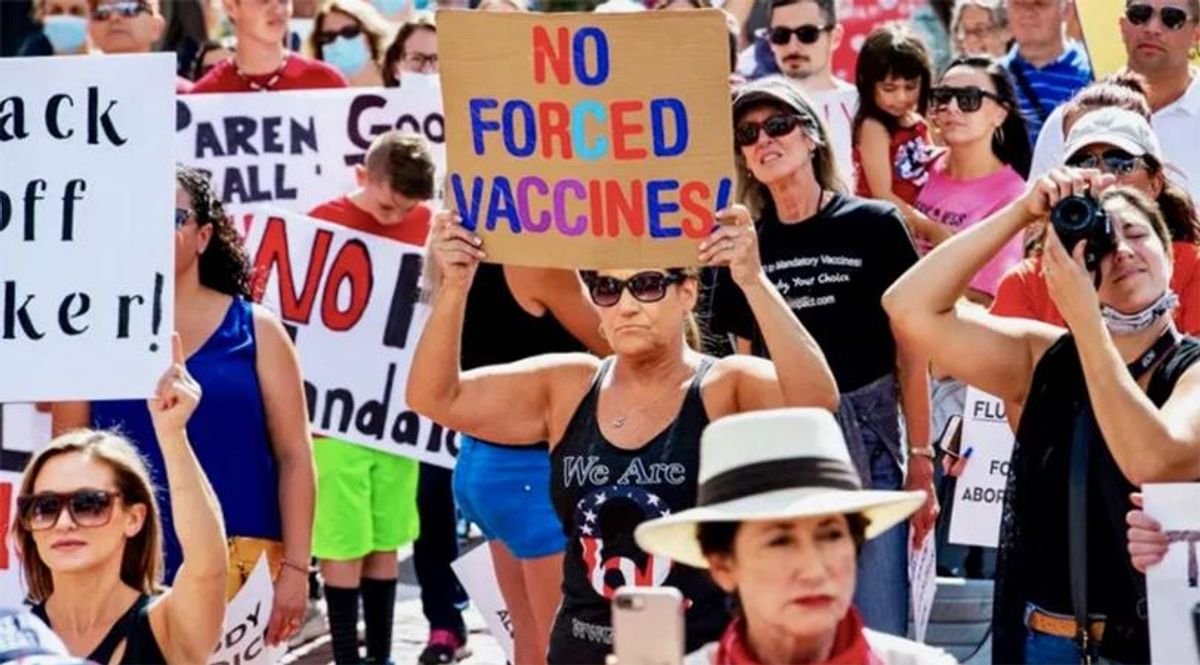 According to a report from Politico, health officials are becoming increasingly frustrated by the fact that Americans,in what is described as "Trump country," are refusing to get vaccinated against COVID-19 despite the increasing availability of multiple vaccines.

With Johnson and Johnson introducing a one-shot vaccine, health officials are rushing to get as many people as possible protected against the coronavirus that has taken the lives of over 525,000 Americans.

However, as the report, notes health workers are frustrated by people who still believe COVID-19 is a hoax -- in large part because of the comments made by former President Donald Trump.

As Politico's Joann Kenen wrote, "If a critical mass of people don't accept Covid-19 vaccines, the country won't achieve 'herd immunity.' When there was just a trickle of vaccines, hesitancy didn't matter as much because plenty of people were clamoring for the scarce shots. Now that the supply is ramping up, the challenge is to overcome fear, distrust and outright antagonism to the new vaccines shared by some groups in large numbers."

She added, "...the damage from months of mixed messaging about the virus's severity, whether from Trump world or social media, has been done, say public health experts and health care workers administering shots in rural America."

According to Mike Holmes, CEO of Scenic Rivers Health Services in Minnesota, "We've got fairly good trust — but there's a block of the community, or the population, who thinks that this is a hoax, that it's to exert control to limit people's freedom. That's a hard group to convince."

"We do a lot of talking," explained Beth Ann Wilmore, director of nursing at Mercy Community Healthcare in Nashville. "I educated myself and the team and our providers and nurses on what the vaccine is, and why we're giving it, and what it does."

According to conservative pollster Frank Luntz, selling vaccinations to a skeptical audience requires finessing the message, adding that lecturing and shaming don't work.

"Family is by far the most powerful motivator for vaccine acceptance," Luntz explained. "Significantly more Americans said they'd be most willing to take the vaccine for their family as opposed to 'your country,' 'the economy,' 'your community,' or 'your friends.'"

"Kaiser's most recent survey last month detected an encouraging shift out of the "wait and see" group. Those reporting they were 'eager' to get vaccinated had risen to 55 percent, up from 34 percent from December. But there was scant movement among the hard-line 'no' groups. For instance, the share of Republicans who said they would not get a shot under any circumstances, or only if forced to for work, dipped ever so slightly, from 24 percent to 22," Politico reports. "That represents a challenge to reaching herd immunity, which experts project will happen when 70 to 85 percent of the population is vaccinated."

"We see vaccination hesitancy with the flu vaccine every year — every year. And with the virus — because of the enormity of this pandemic, and the mixed messaging and the politicization… you end up with trust issues," lamented Melody Weaver, president of the Idaho Rural Health Association.