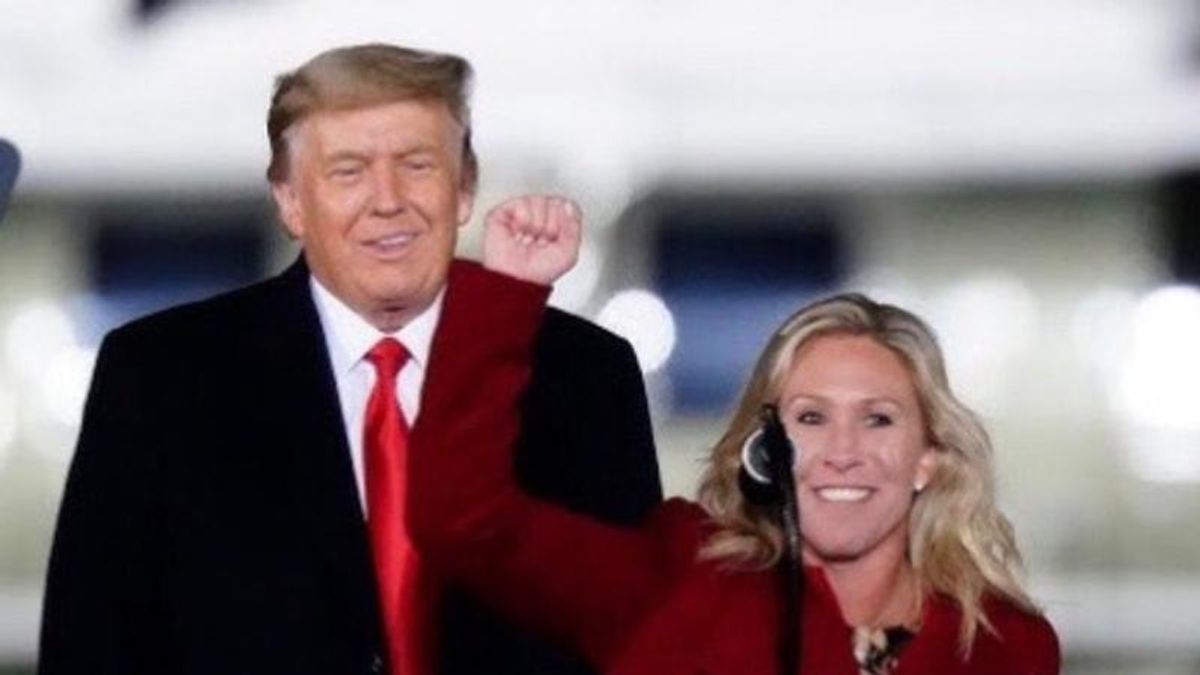 "If Joe Biden won the election then there is no need to worry," Greene claimed, even though it is a fact that Biden did win the election and the Arizona audit has been criticized for lacking any legitimacy.

She wrote that "since Arizona is doing such a great job with the Arizona audit, when will Georgia do the same for ALL of the Republicans in Georgia who have been screaming and demanding a full audit?"

"GA Republican voters who voted for all the Republicans in power want a full audit," she argued. "Why are elected GA Republican leaders refusing to do what their voters ask?"

"A full audit of the Nov 3rd election is needed in GA and the people deserve it," she argued, even though there is no evidence of widespread election fraud other than Donald Trump's attempts to overturn the election, for which he's facing a criminal investigation in Fulton County.

Speaking directly to Kemp, she said, "we need everyone in GA to trust our elections so that we can save Georgia in '22."

Here's some of what people were saying about Greene's Twitter thread:

Cyber Ninjas looking for bamboo because Q believes ballots were flown over from China and placed in ballot boxes? How fuqqing embarrassing is the GQP?
— Laura Costa 💟 (@LauraCo04347099) May 6, 2021

We did signature checks for 15k ballots in Cobb County, found only 2 bad signatures and neither were fraud, and you refuse to accept it

You will never accept Trump lost
— Noble Prize in Sarcasm (@rewegreatyet) May 6, 2021

This has already happened, under the watch of you Rep Gov. the only reason people are concerned about election integrity is because you have no integrity and will not let the results speak for themselves.
— David King (@davidsking2002) May 6, 2021

Georgia already did a full manual recount, and the results stayed the same 🙄
— 🦢🦋SomaPsycheYogi🦋🦢 (@SomaPsycheYogi) May 6, 2021

They're not doing a great job - they're likely violating federal law. https://t.co/MG0nomZqky
— The Fully Vaccinated Dorothea Brooke (@vigilabilis) May 6, 2021

The audit in AZ, is NOT transparent. What are YOU afraid of. Fair audits are done by both parties, not people who supported the insurrection.
— Wendy (@oldWVgirl) May 6, 2021

As a taxpayer, I object to any of my tax dollars going to a shady, trumpanzee firm called “Cyber Ninjas". I hope an impartial judge will rule that neither they nor any other shady group have any legal right to touch ballots.
Your side LOST get over it!
— Chui Bluengold (@Chuibluengold) May 6, 2021

The audit done by conspiracy theorists. Brilliant. Nothing shady there.
— sixfootfourman (@sixfootfourman) May 6, 2021

We've already PAID for several recounts and all of them confirm that Biden won.

Elections ARE transparent. You just don't like the result.
— Laurie Rodriguez (@ProfessorPongo) May 6, 2021