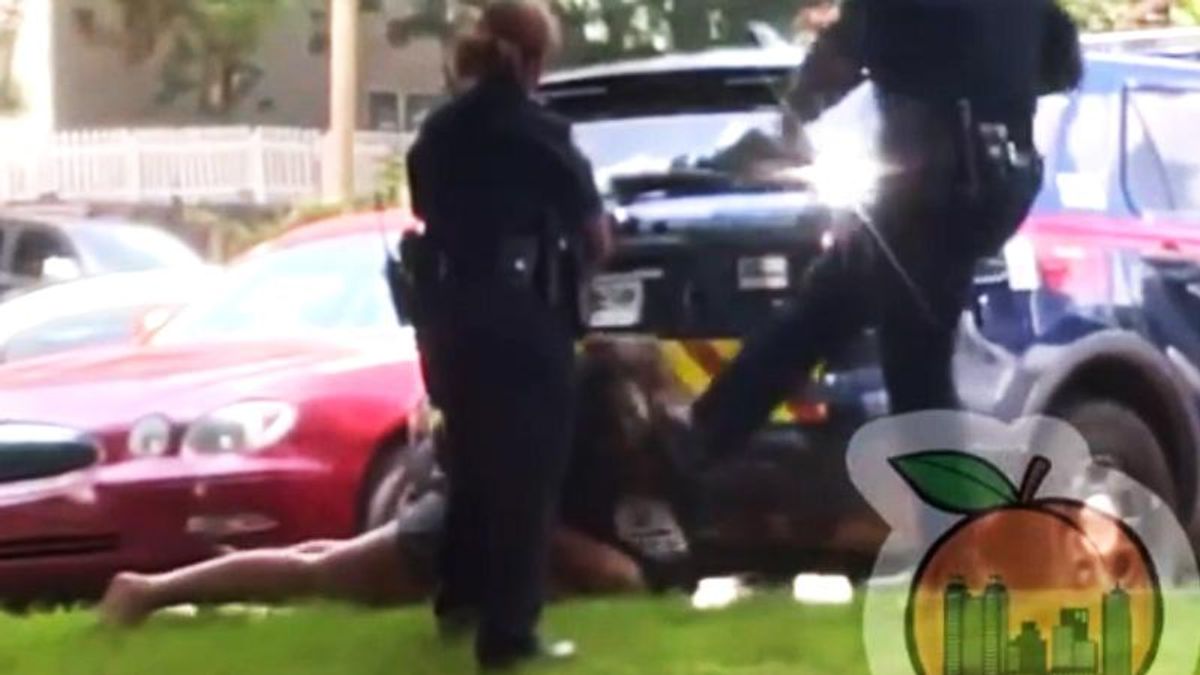 The Atlanta Police Department has suspended a sergeant who kicked a woman in the head while she was lying on the ground handcuffed, in an incident captured on video Monday.

The woman's neighbor, who filmed the video that quickly went viral after being posted on social media by Atlanta Uncensored, told the city's CBS affiliate that the sergeant was retaliating after the victim, who reportedly has mental-health issues, spat on his boot.

"She was spitting at the officer and then she had already spit on him once before but it didn't get on him, so she spit on him again and it got on his boots, and that's when he decided to kick her in the face," the neighbor said, adding that the officers had also kicked the victim previously, causing her to roll down a hill.

The neighbor said she and others later confronted the sergeant: "We was like, ' Why did you kick her?' He was like, 'I didn't kick her.' He didn't even know that somebody was recording."

The victim's aunt, Nell Gibson, told the station that the incident left her "totally horrified" and "speechless."

"Ashley does have some mental health problems," Gibson said of the victim. "We thought she was off her meds because she's been acting kind of off."

The Washington Post reported Monday night that the sergeant who kicked the woman had been suspended without pay, while the other officer seen in the video had been assigned to desk duty.

"Upon reviewing the video, the actions of the sergeant appear to be unacceptable and we are also concerned with the apparent lack of reaction from another officer present during the incident," the department said in a statement, adding that the chief and commanders only learned of the incident from the video. "The actions of those in the video appear to fall outside our standards and training. However, it is important for the Office of Professional Standards to conduct a thorough investigation to determine the facts surrounding this incident."

The department said the incident began when authorities received a call saying a woman walking around the area had pointed a gun at several people. After locating and detaining the woman, they became concerned with her mental health, and requested that she transported to a hospital for evaluation. She was not charged.

Gerald Griggs, vice president of Atlanta NAACP, told the city's Fox affiliate he was "shocked and angered" by the video. He called the department's statement "a step in the right direction," but said it is not enough. He called for the sergeant to be fired and the other officers present to face "strict punishment."

"You know we've been talking about community-police relations for a long time in Atlanta," Griggs said. "And to see something like that, a handcuffed individual kicked in the face, nothing justifies that. ... At no point should a citizen of Atlanta be kicked in the face while they're handcuffed."

Watch full reports from the CBS and Fox affiliates below.

Exclusive: Family and witness speak out over video shows APD officer kick a handcuffed woman in the www.youtube.com