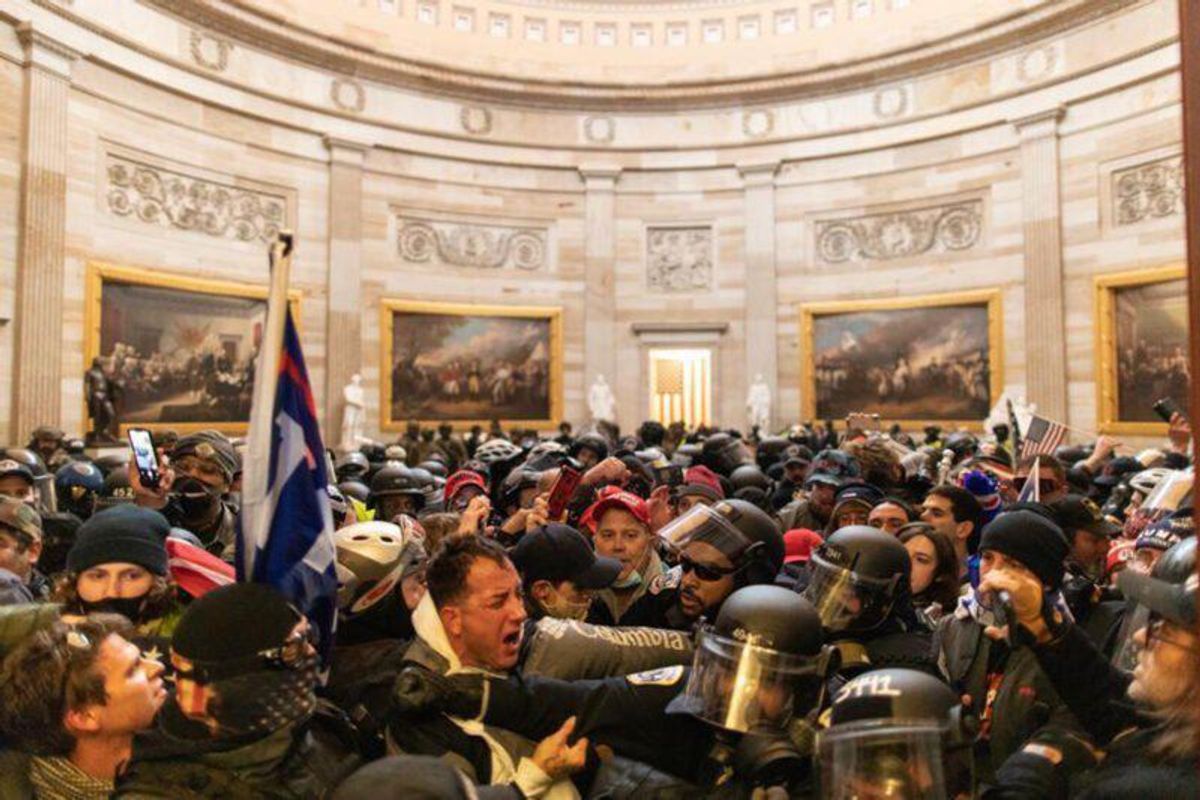 Many of the "MAGA tourists" who entered the U.S. Capitol during the Jan. 6 insurrection will probably avoid prison for their role in the deadly riot -- but legal experts say that's not simply because they're white conservatives.

Nearly a quarter of the 230-plus defendants who have been formally charged so far face only misdemeanors, and judges, prosecutors and defense attorneys have all signaled in recent days they don't expect many of those Donald Trump supporters to face significant penalties, reported Politico.

"My bet is a lot of these cases will get resolved and probably without prison time or jail time," said Erica Hashimoto, a Georgetown law professor and former federal public defender. "One of the core values of this country is that we can protest if we disagree with our government. Of course, some protests involve criminal acts, but as long as the people who are trying to express their view do not engage in violence, misdemeanors may be more appropriate than felonies."

Prosecutors have characterized the rioters' actions as an existential threat to U.S. democracy, but in essence many of them engaged in trespassing -- which carries a zero-to-six-month prison term for defendants with no significant criminal history.

"Trespass is as mild as we get," said Ohio State University law professor Douglas Berman, an authority on criminal sentencing. "There's really no way in which you can cook the books, or the guidelines, to do above zero to six. This is a case where the aggravating factors are not built into the book."

However, some defendants may receive stiffer penalties due to social media comments or video evidence from the insurrection showing they intended to prevent lawmakers from certifying Joe Biden's electoral win -- which resulted in felony obstruction of Congress charges.

The obstruction charge, which is essentially the same as obstruction of justice, carries a maximum penalty of 20 years in prison.

"The punishment has to be proportional to the harm, but I think for many of us, we'll never forget watching TV Jan. 6 and seeing people wilding out in the Capitol," said federal prosecutor Paul Butler, a Georgetown law professor. "Everybody who was there was complicit, but they're not all complicit to the same degree for the same harm."

Butler said first or second misdemeanors almost never result in jail time, and he hopes the disposition of some of the lesser charges result in a "teachable moment" for prosecutors.

"A lot of Black or brown people, they don't get the benefit of individual judgment or breaks," Butler said. "I think this will be a record number of white people who appear in federal criminal court in D.C. ... If they're receiving mercy, the prosecutor's office should make sure that same mercy will be applied to all the other people who they prosecute, who are mainly people of color and low-income people."

During a press conference at the White House this Wednesday, reporter Owen Jensen from the Catholic news network EWTN asked Jen Psaki a question regarding the Biden administration's move to reverse a Trump-era family planning policy.