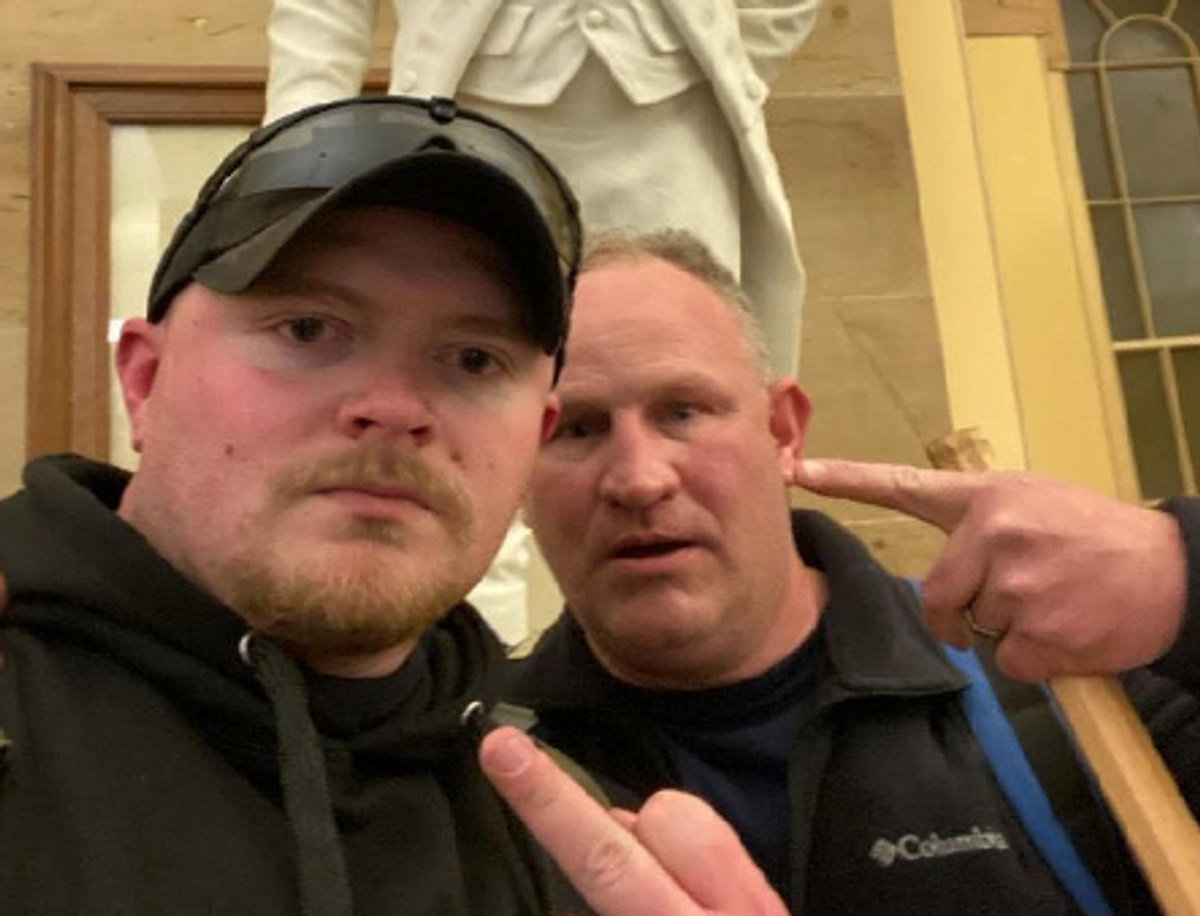 A federal judge has ruled that a Virginia police officer who breached the Capitol on January 6th must remain in detention after the FBI discovered he placed orders for 37 rifles valued at more than $50,000 following his indictment, and agents later found silencers, pipe-bomb materials and a M-4 rifle during a search of his property in rural Franklin County on June 29.

A 26-year law enforcement veteran, Robertson and another officer, Jacob Fracker, took part in the Jan. 6 assault on the Capitol while they were off duty from the Rocky Mount Police Department. Robertson served in the US Army from 1991 to 1994, when he graduated from ranger and sniper school, according to a motion filed by his lawyer. Later, in 2008, he deployed as an Army reservist to Iraq, where he conducted IED and sniper training for the Iraqi Army, and then in 2011 trained Afghan National Security Forces, sustaining severe wounds from gunshot and mortar shrapnel in Logar Province.

"There is probable cause to believe that Robertson committed a felony — willfully shipping or transporting firearms and ammunition despite being under felony indictment — while on pretrial release," Judge Christopher Cooper wrote in an order released on Wednesday. "Under the applicable statute, this finding gives rise to a rebuttable presumption that Robertson cannot be safely released into the community pending trial under any conditions. Robertson has not rebutted this presumption."

Following Robertson's January 29th indictment, the FBI obtained a search warrant to review his email and uncovered what the government describes as "evidence that Robertson was involved in the purchase, sale, and possession of firearms and ammunition."

A June 30th motion filed by the government cited multiple purchases beginning on February 14th and continuing through April 12th, with suppliers in eight different states shipping rifles and ammunition, including more than 1,000 armor-piercing rounds. FBI agents learned that Robertson had the armaments shipped to Tactical Operations, a Roanoke gun dealership that holds a federal firearms license. Later, between June 29th and July 1st, another three firearms were received by Tactical Operations on Robertson's behalf, bringing the total to 37.

Robertson's lawyer, Mark M. Rollins, did not dispute the purchases during a hearing in DC District Court on Wednesday.

During a June 29th raid on Robertson's house in Franklin County, FBI agents discovered a loaded M4 rifle on Robertson's bedroom dresser, along with four silencers and a partially assembled pipe bomb.

Rollins argued that the armaments purchases didn't violate Robertson's conditions of release because there are adequate safeguards to prevent him from taking possession of the weapons.

"Those firearms are under the possession of the FFL and he could not take possession," Rollins told the court. "The purchaser and the FFL fill out a Department of Justice form. They check off the boxes that are appropriate. One of the questions on there is whether you're under indictment."

Federal prosecutor Elizabeth Ann Aloi argued in response that it doesn't matter whether Robertson technically possessed the firearms or not, adding, "He asked someone else to hold his guns, and he took advantage of the fact that he had access to the FFL to visit his guns."

The government has also cited a June 10th comment by Robertson on a forum at the Gunbroker.com website, where he arranged some of the purchases, to show his contempt for the prosecution.

"They are trying to teach us a lesson," Robertson wrote. "They have. But it's definitely not the intended lesson. I have learned that if you peacefully protest then you will be arrested, fired, be put on a no-fly list, have your name smeared and address released by the FBI so every loon in the US can send you hate mail.

"I have learned very well that if you dip your toe into the Rubicon… cross it," Robertson continued. "Cross it hard and violent and play for all the marbles."

Aloi also cited comments by Robertson on Facebook two days after the insurrection, in which he wrote, "Well… F*** you. Being nice, polite, writing letters and sending emails hasn't worked…. All that's left is violence and YOU and your 'Friends on the other side of the isle' have pushed Americans into that corner. The picture of Senators cowering on the floor with genuine fear on their faces is the most American thing I have seen in my life. Once… for real… you people ACTUALLY realized who you work for."

On the same day, Robertson wrote in another comment on Facebook: "Peace is done. Now is the time for all the braggart 'Patriots' to buckle armor or shut the f*** up. Facebook warriors time is done. The next revolution started 1/6/21 in case you 'Im ready' and 'standing by' guys missed it."

Robertson is currently locked up in the Central Virginia Regional Jail, about 75 miles northwest of Richmond, where he was placed after Magistrate Judge G. Michael Harvey granted the government's motion for detention on July 9. Because he is a former police officer, Robertson is being housed apart from the rest of the inmate population.

"He's been detained for over a week," Rollins told Judge Christopher Cooper on Wednesday. "You've gotten his attention. He's been locked up 23 hours a day. Detention for him is a lot more intense because of the isolation."

Aloi told Cooper on Wednesday: "I don't think you could say no harm no foul. He's asking for home detention, but he has these things in his home. He is shopping for and arranging for the transport of an arsenal, and he is advocating for violence both in the immediate aftermath of the insurrection and as recently as June 10."

Reading from Robertson's statements, Aloi concluded, "That does not sound like someone who intended no harm no foul, with someone who ordered 37 firearms and has a disassembled pipe bomb."

At the end of the hearing, Judge Cooper said he was not ready to make a decision on Robertson's detention, saying the Department of Justice gun transfer forms in particular raised issues he would need to look at more closely.

"I will take this under advisement and get something out quickly," he said.

During Wednesday's hearing, Aloi hinted that Robertson's son could potentially face a perjury charge in connection with his testimony that the M4 rifle that was discovered on June 29 belonged to him.

"The M4 rifle that was on the bed — does that rifle belong to you?" Rollins asked Hunter Robertson under direct examination on Wednesday.

In a brief filed on July 12th, the government described the June 29th raid on the Robertson home at which Hunter Robertson was present. According to the government, agents asked Robertson "if he had any personal firearms stored in the house," and Robertson responded by disclosing that he had a gun in his truck, making no mention of the M4 rifle.

"After finding the M4 rifle in the defendant's bedroom, law enforcement also asked the defendant's son if the gun was his, and he declined to provide any information about it," the government said in its brief.

Aloi told Judge Cooper that she had not received notice that Hunter Robertson would be testifying on Wednesday.

"The testimony he has given is inconsistent with the statement he gave to law enforcement on June 29," she said. "I don't feel comfortable inquiring of this witness without compromising his Fifth Amendment rights."

Cooper granted Aloi's request for a short recess so she could consult with her supervisor. When court resumed, Aloi said the government deemed Hunter Robertson's testimony to be "peripheral to the resolution of the motion," but Cooper agreed to allow the government to revisit the matter should he decline the motion for detention. Aloi also suggested during the hearing that Hunter Robertson should retain his own counsel.

The 21-year-old Hunter Robertson, who recently left the US Army, testified that he asked his father if he could come to the house on June 29th for firearms practice. He said his father told him he had planned to be gone all day.

"We have little ranges set up where we target practice and stuff like that," Robertson testified. He told the court that he set the rifle on his father's bed when he went inside the house "because right next to the bed there's a gun safe that has ammo."

Hunter Robertson testified that he heard dogs barking and discovered "15-20 FBI agents or task force officers pointing guns at me and asking me to step out of the house." He said they placed him in handcuffs and held him about 30 feet away from the house while they conducted the search.

This is not the first firearms violation Robertson has committed since he was arrested.

When Robertson was released from custody on January 13th, the government noted, a magistrate judge in Roanoke ordered him to relocate any firearms from his house within two days. But on January 19th, while executing a search warrant at Robertson's home, law enforcement reportedly seized eight firearms.

"The particular facts of this case — the nature and circumstances of the offense charged — are uniquely disturbing," Aloi and co-counsel Risa Berkower wrote in their motion for detention. "The defendant, holding a position of public trust as a police officer, traveled to the District of Columbia and participated in one of the most riotous acts of insurrection the nation has ever seen. Then, he repeatedly and flagrantly disregarded the court's orders to not possess firearms despite being admonished for violating this condition of his release shortly after his initial arrest.

"The defendant's possession of an explosive device and firearms, coupled with his extreme rhetoric advocating for violence indicating no remorse," they concluded, "illustrate that the pending charges are unlikely to serve as a deterrent to future violence."