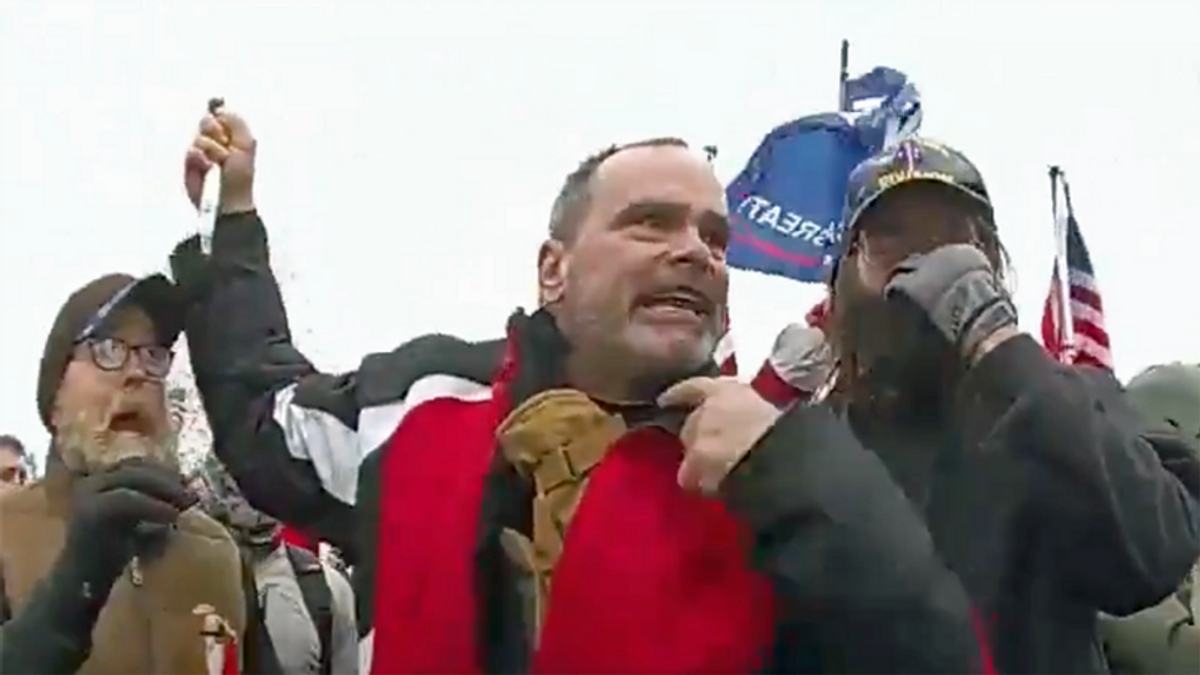 "Webster said he was not trying to gouge the officer's eyes, but called grabbing his mask a kind of defensive maneuver: 'a hockey type of move type thing where you don't want to fight somebody,'" the Times reports.

Webster's former NYPD colleagues told the Times they were shocked to learn that he committed one of the more violent attacks during the insurrection, after he apparently got swept up online in former president Donald Trump's false claims of fraud in the 2020 presidential election.

"He was not known for voicing political extremes, had no social media presence or ties to extremist groups, and once worked to protect the halls of New York City governance," the Times reports. "Now he had attacked an officer doing essentially the same duty in Washington, charging at a man who, one may imagine, looked to be both enemy and mirrored reflection."

Webster, a former Marine, had retired from NYPD and started a landscaping company, Semper Fi, in Florida, New York. He has a wife and three children, and his neighbors described him as "a cheerful family man with little visible interest in politics." He taught local children how to ride ATVs, and would mow the lawns of sick neighbors without even telling them.

Webster told FBI agents he had never protested before and on the day of the insurrection, he "just went down there just to show support for something." However, prosecutors have pointed out that Webster came to Washington "armed and ready for battle" with body armor, a map of the area, M.R.E.s, and a handgun, the Times reports.

Webster also claimed he was acting in self-defense — saying he had been sucker-punched — when he slammed through a police barricade and attacked a Capitol officer using his Marine flagpole, yelling "Commie" and shouting profanities.

"You wanna attack Americans?" he shouted, challenging the Capitol officers to "take your sh*t (body armor) off."

"In seconds, he and the officer are on the ground, Mr. Webster on top, reaching down for the officer's gas mask," the Times reports. "The officer later told investigators that he was being choked by his own chin strap and could not breathe for 10 seconds."

Webster then quickly disappeared into the crowd, but later looked into another man's camera outside the Capitol and said, "Send more patriots. We need some help."

Following a weeks-long manhunt that played out online, thanks to video and images released by the FBI, Webster turned himself in on Feb. 22. He was initially denied bond and spent four months in jail before being released, following a hearing during which his attorney said the weapon he used — a flagpole — weighs less than a pound, and claimed his client was angry because he had seen the Capitol officer push a woman to the ground earlier.

Webster is now on house arrest pending trial, barred from having firearms or using the Internet. He declined comment when a reporter from the Times knocked on his door.

Watch the full video from Webster's attack on the Capitol officer below.