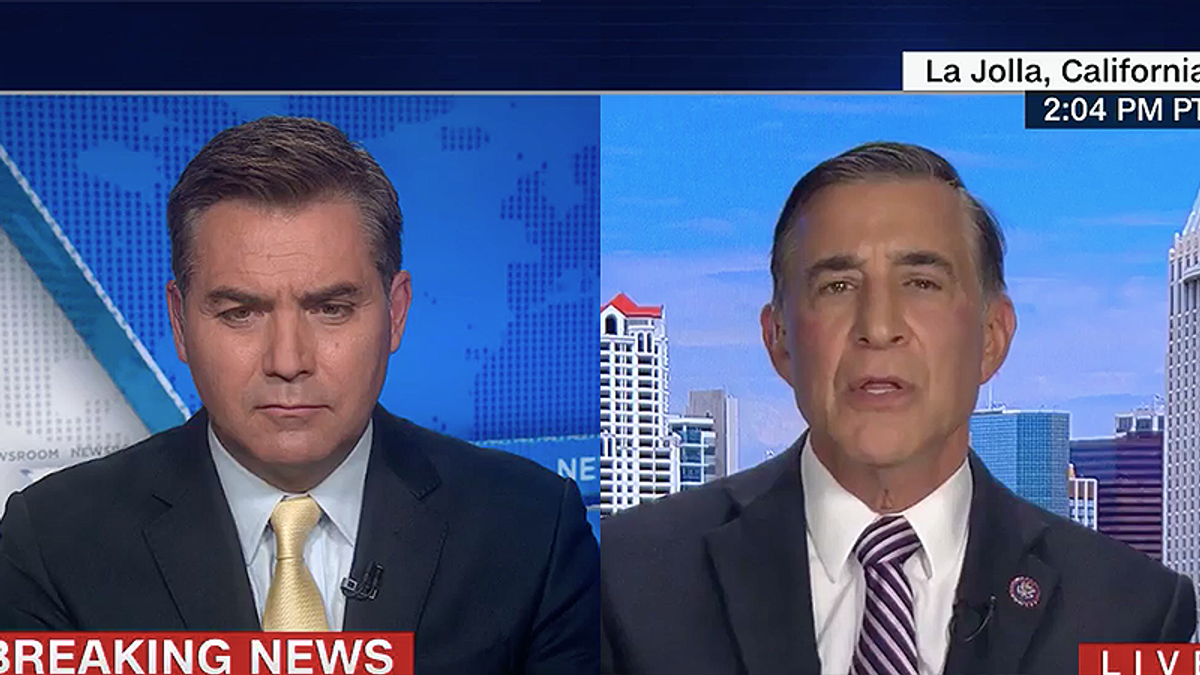 Rep. Darrell Issa (R-CA) appeared on CNN Sunday to complain about President Joe Biden's withdrawal of Afghanistan, but he ended up "disgusting" the host after a comment about a woman radio host Larry Elder threatened.

Issa began the segment by telling CNN's Jim Acosta that Biden has rejected everything that former President Donald Trump did. Acosta then pointed out that Biden didn't reject the peace agreement with the Taliban that Trump and former Secretary of State Mike Pompeo negotiated.

"You supported the pullout of the US from Afghanistan," Acosta said, calling Issa out.

"I supported and would continue to support an ongoing military presence at the airbase for strategic purposes," Issa said, changing his position.

"We have peace in South Korea and we have 28,000 troops there." Issa said, making an argument to maintain a base in Afghanistan.

Issa also called out the visas Afghan citizens were desperately waiting for. Acosta fact-checked him in real-time, saying that anti-immigrant firebrands in the Trump administration were actively working against those, slowing the process to a crawl.

But it was when Acosta asked about Elder as the GOP front-runner in the California gubernatorial election that Issa "disgusted" the host.

"I want to ask about the recall election to replace Gavin Newsom. Right now, the Republican front-runner is an outspoken talk show host named Larry Elder. He's made disparaging remarks about women," Acosta said before playing the recording. "Do you think Larry Elder should be the next governor of California?"

"I think Larry Elder, with tens of thousands of hours on the air, entertaining and thought-provoking, if that's the --" Issa said before Acosta cut him off.

"That's not entertaining. That's disgusting. What he said is disgusting," said Acosta.

"I appreciate, Jim, your saying it's disgusting. That certainly was, by most people's standards, a quip of a radio talk show person who, like plenty of the famous ones, including Rush Limbaugh, who used various statements, including some bombastic statements from time to time, to make a point," said Issa, refusing to denounce the comments. "In tens of thousands of hours, if that's the best you have, you don't really have anything on Larry Elder."

"Oh, there's lots of other material, as you know, Congressman," Acosta assured Issa. "We don't have time to go through all of it."