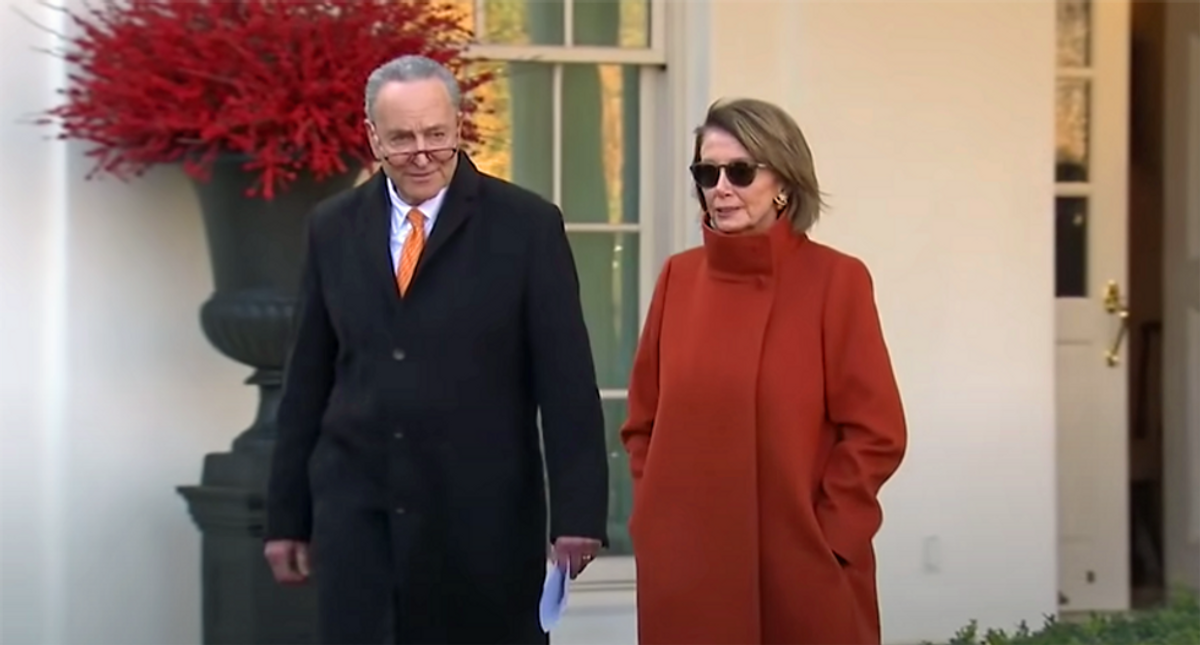 Speaking to Daily Beast columnist Wajahat Ali, a collection of leading commentators walked through what it would look like if Democrats were actually willing to fight back against Republican obstructionism.

Former impeachment lawyer Norm Eisen, legal scholar Larry Sabato, ex-Breitbart staffer Kurt Bardella and author and researcher Sarah Kendzior walked through what Democrats must be willing to do if they are ready to fight for the American democracy.

Former President Donald Trump has decided that the latest conspiracy theory confirms that he will be reinstated as president in August. It's unclear how that will happen, but there's a concern that talk of a coup could bring another attack in Washington, D.C. Democrats have responded to the threats and conspiracies "with nothing more than some strongly worded rhetoric and finger-wagging," wrote Ali. It was Democrats in Texas who were willing to do whatever it took to protect democracy and voting rights in their state. So, some are wondering when federal Democrats will be willing to step up.

Calling it an "instrument of Jim Crow," Ali said that the first thing Democrats must do is to nuke the filibuster. He's made the case about killing the filibuster, but Republicans aren't even using the actual filibuster. The rule Democrats like Sen. Joe Manchin (D-WV) and Kyrsten Sinema (D-AZ) support is the anonymous threat of a filibuster. Ali wants to throw it all out entirely.

"Biden just needs 50 votes in the Senate to kill the filibuster, but unfortunately we can't have nice things thanks to Senators Joe Manchin, who is perpetually 'deeply disappointed in the GOP and prepared to do nothing' yet still believes in a magical unicorn known as bipartisanship, and Kristen Sinema, whose sole talents so far appears to be her remarkable lack of accountability and tone-deaf responses to progressive causes, such as giving a thumbs-down vote and curtsy to a minimum wage increase while wearing a Lululemon bag," Ali wrote.

He demanded that Manchin and Sinema be forced to answer publicly for why they support an instrument of Jim Crow.

Norm Eisen told Ali that Democrats must step up to defend voting rights or they will lose their power for another generation. What Texas Democrats were willing to do should be a model for the party, he said.

"Was it wrong to do one thing they had in their power? No. It was right. You have to fight with every tool you have," he told Ali.

Former Breitbart staffer turned Democratic adviser Kurt Bardella called REpublicans the "arsonists at the crime scene." He encouraged Democrats to do what Republicans did during former President Barack Obama's administration, with over 100 subpoenas, countless depositions, multiple investigations and hearings over Benghazi and Hillary Clintons' emails. These are all powers of the majority if Democrats were willing to fight.

"With Trump and his acolytes, there's actual evidence of criminal behavior that demands legitimate oversight and investigation," wrote Ali. "Speaker Pelosi must jettison any hope for a bipartisan inquiry into the Jan. 6 insurrection and have Democrats initiate it on their own, issuing subpoenas and calling witnesses to hold their Republican colleagues who incited and supported the mob to account. Democrats should use all the levers of oversight they have at their disposal and bring transparency and accountability to Trump's malfeasance, criminality and abuse of power, dragging along any accomplices along the way."

Bardella warned, "we are running out of time. History will repeat itself and it will probably be much worse and violent." Indeed, Trump supporters are already calling for a coup and Trump appears to think it'll come in August.

Larry Sabato doesn't understand why Democrats aren't flooding the media with their messages. During the Trump administration, the president delivered speeches, spoke out, and railed against his enemies daily. While that might be unbecoming to Biden, he has hundreds of Democrats at his disposal who could be dispatched and scheduled all over local and national news to spread his message and fight for a Democratic agenda.

Not only would it help get the country behind the legislation, but it would also help build national support for Democrats fighting for those policies.

"It is vital for voters to understand just how critical the situation is. Our democratic institutions are in disarray or decay," said Sabato. He said that Biden's comments in Tulsa over the weekend saying, and his comments over Memorial Day where he said, "democracy itself is in peril" is a good start, but it needs to be hammered home non-stop until victory.

Ali's other demand is that Democrats should be building up Black women who are fighting all over the country for voting rights. If there's one thing the successes of Stacey Abrams has shown, it's that more women like her should be given the funding to employ similar strategies across the country.

It's clear that the Republicans are working with Manchin and Sinema. It was even more obvious when Sinema claimed to support the filibuster while standing next to top Republican Sen. John Cornyn (R-TX) while she said it. Republicans have brought Sinema and Manchin into their coalition and Democrats must do the same.

While there are a lot of disagreements among people like Reps. Liz Cheney (R-WY), Adam Kinzinger (R-IL) and Sens. Mitt Romney (R-UT) and Lisa Murkowski (R-AK), there are more things that they do agree with Democrats on. Since Republicans have decided to "cancel" those officials, there's a new place for them to work with Democrats on actual bipartisan legislation and cut deals with them and their followers.

Eisen thinks it's more plausible than Ali, but watching Republicans implode due to scandals with Marjorie Greene, Matt Gaetz and Paul Gosar could send other Republicans looking for sanity.

"Biden and Democrats have what could be their last chance to save democracy and promote progressive values at the same time but they have to stop playing nice and finally throw down and use the powers that the people trusted them with while they still have them, to get it done by any legal means necessary," Ali closed.

Read the full column at the Daily Beast.