GOP in disarray as Trump pits  Republicans against each other: report 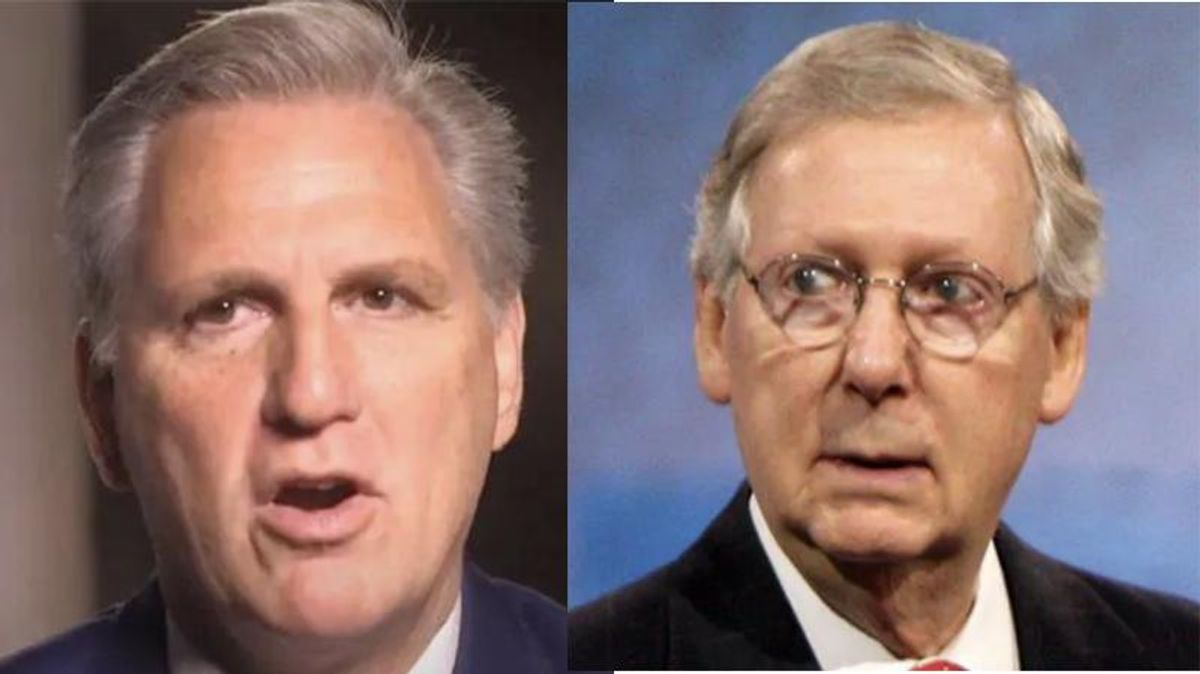 According to a report from the Daily Beast's Sam Brodey, Donald Trump is creating a schism within the GOP by prompting House Republicans to battle GOP senators who are working with Democrats to get an infrastructure bill done.

As the report notes, nearly one-third of the Republican Senate caucus has indicated they will vote on the massive bill, estimated to come in at about $3.5 trillion.

Trump was infuriated with Senate Minority Leader Mitch McConnell (R-KY) for not keeping his caucus in line by refusing to work with Democrats on the bill, while House Minority Leader Kevin McCarthy (R-CA) has been leading the charge against the bill that could boost President Joe Biden.

As Brodey wrote, Trump has been egging on Republicans to oppose the bill -- which is similar to one proposed during his administration -- and House members have been heeding his call while Senate Republicans have been ignoring him.

"Over the weekend, 18 GOP senators—more than a third of the conference—voted to advance legislation to fund roads, transit systems, broadband, and more, which they negotiated with President Joe Biden and congressional Democrats." Brodey reported. "A fuming Trump, who'd criticized the bill previously, responded to the defections by blasting out a series of lengthy statements slamming the bill as a RINO-backed 'disgrace,' insulting the intelligence of Minority Leader Mitch McConnell (R-KY), and threatening to withhold endorsements for any lawmaker who voted for the package."

"If Trump's freeform post-presidency musings have tended to land like insignificant shouts into the void, that message seemingly did not. Since the Senate moved forward with the bill last week, House Republicans have increasingly leapt to the MAGA line on the package: that it's a boondoggle that will pave the way to socialism," he continued before adding, "The ex-president's opposition to this bill appears grounded in the petty and the political, denying Biden a win and leaning into his preferred 2022 midterm narratives."

That has led some Republicans in the Senate to push back against their House counterparts and Trump.

Speaking of Trump, Sen John Cornyn (R-TX) explained, "Obviously, he still has some clout. But to me, the most important thing in any vote is not who supports it or doesn't support it in terms of non-constituents, but whether your constituents support it."

"He didn't give one reason why it's a bad deal, other than it's Joe Biden's," stated Sen. Kevin Cramer (R-ND) in a recent Fox News interview.

According to the Beast report, the war over the infrastructure bill is bringing to the surface a war within the legislative branch that has been going on behind the scenes for some time.

"Since Jan. 6, the House GOP has increasingly solidified into a MAGA cheering section as their Senate counterparts have mostly sought to move past Trump. The divergence has been clear on key votes and in the behavior of each chamber's leaders: Minority Leader Kevin McCarthy (R-CA) is deep in the Trump fold while McConnell is effectively persona non grata," Brodey wrote. "The bipartisan infrastructure deal could provide one of the starkest split-screens yet this year between the two wings of the GOP on Capitol Hill, and show how enduring the ex-president's influence is as he clings to his role as de facto party leader leading the charge against Biden's agenda."

To illustrate the point, one GOP aide said of Trump's opposition to the bill, "isn't even that coherent," but House Republicans will likely fall in line with his wishes.

Another Republican aide candidly stated, "If we're ever gonna get off the Trump drug, he just needs to take a bunch of L's."