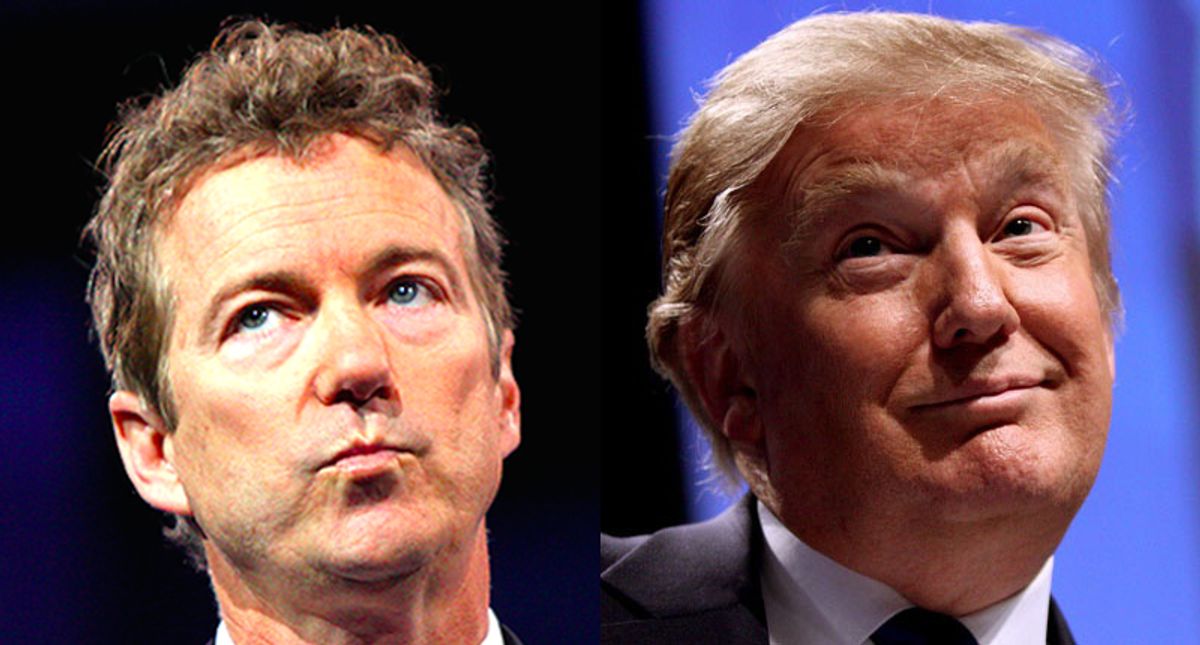 It has been three weeks since the U.S. Capitol came under attack in an attempt to overthrow the 2020 election. In that time the Republican Party has gone from shock and demands for accountability to "move on" as Senate Republicans look for a way to excuse former President Donald Trump's behavior leading the charge.

Writing for the Washington Post, Aaron Blake outlined the five ways that Republicans are working to make the impeachment trial disappear.

First, the GOP has claimed that the impeachment trial is "too divisive" in a new era when President Joe Biden is calling for "unity." CNN's Brianna Keilar gave several arguments against the claim. Showing clips of videos of GOP members who spread 2020 election lies, she alleged, "they are kowtowing to insurrectionists. To racists. To conspiracy theorists."

Many Republicans even predicted that this would happen under Trump, only to later justify the behavior.

"Such divisiveness is only part of the equation. It should always be measured against both the nature of the alleged high crime and the need for accountability," wrote Blake. He also noted that it's worth looking at how we became so divisive to begin with, and how to stop that behavior through accountability.

The second excuse the GOP is using is the claim that impeachment is unconstitutional. There was already a vote to impeach Donald Trump on Jan. 13, before he left office. The Constitution doesn't spell out that someone can be impeached but somehow can't be tried. In fact, it spells out specifically how to use impeachment to bar that person from being able to hold office again. As Sen. Chuck Schumer (D-NY) said on the Senate floor, the Constitution wouldn't have that provision in there if it didn't intend to apply it to people out of office.

Writing for USA Today, Norm Eisen, who served as counsel in the first impeachment of Trump, explained that the Senate has no business even voting on whether impeachment is Constitutional because its role, as outlined in the Constitution, is to hold the trial. He accused Republicans of using the tactic to avoid even talking about holding Trump accountable, much less actually doing so.

Another excuse Republicans have begun using is that the trial is "too rushed." Ironically, the GOP is making this claim at the same time they're arguing to "move on." The vote has already happened and Trump has been impeached. Already Republicans were granted two weeks to prepare for the trial.

In the time since the impeachment vote in the House and the trial in the Senate, a slew of Trump supporters who were arrested for the Capitol insurrection, have named the former president as telling them to do it. The number of activists explaining that in court is only going to grow.

Sen. Lindsey Graham (R-SC) lamented that Trump wasn't even given a hearing ahead of the impeachment. Some legal experts have asked why the House would even need one since they were the witnesses to the crime. In fact, the Senators are too. If Republicans took issue with the impeachment vote happening before a hearing they should have raised it before the trial began. The impeachment vote already happened and any objection to it, as Eisen explained, is moot.

The President of the United States was impeached in 50 hours without 1 witness being called and he didn’t have a la… https://t.co/bmGIyOeEXS
— Lindsey Graham (@Lindsey Graham)1611759991.0

The fourth claim from Republicans is that it's what "the Third World" does. Sen. Marco Rubio (R-FL), who predicted that such violence would occur when he ran in 2016, is now making excuses.

"This is terrible for the country. It sets a terrible precedent. Only in the Third World do you see this habitual use of prosecutions of former leaders," he said. "You go through Latin America; virtually every immediate past president is under indictment or in jail."

It's ironic because in 2016, Rubio said almost the same thing to justify getting rid of Trump.

"There's only one presidential candidate who has violence at their events," Rubio said. He went on to warn that "words have consequences" and Trump was responsible for his supporters' behavior. At a campaign event he went on to equate Trump to a "third-world strongmen" and predicted a "reckoning" after the 2016 election.

"You mark my words, there will be prominent people in American politics who will spend years explaining to people how they fell into this," he said.

Finally, Republicans are trying to claim that Democrats are somehow just as culpable.

"Is that not incitement?" he asked.

It's difficult to blame someone for inciting violence when they didn't incite the violence. If Republicans want to hold that trial, they can obviously propose that legislation and hold a vote on it.