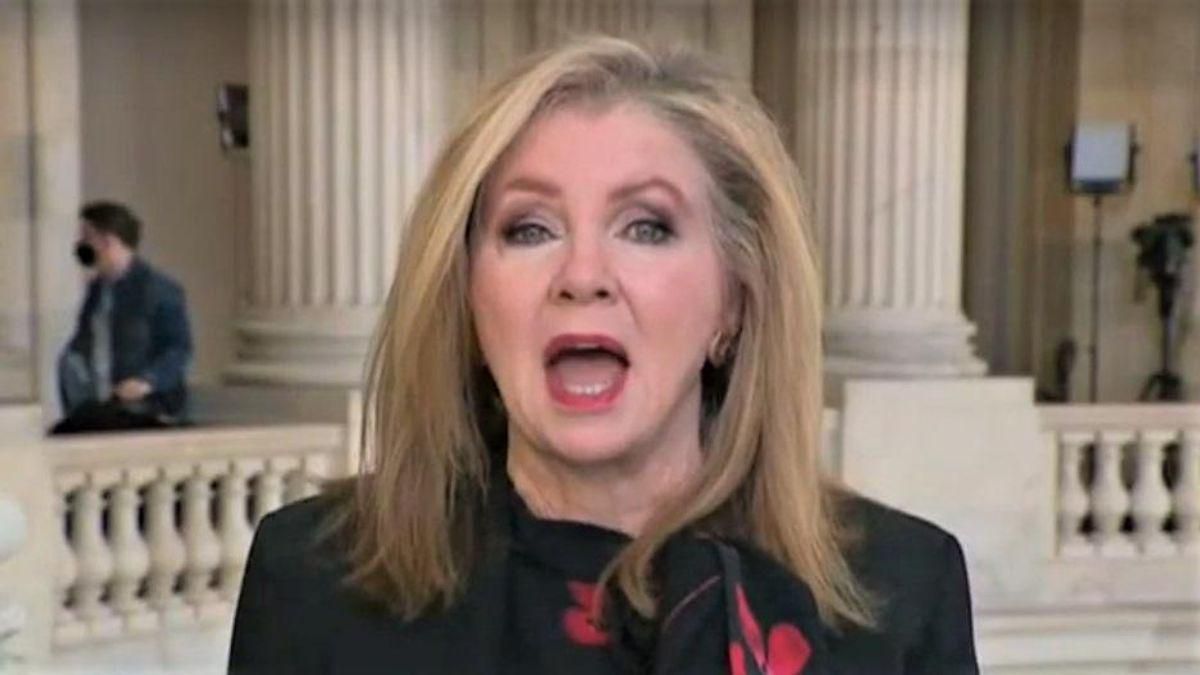 U.S. Senator Marsha Blackburn (R-TN) is continuing her agenda of actively attacking everything Democrats do, to the point she is becoming like a more experienced Marjorie Taylor Greene or Lauren Boebert.

On Wednesday Blackburn posted a Twitter thread filled with graphics she appeared to see as attacking President Joe Biden's $2 trillion infrastructure bill. As the far-right Tennessee conservative may learn, the legislation is extraordinarily popular with the American people – Democratic and Republican voters alike.

Blackburn is among the most extreme GOP Senators, with just four (Ernst, Cruz, Cotton, and Inhofe) being even more far-right than she is. She is also rated below average in leadership, according to GovTrack, a non-partisan website that tracks Congress.

Biden's 'infrastructure' proposal is the latest attempt to push through a liberal agenda.
Take a look at what Biden wants taxpayer dollars going towards: pic.twitter.com/bkDXSEWFow — Sen. Marsha Blackburn (@MarshaBlackburn) April 7, 2021

The DNC liked it so much they "stole" it (her logo is still at the top):

.@POTUS's jobs plan makes needed investments in caregiving—giving seniors and people with disabilities the care they need while giving care workers the raise they deserve. pic.twitter.com/WDpEgnniLg
— The Democrats (@TheDemocrats) April 7, 2021

It didn't go well for her. Take a look:

You're just further proof how utterly beyond salvaging today's GOP is. Each of you Republican Senators is just a soulless husk void of a heart, morals, or any ideas of value-- mere grifters and racists willing to say and do anything for money, the future be damned. What a legacy.
— Mikko Alanne (@MikkoAlanne) April 7, 2021

Hey, remember how Texas' infrastructure went down for a week or more because the electric grid wasn't equipped for climate change? Yeah. This is about infrastructure, lady.
— Fiona Taylor (@fionaleslie) April 7, 2021

Tennessee has been hit with countless storm, this would useful even for your state
— Denise Wu (@denisewu) April 7, 2021

Exactly. As Pete Buttigieg told Fox "News" commentators, the fact that Texans were having to gather up snow in their bathtubs to melt for water to be able to flush their toilets SHOULD NEVER BE HAPPENING IN THE U.S. Infrastructure is now QUITE POPULAR.
— Susan Urban (@urbanswirl) April 7, 2021

Weird that a majority of Republicans like it though pic.twitter.com/sXI3HAOCMN
— José (@josecanyousee) April 7, 2021

Marsha seeing as how you don't know the definition of infrastructure and more than likely don't own a dictionary ill help you out. pic.twitter.com/lORCOpCJqt
— Barely Gaming (@BarelyGamingYT) April 7, 2021

The American Jobs Plan. Here is a breakdown of the proposed spending and how it surveys among 2,000 Americans. You might want to get onboard with this. pic.twitter.com/ek0UpJ8V5o
— Sterling Rose 💉 (@SterlingRose62) April 7, 2021

It would certainly be an improvement over a conservative agenda -- cut taxes, deplete the country, no investments in anything, no long term maintenance, just use everything up. Hope he is successful!
— Fran Caron (@FCaron9) April 7, 2021

I work in agriculture and climate change is the biggest issue that my business faces. I can't fund a legitimate study on my own. Thanks for showing how you don't care about my needs as a small business owner.
— John Ashmore (@jsmashmore) April 7, 2021

This woman is a fucking idiot. There is no way to sugarcoat it. She is an abject idiot. https://t.co/iXjuKliMAV
— The Hoarse Whisperer (@TheRealHoarse) April 7, 2021

You don't see the connection between climate change and infrastructure? Rising sea levels won't have any impact on roads and distribution in coastal areas? 🤦🏻♀️
— Lenabenas (@lenabenas21) April 7, 2021

2 Once again, Republicans are against what the majority of Americans want https://t.co/epXW83JGQ7
— Maggie Jordan (@MaggieJordanACN) April 7, 2021

You know what has to hold up against climate change? Infrastructure.
— Michael Wearamask Ditto (@janus303) April 7, 2021

How the hell are any of these things "liberal"??
Seems more like middle-of-the-road items that have been neglected for too long and need help: pic.twitter.com/DxKuziPxBA — AvgJoe (@BVJoehnk) April 7, 2021

🚨🚨 So proud to announce that @MarshaBlackburn has joined the DNC creative team and is banging out graphics touting the Biden-Harris jobs plan that will **also** help us care for our rapidly growing elderly population. Thanks, Marsha! https://t.co/M0fEfl4aTW
— Sam Cornale (@samcornale) April 7, 2021